In America it is regularly among the top ten most popular pedigree cats, in Germany it is still quite unknown: the American Shorthair, or American Shorthair, as it is also known. She is wrongly given little attention because the four-legged beauty is an ideal beginner’s cat with her balanced nature and her robust health and people with cat experience will have a lot of fun with the lively American.

History of the American Shorthair

The American Shorthair, the British Shorthair, and the European Shorthair share common ancestors. It was the Romans who brought cats to Central Europe and Great Britain in ancient times. The cats on the island and those on the European mainland developed differently and adapted to the circumstances. When settlers began migrating to America, they also took cats with them to their new world.

For example, it is well known that cats were passengers on the famous Mayflower, a sailing ship that left Plymouth in 1620 and brought the first settlers to New England. The settlers who started from the mainland also took their four-legged friends with them on the journey. The animals already had to prove their robustness during the crossing. They took on mice and even rats that wanted to eat the supplies on the ships.

In their new home, too, they kept the barns and storehouses free of mice and rats. Many of the cats lived semi-feral near humans and only the strongest and best hunters survived and were able to reproduce. Through the centuries there have been interbreedings, both of the two branches and with other breeds of cats. At the beginning of the 20th century, dedicated breeders wanted to prevent this original cat species from disappearing.

They began breeding under the name Domestic Shorthair. A breed standard was established that not only refers to the appearance but also to the character of the cats. In 1966, the breed was renamed American Shorthair, on the one hand, to emphasize its origin and on the other hand to clearly distinguish it from domestic cats without a breed standard. In Europe, however, the breed still has a hard time gaining a foothold. It is still not recognized by some breeding associations.

Like their ancestors, the American Shorthair has a strong hunting instinct. In the house, she likes to chase stuffed mice and is very playful. She stays that way into old age. If they have been well socialized, they are people-oriented to the point of being affectionate and obtrusive. She enjoys stroking and cuddling extensively. Their uncomplicated nature makes them an ideal family cat. She also usually gets along well with other pets and even gets along with dogs when not threatened by them. Hamsters, mice, and other pets that they might see as prey if they also live in the household, must be housed in a very solid cage to be on the safe side so that they do not fall victim to the American Shorthair’s hunting instinct.

It is very adaptable and can also be kept purely as an apartment. But then she should have enough space to let off steam. Also, if you keep her in an apartment, you need to be extra careful that she doesn’t try to escape because the American Shorthair is extremely curious and if an opportunity arises to escape from the apartment or house, she will take it. It is nice for the lively American when another cat lives in the household with whom she can romp and cuddle. All in all, the even-tempered American Shorthair is an ideal cat for beginners.

The Appearance of the American Shorthair 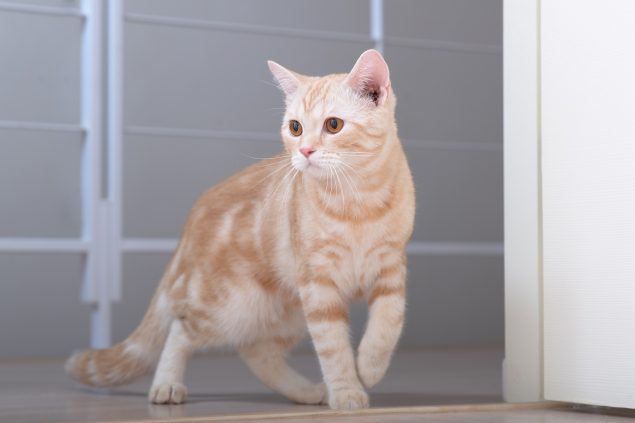 The American Shorthair is a medium-sized cat that can reach a shoulder height of 30 to 35 centimeters. Cats can weigh between 3 and 5 kilos, and tomcats between 4 and 7 kilos. Their head is quite broad with slanting, wide-set eyes. Their physique is stocky and muscular, betraying their hunting ancestors. But it is by no means clumsy, on the contrary. She is described as agile and athletic. The fur is short and dense. Most breed clubs allow all colors and all shades.

Thinking about bringing an American Shorthair kitten into your home? Then you will have to search a little because there are not many breeders in Germany yet. The best thing to do is to find out about a cat breeding club. If you buy a kitten, it is important that the breeder is affiliated with a breed club, as these clubs ensure that everything is done correctly in breeding and that you will have a healthy, well-socialized cat with which to live your cat for the next 15 to 20 years allowed to share life. American Shorthair can get very old, you should be aware of that. You will take responsibility for a living being for many years, but you will also have a lot of fun with it.