The Cane Corso Italiano, usually called Cane Corso for short and also known under the names Italian Mastiff, Italian Molosser, or Italian Corso, is notorious as a fighting dog like many of its relatives. But that does him an injustice. It is true that its ancestors were often misused as fighting dogs and the Cane Corso can also become a weapon if properly trained. But with good socialization and the right training, he becomes a real family dog ​​and even a child’s buddy.

History of the Cane Corso

The history of the Cane Corso can be traced back to ancient times. As early as 2,000 years before Christ, powerful dogs were depicted alongside warriors in pictorial representations. What is certain is that these Molossians were companions on war campaigns. What exactly the task was, however, is difficult to prove because there are no written testimonies about it. Whether they only guarded the camps and tents of their masters or took part in combat operations at their side could not be clarified with certainty. It is very likely that they served as messenger dogs, carrying messages from camp to camp. 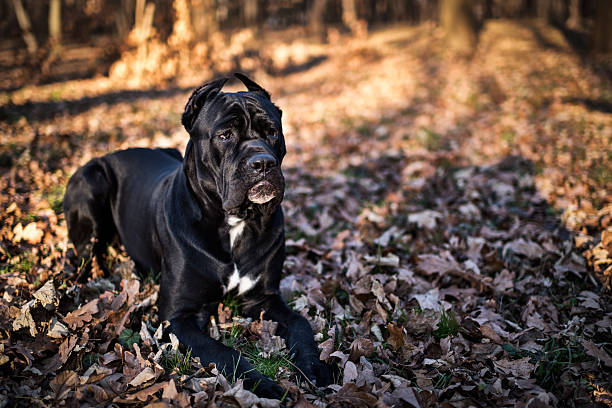 Almost 2,000 years later, these dogs were still in use. The Romans did not initially use them on their conquests, but they repeatedly encountered the strong, fearless dogs in the armies of their enemies. They soon became coveted spoils of war. In the Roman Empire, the Molosser were not only used in the military, but they also soon served as herding dogs for houses and farms and for the herds. They were also used in circus fights, as lions were expensive and fighting dogs were a cheap but impressive alternative.

The large, powerful dogs continued to be bred over the centuries. The Boxer, Great Danes, Mastiffs, Bulldogs, and St. Bernards are among their descendants. The Cane Corso is considered, along with the Neapolitan Mastiff, to be the most original of the Molosser species. In the south of Italy, especially in Apulia, he lived for centuries as a companion of man and took on the most diverse tasks.

He was the keeper of the flocks and looked after the house and yard. He also accompanied his people on the hunt and even proved himself with big game. It was forgotten in the small, isolated villages of Apulia and the neighboring provinces and was only rediscovered in the 1970s. The Cane Corso quickly became very popular. He is now known and loved beyond the borders of Italy. The breed was recognized by the FCI in 1996.

The origin of the part of the name “Corso” has not been clearly clarified. Some sources say that Corso derives from the Latin “cohors”, which means “keeper” and “bodyguard”. Others suspect a Celtic origin. In the language of the Celts, “Corso” means powerful. Cane Italiano, on the other hand, is easily explained. It simply means Italian dog.

A Cane Corso may appear menacing due to their size and muscular build, but they are anything but. Calm and even-tempered, with stoic composure and a high threshold, they are always friendly and affectionate with their humans and family. He also gets along well with children and loves to play. He even gets along well with the house cat if he has known her from puppyhood. But don’t confuse his calm demeanor with laziness. He cannot deny his past as a working dog. He is a very active dog who likes to do a lot, is intelligent, docile, and loyal to his people. Usually, he follows his instructions. However, he is also very self-confident and tends to dominate and if you do not appear confident and consistent, the Cane Corso will want to take over the regiment.

As a guard dog, he is very territorial and will defend his territory and his people, whom he loves more than anything, if necessary. He is very sensitive and senses exactly when a situation is really dangerous. Toward strangers, whether human or animal, they tend to be reserved or dismissive.

Purchase of a Cane Corso

The Cane Corso is on the list of potentially dangerous dogs, the so-called fighting dogs, in Bavaria and Brandenburg. And indeed, the calm, even-tempered Cane Corso can be dangerous if raised incorrectly simply because of its size and strength. Before you buy a Cane Corso, you should therefore inquire about the keeping regulations and requirements. In many communities, the dog tax for so-called fighting dogs is also higher. Here, too, you should ask so that you don’t experience a nasty surprise.