The Komondor is a very special dog. Its fur has an idiosyncratic structure and hangs down in thick strands. Many Komondors are so shaggy that you can only roughly guess their face. But the Hungarian herding dog also stands out from its peers in terms of character. Willfulness, self-confidence, and sovereignty combine to form a strong overall personality.

Contents hide
1 History of the Komondor
2 Essence and Character
3 Acquisition of a Komondor
4 Puppy Development and Education
5 How Do I Keep a Komondor?
5.1 Activities with the Komondor

History of the Komondor

The Komondor is a Hungarian Shepherd Dog, with differing theories as to its geographic and genetic origins. However, genetic analyzes now seem to show that the striking shags have not always existed, but that they can be traced back to a genetic defect. Although the Komondor is said to have existed as early as the 9th century, it wasn’t until a thousand years later that it developed its shaggy dress, previously its fur was smooth and rough.

In the course of genetic analysis, a relationship to the Hungarian Kuvasz was established. The assumed ancestry of Asian dog breeds was refuted in the same step. The Komondor has been recognized by the FCI (Fédération Cynologique Internationale) since 1954. Within Germany, breeding is carried out and planned by the Club for Hungarian Shepherd Dogs in accordance with the applicable breed regulations.

The Komondor has a strong protective instinct and is always alert. If a stranger invades its territory, it will immediately bark emphatically. However, he does not show this behavior towards his reference person and outside of his own home. Nevertheless, he is initially very reserved and neutral towards new acquaintances. Only the closest family members can enjoy his calm and trusting nature.

Acquisition of a Komondor

If you are seriously interested in a Komondor, you also need to know how to find a source. Since the Komondor is one of the rare breeds in this country, procurement can be complex and time-consuming. In the following section, you will find out what criteria you use to choose a suitable breeder and what else you need to consider when making a purchase.

The Komondor is a dog that has traditionally cooperated with humans to provide a helping hand in livestock protection. So he is quite docile and can be trained well. However, the Komondor also has a mind of its own. He only implements his owner’s command if it suits his own inner life.

Dog experience and sovereignty can therefore be an advantage in dog training. So that the former guard dog can live well within a family system, you should socialize it as a puppy. However, this training step is not a flaw of the Komondor but is an essential basis for the education of every dog.

How Do I Keep a Komondor?

The Komondor is a hardy, all-weather dog that does well in the outdoors. Changes in the weather, rain, and cold phases do not bother him at all. In some of our neighboring European countries, the Komondor is used as a livestock guardian and guard dog. At the same time, he is a great family dog ​​that can adapt to living in an apartment and everyday family life. 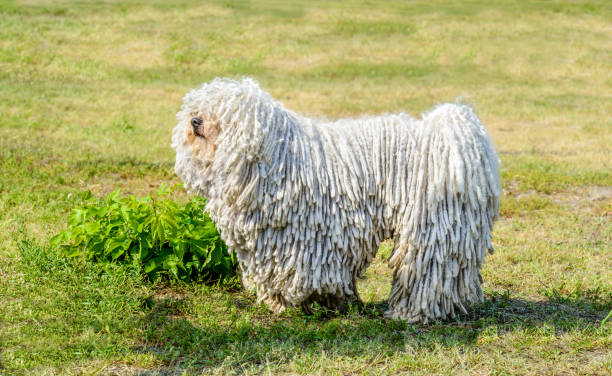 Once well integrated into the family, he accompanies them everywhere without attracting negative attention or disturbing them in any other way. In Germany, the Komondor is not listed as a dog, but in Switzerland it is. There one sees a potential danger in him, which is why the attitude is subject to strict conditions.

Activities with the Komondor

The Komondor is a frugal animal that does not need any additional activity apart from its protective role. If he has a large piece of land at his disposal, he looks for his own fields of activity. Nevertheless, he likes to go for walks with his family. When it comes to housing, the dog owner has to be a little more creative so that they don’t get bored.

Although the Komondor does not require any special entertainment, you should at least integrate him into family life by spending time together and allowing him to be close to you. The heavy curls restrict the Komondor in its mobility, which is why it is neither enthusiastic nor suitable for most dog sports unshorn. However, some individuals enjoy agility. Whether the dog is enthusiastic about sports is not only dependent on the breed, but also on the respective character type.