With an almost alien appearance, the Devon Rex may not be everyone’s prettiest feline, but it does have a charm of its own. All information about the origin, nature, and attitude of the cuddly cat breed can be found here in the profile.

History and Origin of the Devon Rex

The Devon Rex is a young cat breed that originated in the English county of Devonshire. A cat from the breeder Beryl Cox mated with a curly stray tomcat and the tomcat “Kirlee”, who was also curly, was born. At first, Cox thought this was the same lineage as the previously discovered Cornish Rex. However, the tomcat could not sire any curly offspring with a Cornish Rex. In addition, he differed significantly in appearance from the previous curly cats. His head was a lot broader, his cheeks prominent, and he had almost bat-like ears. “Kirlee” was successfully bred to Burmese cats and British Shorthair cats, thus establishing the Devon Rex. Breeders were soon exporting the breed abroad and in 1967 the British Governing Council Cat Federation (GCCF) recognized it.

The Devon Rex is a sociable and affectionate cat that is very attached to its people. She doesn’t like being alone and wants to be part of her owner’s life. This can go so far that they follow their two-legged friend at every turn through the apartment. However, you should not expect a good-natured and calm lap cat. As a rule, the cats are relaxed but can assert their strong will with a fiery temperament. The intelligent cats are extremely curious and explore the entire apartment. They also don’t stop at jumping on the table and nibbling on your food. The cats also meet strangers with courage and affection. One successful breeder of the breed described his charges as “a cross between a cat, a dog, and a monkey,” which pretty much sums up the Devon personality.

The Appearance of the Devon Rex

The Devon Rex is a slender and elegant cat with muscular and long legs. The tail is noticeably thin and the overall appearance rather goblin-like. The short, broad head with huge ears and prominent cheeks is particularly unique. The oval eyes are medium-sized and slanted. What is special about the breed is the curly or wavy coat. The hair is short and fine, with the coat consisting almost entirely of an undercoat and lying close to the body. In some representatives of the breed, the whiskers are also curled or shortened. 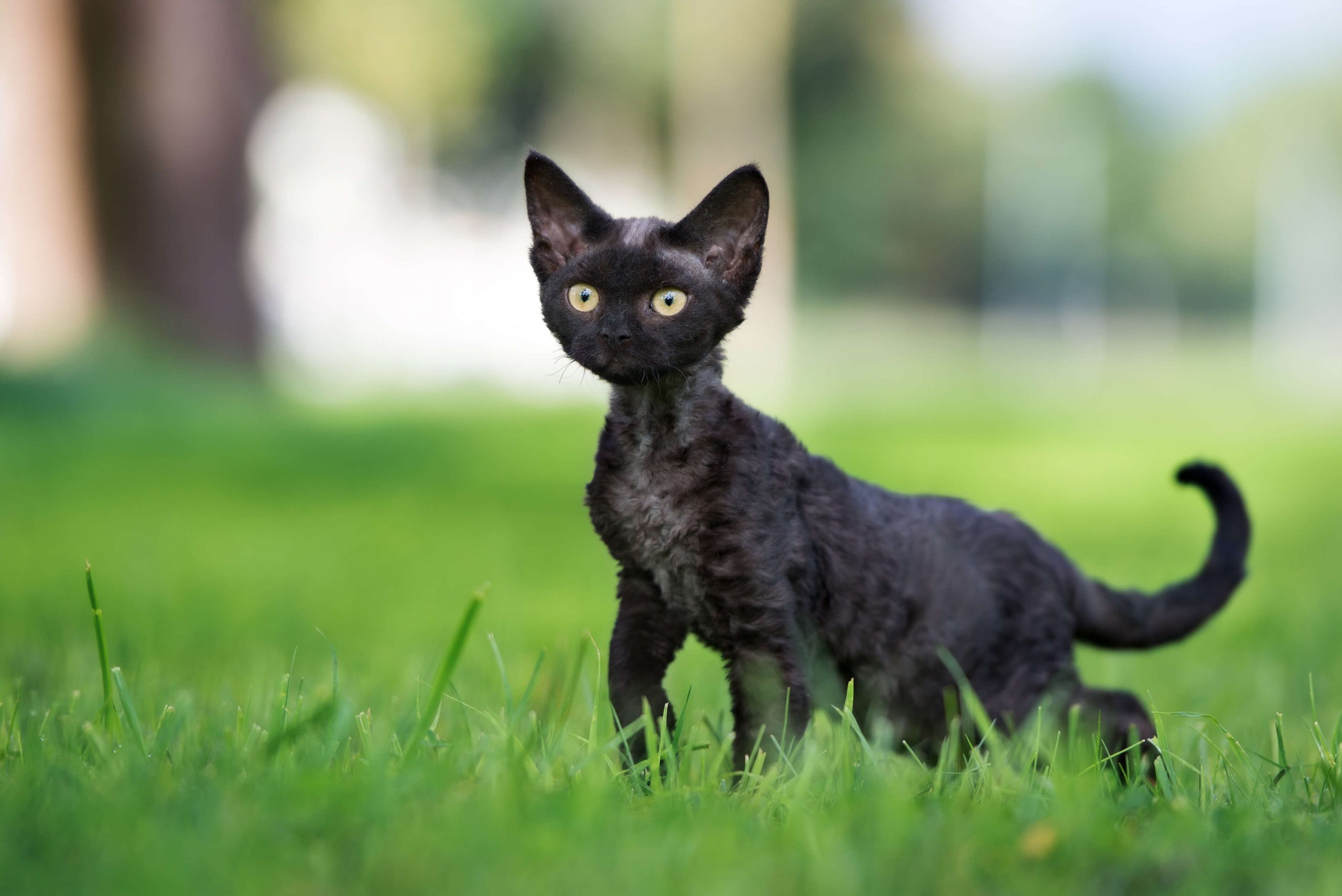 The Devon Rex is a good indoor cat as it prefers to be warm and cozy. She prefers to be near her bipeds anyway. When she explores the house, she likes to leave a bit of a mess. She likes a cozy place to lie down on the heater or on the sunny window sill. Especially in winter, she is not suitable for going outdoors because her thin hair cannot keep out the cold. Nevertheless, she needs enough space in the apartment to let off steam. A secured balcony or terrace would be ideal. Some members of the breed can also be used to walking on a leash.

How much exercise does the Devon Rex need?

Because it is a very intelligent breed, the Devon Rex is always looking for new challenges and activities. A large, sturdy scratching post and other cat toys are just what the active cat needs. She loves to play and is extremely teachable. You can teach her little tricks and tricks with ease. The communicative cat not only likes to deal with its owner but also seeks contact with other cats. Keeping multiple cats is almost a requirement for getting a Devon Rex.