If you’re looking for a playful and affectionate cat with a cheeky look, the Devon Rex could be just the right breed for you. Contrary to popular belief, however, she is by no means a cat for allergy sufferers: Although she loses less hair due to her coat structure, she is not free of allergens. With its large ears and curly fur, the Devon Rex is reminiscent of a bat. In fact, this special pedigree cat owes its existence to a random coat mutation and the commitment of an ambitious cat lover.

With its friendly and people-oriented nature, the Devon Rex is perfect for anyone who wants a companionable pet. The affectionate cats follow their owners wherever they go. Because the Devon Rex is very intelligent, it constantly needs new challenges to keep it from getting bored. She likes to play and is also extremely teachable. The clever animals usually learn little tricks quickly.

Devon Rex cats are ideal for living in apartments, especially since their unusual coat does not protect well against cold, wet, and sunburn. The cats are very playful and love to move. So they need space to run around. Devon Rex loves people and doesn’t tolerate being alone for long periods of time. They get along very well with other cats, so you should give your Devon Rex a playmate. With their idiosyncratic charm, they will soon be in charge of the household and will win the heart of every cat lover in no time. 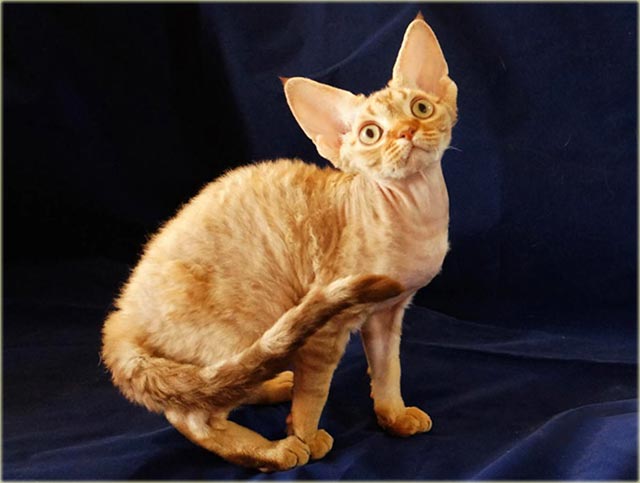 The Devon Rex’s short coat needs regular grooming. It is best to use only very soft brushes to avoid combing out the fine hair unnecessarily. The large ears require special attention, which you should carefully clean regularly with cotton wool. The energy requirements of a Devon Rex are slightly higher than those of other cats. That’s because their fur doesn’t warm up as well. So the Devon Rex needs a suitable feed. However, you have to make sure that the cat doesn’t get too chubby. Also, check your house cat’s teeth regularly: Devon Rex cats tend to get gum infections.

Colors of the Devon Rex

The Devon Rex cat’s curly coat is short and dense and has little guard hair. The breed standard recognizes any color and highlighting of the coat, as well as all eye colors. Hairless parts of the body are undesirable.

The History of the Devon Rex

But how did the “goblin cat” come about? In 1960, Miss Beryl Cox, of Devonshire, England, was accidentally gifted a litter of kittens whose father had curly fur. Among the kittens was a curly-haired tomcat named Karlee. Miss Cox had previously become aware of cats with frizzy fur combined: The unusual coat structure is hereditary and can be worked out through breeding. This was the beginning of targeted matings that produced an oriental-looking, medium build, slightly bow-legged cat. The breed was officially recognized as early as 1967. Since then, the goblin-like kitten with big ears has been a star at exhibitions time and time again. Breeding began in Germany in 1970.

It is also remarkable that the breed name “Rex” goes back to a rabbit. In 1870, the Belgian King Leopold II tried to register a curly animal at an exhibition. Unable to refuse the monarch, exhibitors improvised and elevated the animal to the breed status of Rex rabbit, which in turn inspired cat lovers.

Peculiarities of the Devon Rex

The Devon Rex is considered to be particularly stress-resistant. She confidently demonstrates her strong nerves at exhibitions. She is also said to have good intuition, with which she encounters strangers and unfamiliar situations.

Finally, it should be noted: This breed is discussed as torture breeding since curled whiskers (crippled organs) can occur with them.

Important note on the breeding form

Curly-haired cats do not have functional vibrissae on their head or body (they are usually curly as well). Since vibrissae are an essential sensory organ for cats, their absence or their transformation leading to a lack of function is to be considered a tormented breeding trait. 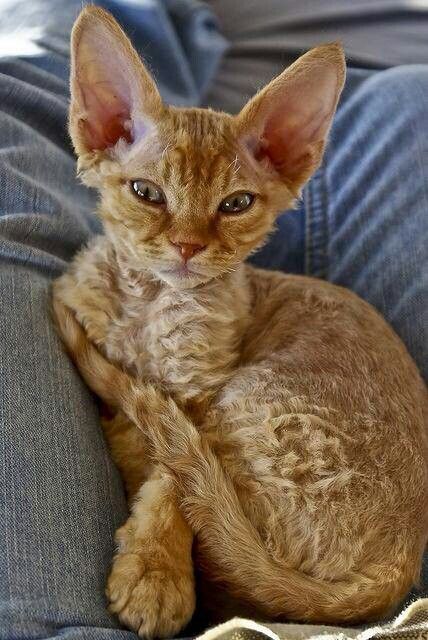 The whiskers are important for orientation, especially in the dark, but also when catching and scanning prey, examining objects, and establishing social contacts. The BMELV report recommends a breeding ban for cats without curly whiskers.