Although this cross is not yet very popular, it can become a very affectionate and active dog.

However, there are many things to consider before purchasing a Bernese Mountain Dog Golden Retriever puppy. 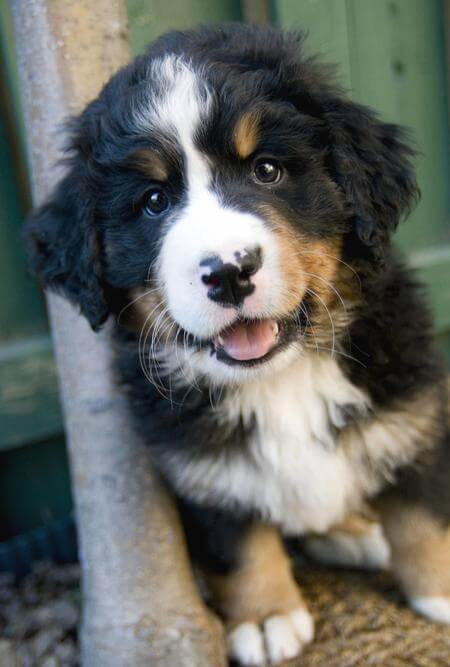 Since the Bernese Golden Retriever mix is ​​a mix of two purebred breeds, it is known as a “designer dog”.

Designer dogs have been put to the test in recent years. Many dedicated purebred fans claim that mixed breeds may be less healthy than purebred dogs and that many designer dogs are bred by them just for the money, without worrying about the welfare of the litters.

Origins of the Bernese Mountain Dog 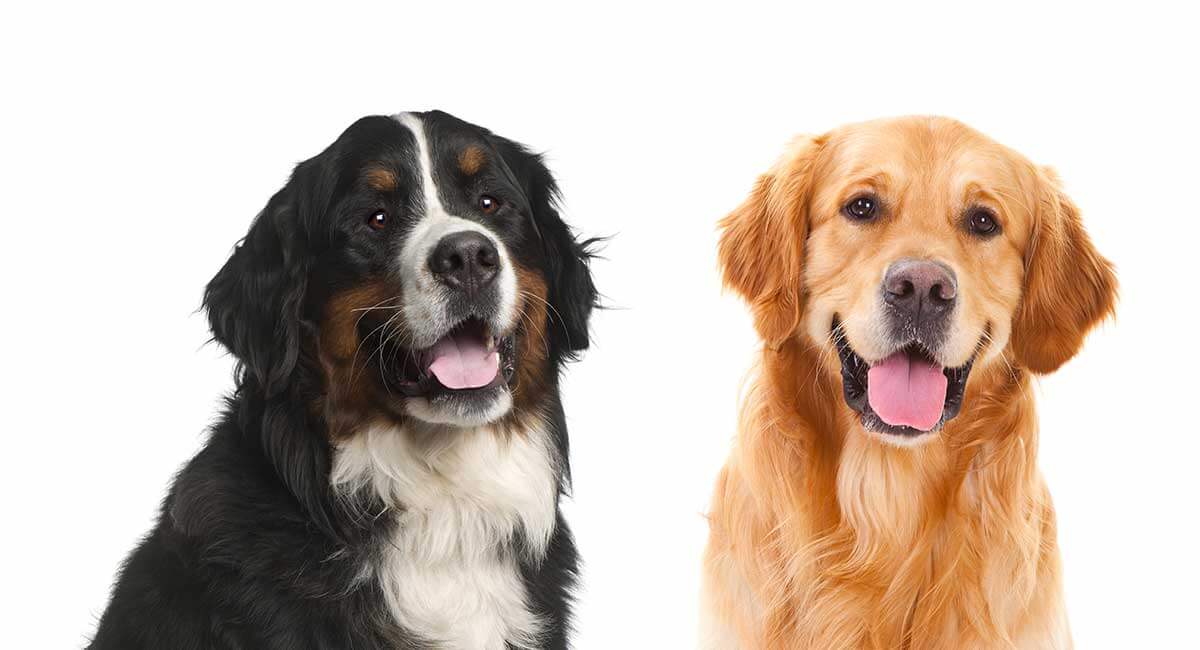 The Bernese Mountain Dog comes from Switzerland, more precisely from a region known as Bern, hence its name.

The Bernese Mountain Dog worked alongside other mountain breeds on farms by driving cattle and protecting the population from predators.

The breed reached America in 1926 when a Kansas farmer imported a pair as farm dogs.

From then on, they started and quickly became a popular farm dog and family pet.

Origins of the Golden Retriever 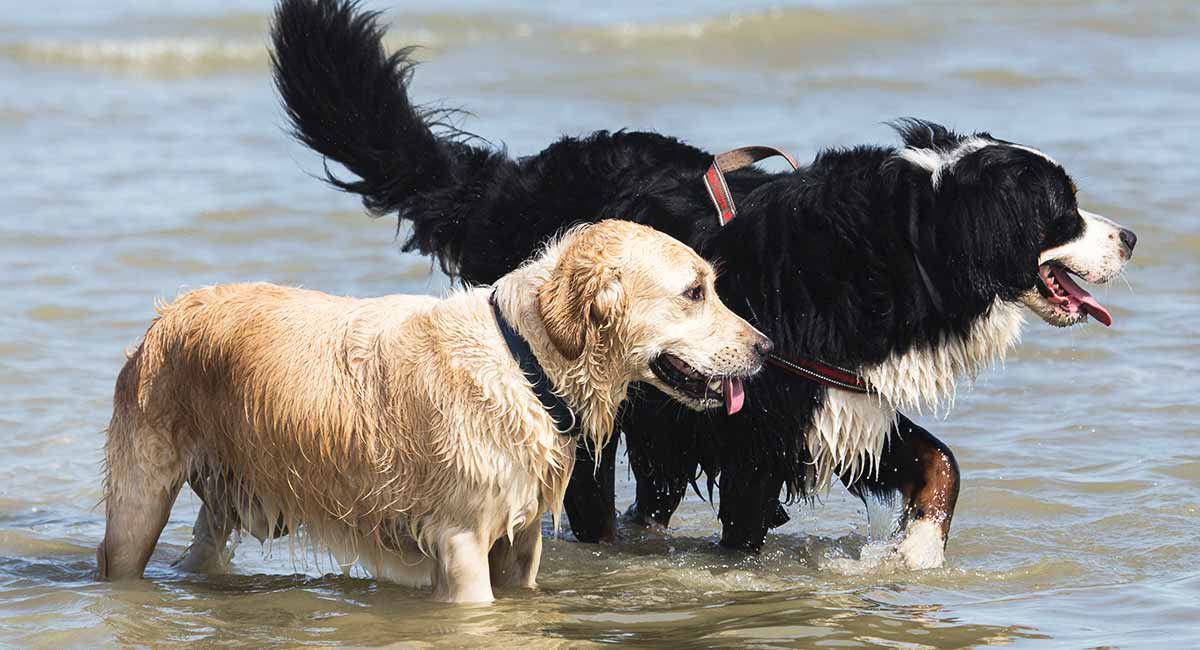 The Golden Retriever was first bred by a man named Dudley Marjoribanks in the Scottish Highlands.

He tried to breed an ideal hunting dog for his country, appropriate to both the rainy weather and the rough terrain.

After all, he bred the golden retriever we know and love today.

The breed was first seen at a dog show in Britain in 1908 and was quickly loved by the local population for its usefulness and friendly, obedient nature. 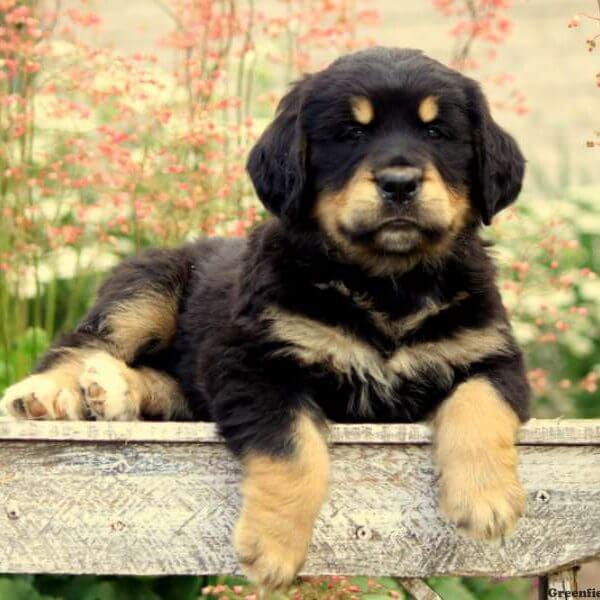 The Bernese Mountain Dog Retriever Mix is ​​a current up and coming cross with an unclear origin.

Bernese Golden Retriever puppies can consist of a single parent or a combination of both such as temperament, size, and coat.

Therefore, it is important to know about both parent breeds in order to have a better idea of ​​what to expect.

Size, height, and weight of the Golden Berner 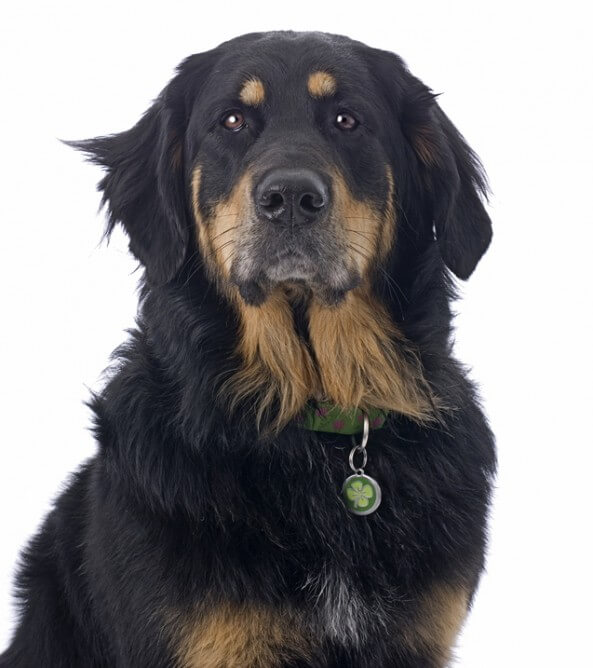 Both the Bernese Mountain Dog and the Golden Retriever are fairly large breeds.

On the other hand, the average height of the Golden Retriever is around 23 to 24 inches for males and 22 to 23 inches for females.

Because of this, you can rest assured that the cross is a large dog, anywhere from 22 to 28 cm.

However, the parent breeds show a significant difference in weight.

The golden retriever is a much lighter dog, striking between 65 and 75 pounds in men and between 55 and 65 pounds in women.

Because of this difference, depending on which parent takes over the Golden Retriever in Bern, you may get a much heavier dog. 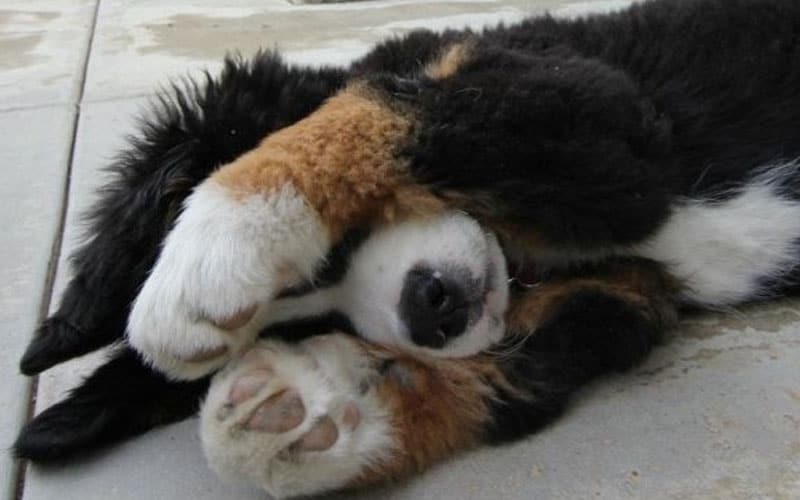 The Bernese Mountain Dog is a large, stocky dog ​​with a long, wavy coat.

Their fur is three-colored: jet black, white and rusty.

They have distinctive markings on the face that show their dignified nature and the floppy ears that are placed high on the head.

The muzzle is straight and they have gentle, intelligent eyes.

The golden retriever has a powerful, athletic body.

Her distinctive golden coat consists of two layers: a dense, waterproof coat and a soft undercoat.

Their fur can be straight or wavy.

An intelligent look from dark brown eyes and a strong, defined muzzle form the face of the retriever.

They have short, droopy ears.

Which Bernese Mountain Dog-Retriever mix is ​​likely to give pups of this crossbreed the defined, straight muzzle and intelligent look that are known to both breeds.

Their ears will be floppy, and they can end with a wavy or straight coat.

As for the color and markings on the fur, the Bernese Mountain Dog and Golden Retriever mix can look like either parent.

You could acquire the gold coat or the black of the Bernese.

It is difficult to predict what markings might be present in Golden Berner puppies.

They could have the unique color samples known to the Bernese, just parts of them, or they could only have a single layer of paint.

The Bernese Mountain Dog is considered a calm, friendly and loving dog.

However, they tend to be aloof and suspicious of strangers.

The Golden Retriever is also a friendly and loyal dog that fits very well into a family.

They are intelligent and sociable, and quite a playful and energetic breed.

A Bernese and Golden Retriever mix will likely show these positive traits when properly raised and trained, as both parent breeds share similar personalities and temperaments. 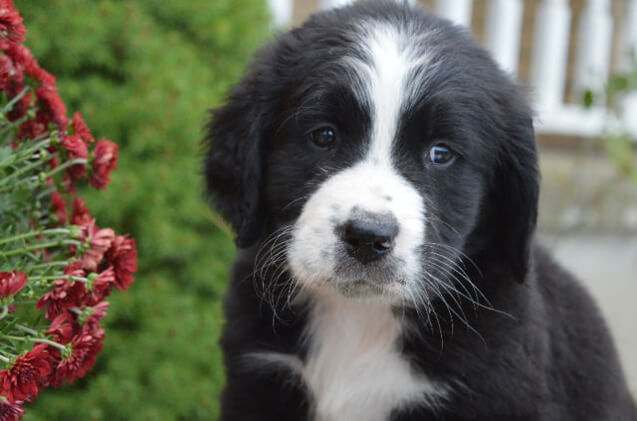 Mountain Golden Retrievers should be fed good quality dog ​​food, but be careful not to overfeed them..

Obesity can be a real problem. So give out treats in moderation and pay attention to the dog’s diet.

Both parent breeds shed heavily throughout the year.

A Bernese Mountain Dog Retriever Mix puppy will be no different.

Therefore it has to be brushed regularly.

Usually two or three times a week should be enough, although as the season wears off, you will need to brush daily to remove the dead hair.

We also recommend that you keep an eye on your dog’s nails and clip them if they get too long.

Dental health is just as important. Regular brushing is recommended. 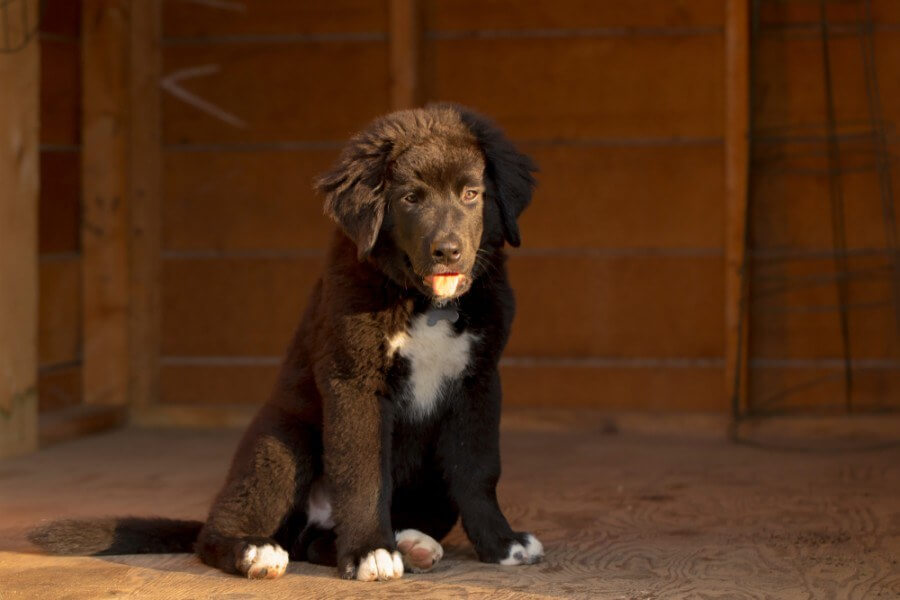 Unfortunately, both parent breeds are at risk for various health problems that could potentially be passed on to the Golden Retriever Bernese Mountain Dog puppies.

Hence, it is important to be aware of the health issues that both races experience within the cross.

The Bernese Mountain Dog is predisposed to developing epilepsy, according to a 2008 study.

The results indicated that there was a genetic basis for the disease, which means it could potentially be passed on.

You are also at risk of von Willebrand syndrome, an inherited bleeding disorder in which blood does not clot properly, resulting in severe bleeding from a minor wound.

Skin diseases such as bacterial folliculitis, furunculosis, and atopy have prevailed in Golden Retrievers, according to a study by>.

It is possible that a Bernese Mountain Dog Retriever puppy could suffer from these conditions as well if it comes after the Retriever parent.

One condition that is prevalent in both breeds is dysplasia of the hip and elbow.

This is where the joints of the hip or elbow don’t develop properly as your puppy grows, resulting in painful arthritis.

Unfortunately, both parent breeds are also predisposed to developing various types of cancer.

A study carried out in 2013 “showed that in the study group Bernese Mountain Dogs died of cancer-related causes.>

For Golden Retrievers, that number was 38.8%.

Because these conditions affect both breeds, a Bernese mountain and golden retriever mix are ​​at increased risk of developing cancer and dysplasia.

Hence, it is very important to be aware of this before purchasing Bernese Mountain Golden Retriever puppies.

Making sure these conditions haven’t affected the parent dogs through medical history and assessments can reduce the chances of them occurring in a puppy. 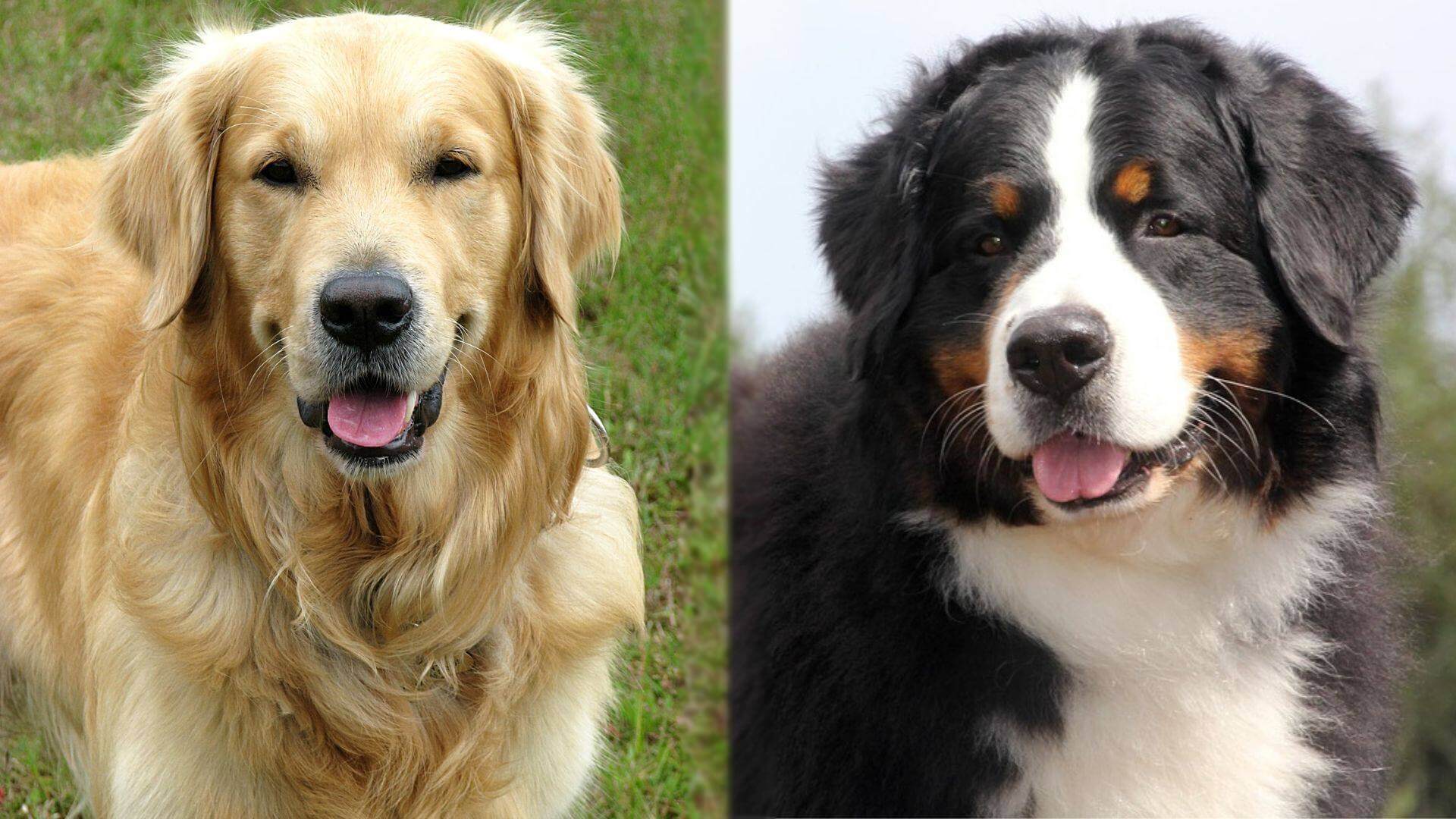 Both the Bernese Mountain Dog and the Golden Retriever are very energetic dogs that need plenty of exercises every day to be happy.

Therefore, a Bernese Mountain Dog Retriever mix will most likely also require a lot of exercises.

A long daily walk with some options to pick up the pace, such as jogging or picking up, is perfect.

Both parent breeds are also very easy to train, so there will likely be the Golden Mountain Cross as well.

They will go well with the patient, reward-based training.

We also recommend that your puppy take part in socialization training from a young age.

This can help prevent unwanted traits from forming. 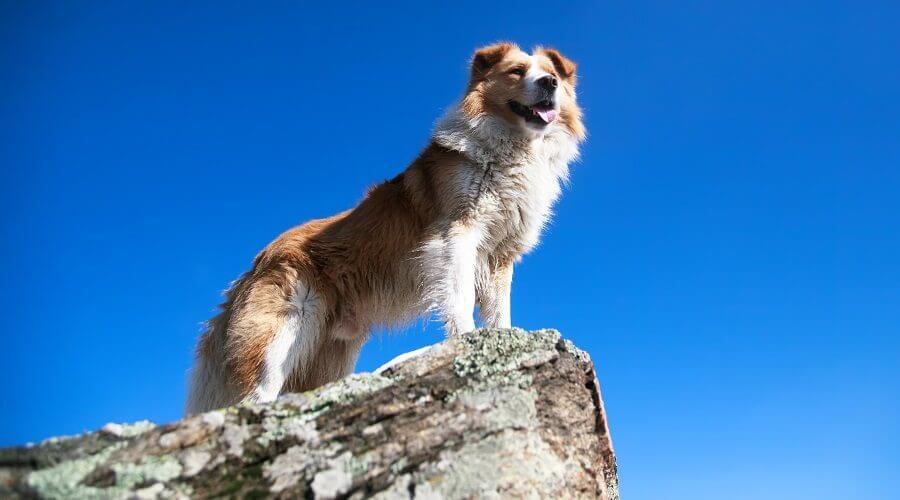 The mix from the Golden Retriever Bernese Mountain is very energetic and requires a lot of exercises every day.

A house with a safe, large yard can be a great place to run around and play.

Their friendly and sprinkled temperament makes a great family dog, provided they have been well trained and trained accordingly.

They prove to be gentle with children and do well with other pets in the household.

You must have been properly socialized again.

The cross is quite maintenance-intensive both when exercising and when cleaning.

Potential owners need to be confident that they can take the time to look after them properly.

It is possible that this breed may suffer from separation anxiety, especially if they haven’t been trained at a young age.

Hence, the Bernese x Golden Retriever thrives in a home where someone is usually around to accompany them. 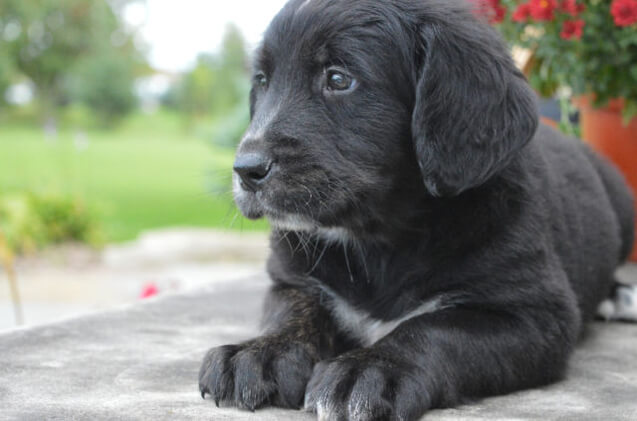 When deciding to buy a mixed Bernese Mountain Dog puppy, there are several things you need to consider.

Since this cross is not very popular right now, it can be difficult to find a breeder.