In many forums, owners of the breed report that their dogs are “addicted to eating”. Nothing is safe from them, paper handkerchiefs, cardboard, cigarette butts, or even entire packages end up in the dogs’ stomachs.

Others complain that their dogs snap and bite, or even eat furniture and carpets. In all cases, you should seek professional help and not “try around” on the dog yourself. Going to a good dog school or a dog trainer is a good investment. 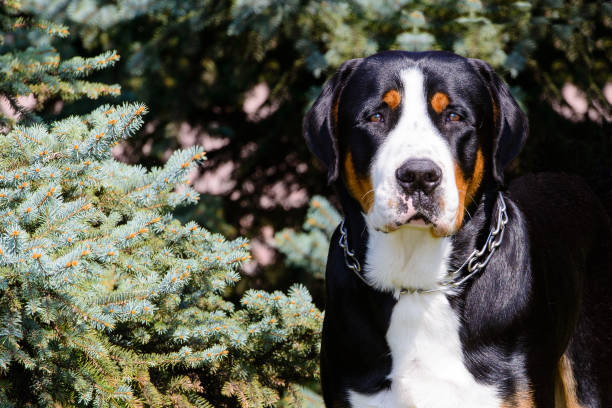 The greatest of the great. A Greater Swiss Mountain Dog ideally has a shoulder height of 60 to 72 centimeters. With 45 to a good 60 kilograms, a Greater Swiss Mountain Dog shows the highest weight of the representatives of the classic domestic and farm dogs from the Alpine Republic. It is followed by the slightly smaller Bernese Mountain Dog, the Appenzeller, and the smallest mountain dog, the Entlebucher. Adult bitches of the large breed remain recognizable in their proportions below those of males.

After the founding of the Club for Greater Swiss Mountain Dogs in 1912, it was still 27 years before the first FCI standard was introduced. This is documented under the standard number 58. A three-color representative of the breed is currently described in it.

Its basic color is black. The red-brown branding and white markings on the head, paws, and chest complement the expressive appearance. A massive skull with triangular ears completes it. The maintenance effort for the coat can be classified as low. The short stick hair with its awns and dense undercoat are easy to care for. Brushing once in a while is enough to keep it in pristine condition. The fur does not get dirty by nature, only dead hair needs to be removed.

The ancestors of the mountain dogs, the butcher and butcher dogs, used to pull the carts of the lords in their homeland. In the 18th and 19th centuries, Swiss farmers, butchers, and traders used dogs for their purposes. The calm but not sluggish animals are reliable and not moody. With their impressive appearance, they possess the authority per se to assert themselves as herd protectors and court guardians.

Her bared teeth are enough expression to keep potential troublemakers at bay. Swiss Mountain Dogs don’t need to constantly bark, which is an advantage when living with people in today’s more densely populated residential areas.

However, the following applies: every dog ​​is an individual, all dogs grow up uniquely and develop their own characteristics. So it is understandable that the Greater Swiss Mountain Dog is described as a quiet representative who hardly ever barks. At the same time, dog owners report that their companions of the same breed comment on every slamming car door or the tomcat’s springy gait on the neighboring property.

A lot depends on how solid the basic education was. Whether constant further training takes place and, above all, whether the medium urge to move of the large dog is met. Long walks, for example, are a good way to do justice to it. Sometimes the strong four-legged friends can be observed in train training, harnessed to a cart or sled.

Except for a certain stubbornness, the imposing mountain dog shows no demands that could not be mastered by beginners. Adaptable, affectionate, and empathetic when being together with children is the everyday human-animal life without big corners and edges. Small livestock and poultry are in good hands with the Swiss. Always assuming he is cleverly socialized and knows his surroundings from an early age. 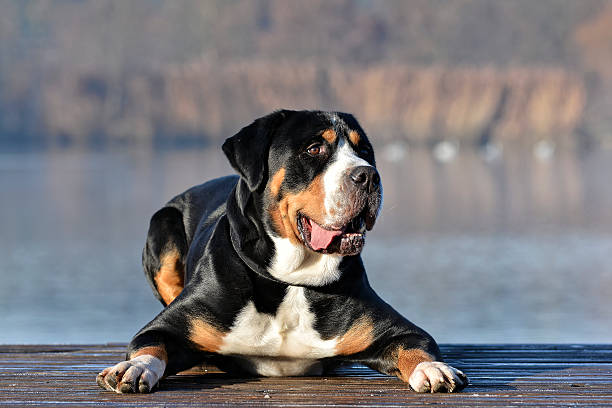 Also, he’s not a hunter. This means less stress in the great outdoors, even if not all other dog owners and their darlings immediately encounter such a large dog without prejudice. The Greater Swiss Mountain Dog’s keen sense of danger enables the four-legged friend to act with foresight.

This benefits the animals entrusted to them as well as the bipeds who rely on him. A self-confident appearance towards strangers can be observed, without a trace of nervousness or hecticness. The cattle dealers and butchers of bygone days have replaced the family of the Swiss today and now and then a shepherd who pursues his profession in a traditional way.

For a purely urban attitude, there are dog breeds that are better adapted to such a way of life. A generous territory, a life in the fresh air, and a daily business with tasks are the preferences that have been preserved in the shepherd dog.

He wants to be needed all day long. In the family, as a guard dog, as a reliable companion. On the way, the Swiss Army required him to be used as a draft and transport dog for a while. In his country of origin, a relatively small number of puppies of this breed has been documented recently. According to the VDH, the member clubs in Germany reported the birth of 303 puppies in 2017.

The Greater Swiss Mountain Dog is a robust, strong dog with a calm, even-tempered nature and a good protective instinct, without being overly aggressive. He needs space, close family connections, and is patient with children. He likes to be in the yard and garden without straying.