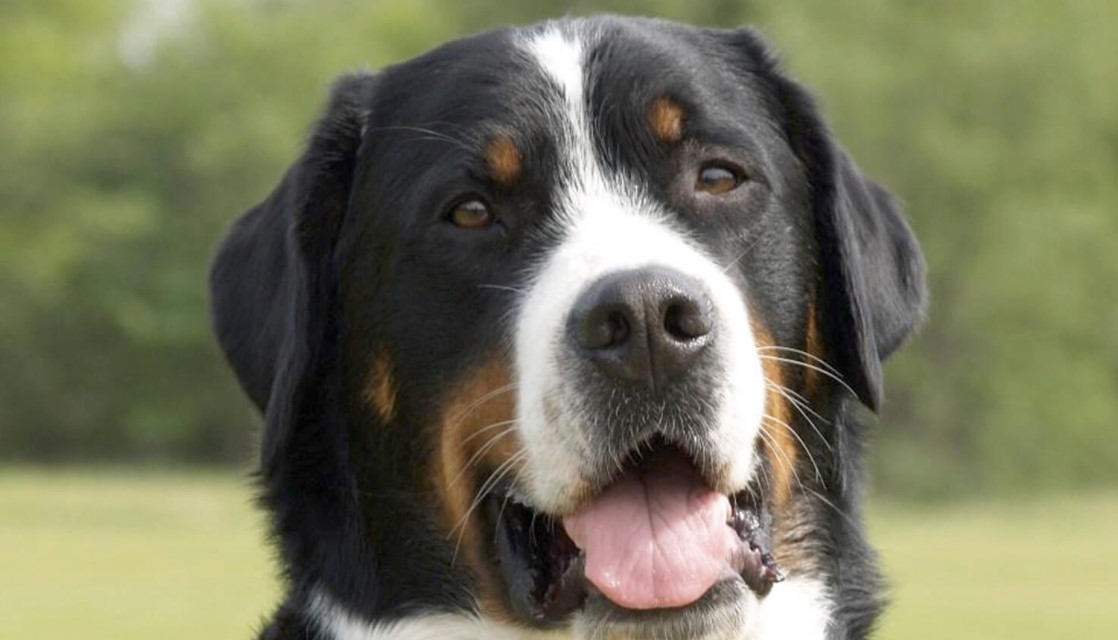 The ancestors of the Greater Swiss Mountain Dog were molossoid dogs of the Romans. The dogs were threatened with extinction when they were (re)discovered in 1908 at a jubilee exhibition by Prof. A.Heim, the great patron of Swiss mountain dogs. From then on he dedicated himself to the preservation of the breed. The breed was officially recognized in 1909, and the “Club for Large Swiss Mountain Dogs” was founded in 1912, but it was not until 1939 that the FCI published the first standard.

The appearance of the Greater Swiss Mountain Dog

According to the breed standard, the Greater Swiss Mountain Dog is a tricolor, stocky, strong-boned, and well-muscled dog. Despite its size and weight, it is extremely agile. The coat is black with large reddish-brown spots and white markings.

The black base color covers the body, neck, head and tail of the dog like a coat. The white blaze on the forehead widens towards the muzzle. The red-brown spots can be found on the cheeks, the legs and on the sides of the chest area of ​​the Greater Swiss Mountain Dog.

The red-brown spots above the eyes, which are typical of the Greater Swiss Mountain Dog, are referred to as “four eyes” or “double eyes”.

The difference to other Swiss Mountain Dogs

In total there are these four different Swiss Mountain Dogs (sorted by size, starting with the smallest breed):

As a classic house and farm dog, the Greater Swiss Mountain Dog guards its home attentively and reliably. He is not only a loyal protector but also a loving playmate for children. He loves his people unconditionally and prefers to be near them.

This well-balanced dog is not easily disturbed by strangers or other barking dogs. He is aware of his imposing appearance and has a calm disposition. His disposition is calm and good-natured, yet very alert and alert, but never nervous.

Fearful or aggressive behavior is very uncharacteristic of the Greater Swiss Mountain Dog.

Hours of jogging is not right for the Greater Swiss Mountain Dog – it’s not what it’s built for. However, his job is time-consuming. These dogs are considered to be very persistent and willing to work. You absolutely need a full-time job and love to be challenged.

A farm or horse stud farm is ideal for this breed, where the dog can move freely and independently pursue its job as a guard. This is where the Greater Swiss Mountain Dog really thrives. For him, just being able to walk for an hour a day is not enough. This dog is best allowed to let off steam pulling a sled in winter, or pulling smaller children in a handcart.

If you cannot offer a large plot of land, you can use this dog in other ways. He willingly carries his owners’ purchases home. But only if they are not too heavy and he is equipped with a dog backpack.

The Greater Swiss Mountain Dog is very docile and quickly learns what is expected of it. But he doesn’t just want to enjoy a basic education, he also wants to be kept busy with new challenges. Any kind of work is popular, for example pulling a sleigh in winter.

These dogs are in dire need of a job. If something seems pointless to them, they can show their stubborn side. Only those who know how to use the Greater Swiss Mountain Dog in a species-appropriate way will experience it as the adaptable and uncomplicated dog it is.

The big dog needs a lot of space. A large plot of lands, such as a farm or a stud farm, on which he can move freely is ideal for him. Keeping this breed indoors is not recommended.

A large yard is also ideal for this breed. However, this alone is not enough to exercise a Greater Swiss Mountain Dog in a species-appropriate manner. Remember that this dog always needs a task and plenty of exercises.

The breed is very adaptable and can be happy in the city with the right workload. However, the Greater Swiss Mountain Dog is better suited to country life. This dog usually gets along very well with other pets.

Thanks to short stick hair, this dog’s coat is very easy to care for. It is perfectly sufficient to care for it with a special brush from time to time.

As with any dog, what nutrients they really need will depend on their age, gender, and health condition. Let your veterinarian advise you on the ideal feeding for your Greater Swiss Mountain Dog.

In any case, you should offer the large dog smaller portions several times a day. Because this breed has a pronounced appetite and tends to be overweight, which you can prevent in this way. In addition, with smaller portions you avoid a dangerous torsion of the stomach.

Since the breed is prone to joint problems, puppies in particular should not consume too much protein during the growth phase, otherwise, they will grow too quickly. This in turn puts a strain on the skeleton. In order to avoid joint problems in adulthood, Greater Swiss Mountain Dog puppies up to the age of 18 months should be given food that is low in protein.

Because he loves to eat, the Greater Swiss Mountain Dog can quickly become overweight. Back and hip problems are the result, and there is also a tendency to twist the stomach. Epilepsy can also occur in this breed.

Like all large and heavy dog breeds, the Greater Swiss Mountain Dog often suffers from joint problems such as hip dysplasia (HD), elbow dysplasia (ED) or osteochondritis dissecans (OCD). It is important to make sure when purchasing that the puppies come from a reputable breeder in order to rule out hereditary diseases as best as possible.

Expect to pay around $1,300 to $2,000 for a Greater Swiss Mountain Dog puppy from such a breeder. This is a large sum, but it is absolutely justified. After all, the puppy has been professionally raised, has papers, and has undergone a health check. 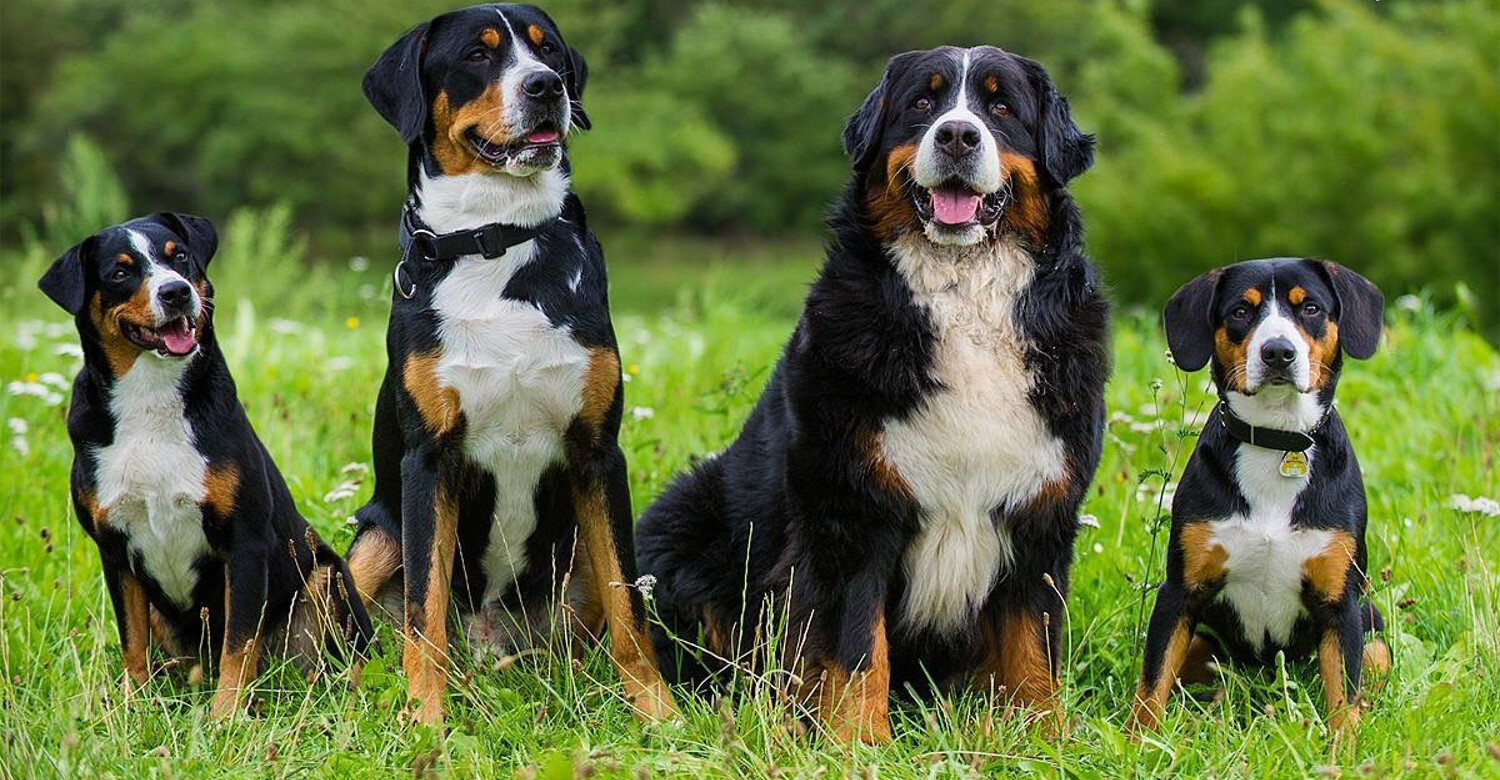 The Greater Swiss Mountain Dog is a rather rare breed. Around 500 of these animals are said to live in Switzerland. Only about 120 puppies (registered) are born each year.