Rat babies that cannot be raised by their mother must be bottle-fed.

Rats are usually very good and reliable mothers. If the female does not accept her offspring (e.g. because she is still young and inexperienced) or if she dies, the man has to intervene. With a mother animal that does not accept her offspring, you can try to “force” her into her role as a mother. This works by bringing mother and young together in a small space (e.g. a bowl). In the absence of an escape route, the female usually lets her babies suckle and from then on raises them independently. However, you must be careful that the rat does not feel too much pressure and even kills the young!

The second way to avoid difficult hand-rearing is nurse-rearing. Here you push the babies under another nursing female rat. However, the mother’s own young should not be more than three days older than the orphaned babies. If the orphans are at least ten days old, the wet nurse’s young animals may be a maximum of one week older. When they are brought together, the mother is separated from her young for a short time. The alien hatchlings are rubbed down with the nesting material and mixed with the other litter. Then the female has added again.

Whip up with the bottle 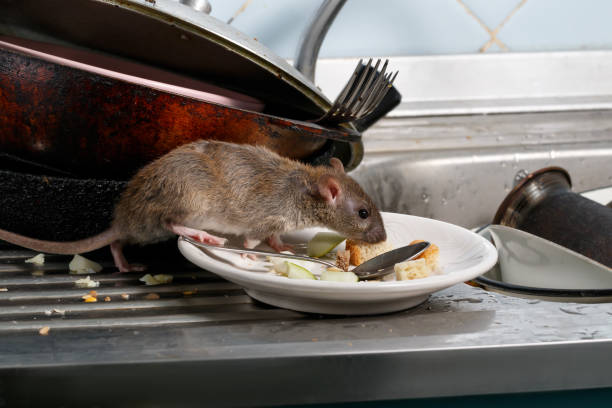 If you only have the option of hand-rearing the babies, it will take some effort. The young need a nest that keeps them warm at a constant 35°C. An adjustable heating pad placed under a plastic can, for example, is suitable for supplying heat. The plastic box can be lined with paper towels and covered with a towel. Always make sure that the ambient temperature is neither too high nor too low! As a milk substitute, use powdered cat rearing milk, which you add 2-2.5 ml of an infusion solution (e.g. “Amynin” by Merial, available from the veterinarian) and a drop-sized amount of “Bird Bene-Bac” (bacterial culture to prevent digestive problems) per half tablespoon ) to mix.

The rat babies are fed about every hour for the first seven days using a 1 ml disposable syringe (without a needle). Initially, the animals take in drop-sized amounts, from 7 days onwards about 0.5 ml per meal. To feed, lay the young on their backs and gently hold them between your thumb, index, and middle fingers. So that the rats can defecate and urinate, their abdomen and urogenital region must be carefully massaged after each meal. From the second week of life, you can add some Milupa multigrain porridge (without cow’s milk) to the substitute milk. At the age of 28 days, rats are already eating half of their solid food and can gradually be weaned off the milk substitute.