Mantrailing, also known as tracking or track work, is great fun for many dogs. No wonder: Here they can put their powerful noses to the test. Read here how to start with mantrailing and whether this sport is suitable for your dog.

With the dog sport “Mantrailing” you can go in search of tracks together with your dog. The dog is supposed to find hidden people with its nose alone. And that works in any weather and at any time of the year, whether outdoors in nature or indoors.

Mantrailing suits your dog’s natural nature very well. Dogs have very sensitive noses and love to sniff. Here you can find out how your dog can become a mantrailer and what you need for this dog sport. 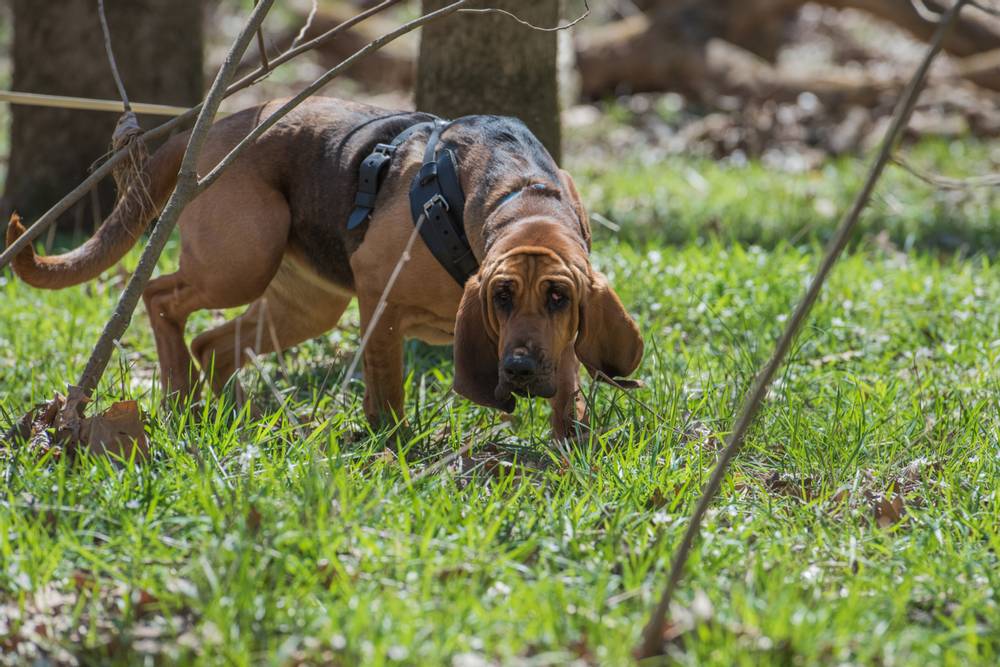 This dog sport originally comes from the USA and therefore has an English name. It consists of “Man” (human being) and “Trailing” (follow track) together. The dog is trained to track down a person in the field.

Some dogs are trained to become professional mantrailers, which are used by the police or the rescue dog squadron, for example. Training to become a tracking dog takes two to three years.

But you can also practice mantrailing as a casual hobby with your dog. Your dog will learn to work independently and with focus. If you want to teach your dog to mantrail, you first need the right equipment.

This is what you need for mantrailing

If you want to go tracking with your dog, you need the right mantrailing equipment. This includes:

The special tracking gear should only be used for mantrailing. Put it on your dog before work and take it off afterwards. This creates a ritual for your dog and he will understand when the work begins.

A tracking line with a hand loop* is suitable for mantrailing. It should be five to ten meters long and made of leather, biothane or nylon. Think of a windproof and waterproof jacket* when it’s wet and cold outside. Your dog must not freeze either. Equip him with a quality dog ​​coat* when it’s too cold for him.

For mantrailing you also need a qualified tracklayer who has the knowledge about this dog sport. It is advisable to train in a suitable club where you can exchange ideas with other mantrailers. If you have a large area available for tracking work, you can start.

Procedure for mantrailing with a dog

The work begins by putting the tracking harness on your dog. After the track has been laid, the dog is allowed to smell a sample of the person. This can be a t-shirt, a sock, or anything else that the person has touched before.

Then the dog is brought to the beginning of the track, the so-called approach. With the command “Search” the dog can start to sniff. When one is sure that he has picked up the scent, the leash is released until it has reached its full length.

It is important that you always observe your dog when mantrailing and interpret his body language correctly. If he reaches an object that belongs to the person he is looking for, he shows it. The dog does this by making room, sitting down or barking. The dog is then put back on the track again. When the person has finally been found, the dog is praised extensively and the tracking harness is immediately removed again. The dog understands that he has successfully completed his work.

Mantrailing: How to teach your dog

Your dog can also learn to use its nose to detect people. It is best to get into mantrailing in a playful way. Proceed step by step:

Repeat these steps until your dog is clearly only searching with his nose. If you want to start mantrailing properly, you should now seek expert help to properly train yourself and your dog.

Mantrailing training in the club

Even if you don’t want to practice mantrailing professionally, but “only” as a hobby, you should look for an expert. In a club, you and your dog can be ideally supported. This is what training looks like for you and your dog.

Mantrailing beginners start with so-called basic trails. The dog looks for about three scent samples and the person it is looking for over a short distance of no more than 15 metres. As your dog improves, the search area is slowly expanded and the scent samples reduced.

The dog can indicate in different ways that it has found something. He can sit down, make room, lie down or jump at the person he finds. However, the latter is only okay for hobby mantrailing. Finally, professional search dogs also come across people who are afraid of dogs or who are injured.

The level of difficulty can only be increased slowly once the human and dog have internalized mantrailing. This is the case when the dog only searches with its nose, has already found the person in different situations and its owner knows how to use the long leash.

Difficulty can be increased in mantrailing by having to follow old tracks that are up to 24 hours old. Areas that offer many other smells that might confuse the dog also make mantrailing difficult.

Important: After difficult trails it is important to return to easier ones. So you and your dog keep the pleasure of mantrailing.

These dogs are good for mantrailing 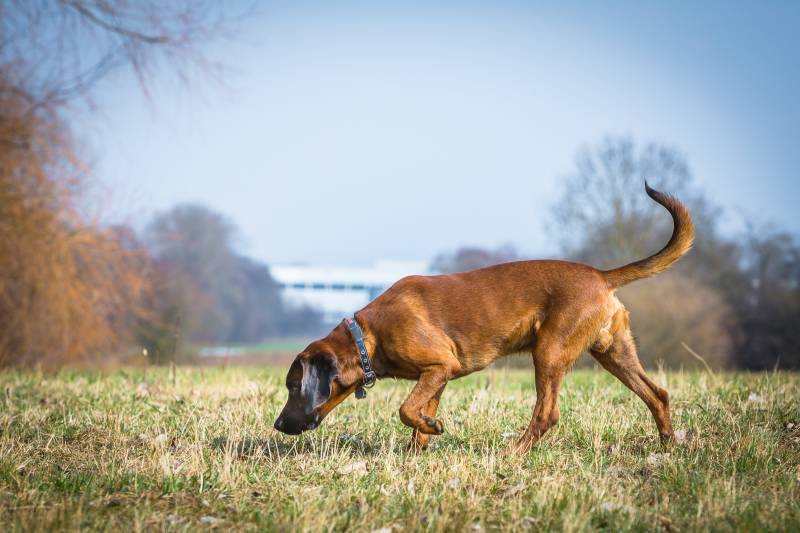 You can start mantrailing with your dog at any time if you see it as a hobby. It doesn’t matter if you start playfully with a puppy or start with a senior dog. Mantrailing is very suitable for older dogs: they can exercise themselves without having to physically exert themselves. However, professional search dogs are already trained when they are puppies.

Mantrailing is ideal for dogs that are motivated by their breed to hunt, such as Weimaraners, Beagles, Vizsla or mixed breeds. When mantrailing, shy and fearful dogs learn to concentrate on one stimulus and ignore others. In general, mantrailing is the right sport for every dog ​​if it feels like it.

Exception: dog breeds with respiratory problems should not take part in mantrailing. You are prone to shortness of breath. These include the pug and the French bulldog.
Mantrailing is a dog sport that you can practice anywhere and in any weather. Dogs follow their natural need to sniff, which is why most of them enjoy mantrailing. Try it out and go tracking with your dog!