The Miniature Schnauzer is an ancient breed of dog. At the end of the 19th century, a new term enriched the world of dogs, and the “Schnauzer” brought all wire-haired Pinschers under one roof. Previously, schnauzers and pinschers are divided into short-haired and long-haired pinschers according to the length of their fur.

The Schnauzer’s original distribution area is in Württemberg and Bavaria. Ratters and rat biters, as the stable pinschers of the time are also called, have their homes on farms. Here they worry like cats about pest control. The farm dog is decimating the rat and mouse populations. He also guards belongings as a stable dog or accompanies horses and carts on their way. 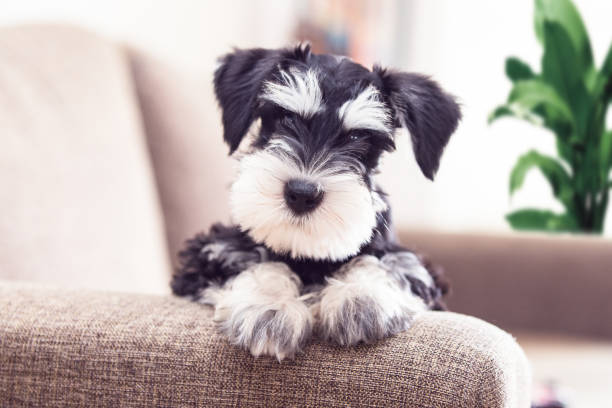 Schnauzers vary in size. The four-legged friend, which has been bred since around 1880 under the name of wire-haired Miniature Pinscher, is the smallest Schnauzer type, towered over by the Medium Schnauzer and Giant Schnauzer.

Its resemblance to the latter is great. He has the character traits of his relatives and the peculiarity of the small dog. The adult Miniature Schnauzer weighs four and a half to eight kilograms and is 30 to 36 centimeters at the shoulder.

Physically a lightweight among the schnauzers, but a real guy in terms of character – this is how the robust and persistent animal shows itself. The stocky, elegant-looking and almost square body is in the typical Schnauzer posture. Typical are the bushy eyebrows that fall over the eyes and the long beard on the head.

The whiskers are not as coarse as those of the rest of the coat, which is made up of wiry and harsh hairs above the well-developed undercoat. In the colors pure black, pepper-salt, black-silver as well as in various shades of gray and in pure white, there is a varied picture. The undercoat is color-matched to black or white.

The coat calls for a comb at least once a week. The hair from the beard and bangs grows back quickly and requires scissors regularly. In order to maintain the typical appearance, a professional trimming is required about once a quarter. All in all, it takes a lot of practice to properly tackle the species’ fur. The rest of the hair is usually left where it belongs – Miniature Schnauzers shed little.

In the house, observing what is happening outside of your own four walls is one of the little one’s great preferences. As close as he is to his family, strangers experience him as reserved at first. If he notices anything unusual, this can be accompanied by a clear bark because of the breed’s exuberant temperament.

The reliable watchdog is only satisfied with less if the human gives it an understandable guideline already in puppyhood. The same applies to the position intended for him within the family pack. The Miniature Schnauzer knows what it wants and a dog handler needs the experience to guide the smart personality in a friendly and consistent manner. Outdoors, Miniature Schnauzers are tireless trotters who like to accompany people. They are affectionate and loyal to their owners. The same applies to relationships with young and very young people. Lively children and four-legged friends who are open to any game make a good team.

Nevertheless, the rough-haired small dog knows how to develop his own quirks, he lacks leadership and demands everyday life. He is downright disrespectful when encountering dogs in confrontations that come up to him. Only early and species-appropriate socialization protects them from this.

Living with the Miniature Schnauzer is noticeably more pleasant if active dog owners can and want to spend a lot of time with the dog. The intelligent Schnauzer is agile – in the head as well as in his movements. He accepts every challenge obediently and courageously.

The high educational effort can be implemented in a playful way. When tracking down hidden objects in the field, when mantrailing, or in dog sports. To please the owner is in the blood of the four-legged friend and the enthusiasm of the animal lasts for a long time.