The pit bull (American Pit Bull Terrier, APBT) is one of the dog breeds that are not recognized by the FCI and originates from the United States. He is one of the popular enemies of the media. Many dog owners are wrong. Because the powerhouse from overseas has many lovable qualities and characteristics and a loyal soul.

The pit bull’s roots go back to the Middle Ages, where dog fights were fought against bears and bulls. In these, the bravest dog should be found, who feared neither inferiority nor death. Some sources claim the pit bull’s early ancestors date back as far as the year 1000.

These are said to have some similarities to modern-day “pits” in a broad sense, with the direct ancestors coming from Great Britain. A mix of bulldogs and various terrier breeds, the fighting-oriented mongrels had to compete against opponents smaller than their ancestors.

In Pied Piper competitions, bets were placed on which dog could kill the most rats around. Dogfights (dog versus dog) were also popular from time to time in Ireland until they were banned throughout Great Britain in 1835. The fights were carried out in the so-called “pits” (dogfighting arenas), which over time became enshrined in the pit bull’s name.

Like many other dogs, the pit bull was brought to the United States of America after dog fighting was banned and British emigration began, where the former pit dogs continued to be used for dogfighting. The United Kennel Club (UKC) was founded in 1898 to give the pit bull a home with a studbook entry. This established the general guidelines for dogfighting in the USA.

11 years later, the American Dog Breeders Association (ADBA) was founded and has developed into the leading American Pitbull Terrier breed club to this day. But when the American Kennel Club (AKC) officially recognized the breed in 1936 and renamed it the American Staffordshire Terrier, many Pitbull breeders and enthusiasts were disappointed. The physical characteristics were too different to “categorize” the different breeds. 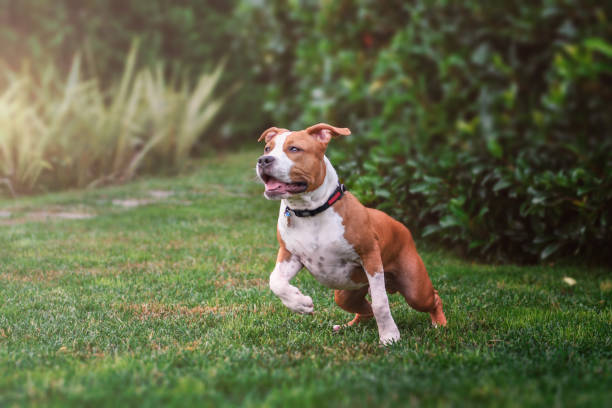 We owe it to the breeders and enthusiasts who have defended the name and questioned the authority of the AKC that we are still talking about the “Pitbull” today. With regard to the American Staffordshire Terrier, one can say that this is to be distinguished from the (American) Pitbull. Especially at today’s FCI shows, one can see that the muscular American Staffordshire Terrier doesn’t have the suppleness and stamina of a pit bull, who can confidently run 50 km in one go.

However, today’s Pitbulls are often a mix of American Pitbull Terriers and other dogs, which is why a breed standard is not recognized by the FCI.

Character and Nature of the Pitbull

Advocates of the pit bull argue with his softcore and claim he is a humanitarian. Even after abuse and long stays in animal shelters, he encounters people with an open, playful nature.

This fundamentally philanthropic attitude can be explained by the fact that in the past pit bulls had to be obedient and friendly towards people, otherwise, they were classified as “useless” and therefore shot. In the course of breeding, only the most obedient (and most robust) specimens were selected.

You don’t leave the pit bull alone with children, but this applies to all dogs. In order for the pit bull to be able to show its positive nature and good character traits, it needs a lot of leadership and a species-appropriate attitude that keeps it mentally and physically busy.

The pit bull bears the (physical) characteristics of a dog that was bred for fighting. The short, dense coat is mostly black or white, with spots of other colors not uncommon. The wedge-shaped head (with a pronounced muzzle), as well as the forward-tipped ears, somewhat resemble the American Staffordshire Terrier. The eyes are set wide apart at the top of the head.

In America, the power pack is used in animal sports, where it provides entertainment as a draft dog in “weight pulling” and on the “dog cart”. Such use does not take place in Germany, although weight pulling is becoming more and more popular here as well. The “Pitti” is used by the police in this country to detect drugs and explosives. Many organizations also train him to be a rescue dog. He is quite suitable as a family dog, whereby a strict education is necessary. More on that in the next chapter. 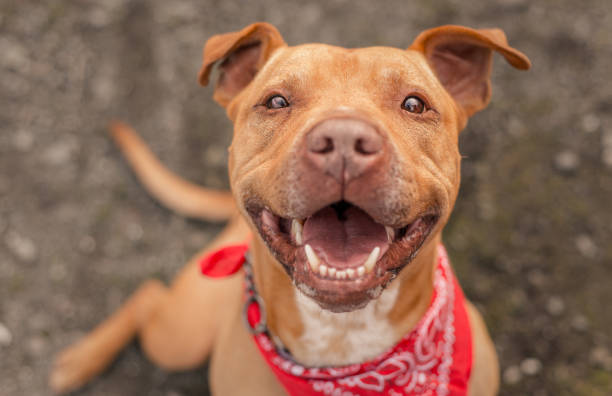 His gentle and playful nature is a mystery to many outsiders given the negative publicity surrounding the pit bull. The pit bull is a very stubborn and assertive dog. He needs an experienced master (or mistress) who keeps him in check with strict guidance and consistent action. If he sees anyone moving dangerously close to the “pack,” he immediately goes on the offensive.

Only with early socialization (in the form of visits to a dog school) can the pit bull’s strong protective instinct be moderated and unnecessary injuries avoided. Long walks and activities (e.g. fetch games, agility, a dog scooting) must also be scheduled so that the pit bull can get rid of its excess energy. Only then can it show its gentle side and be optimally integrated into everyday life.

Owners are also obliged to be able to prove their expertise and reliability: escape-proof rooms, a chip implanted in the dog’s body, and special liability insurance are standard. In addition, it must be proven that there is a special interest in keeping it (e.g. if a dog would otherwise have to go to an animal shelter or to protect the breed). A leash (which can be waived after a successful behavior test, not in all areas) and a muzzle must be attached outside the house.

As with many other short-coated dogs, the Pitbull does not need extensive brushing. A few strokes are enough.

The pit bull is one of the healthiest dog breeds. This is also confirmed by the geneticist Hellmuth Wachtel in his investigations. In some cases, there are autoimmune disorders (demodicosis), allergies (mainly grasses), and skin problems (sometimes skin cancer and irritability of the throat). However, these are not so widespread that one could describe them as “typical of the breed”. Just as with its distant relative, the American Staffordshire Terrier, one can assume an increased risk of hearing damage if the proportion of white is more than 80%.