Rhodesian Ridgeback – The African lion dog has made it from the intelligent hunter over the years to the hearts of German dog lovers. The ridge is also particularly common in Berlin and on Sylt. We would like to show here how South Africa’s only dog breed recognized by the FCI made it to Europe and why the Ridgeback has a sworn fan base today.

The today’s Republic of Zimbabwe in southern Africa was known as Southern Rhodesia in the days of British colonies. Cecil Rhodes, the founder of the colony and a mining company, gave its name. The Rhodesia Ridgeback dog breed, which is recognized by the FCI, also originated in Rhodesia at that time, as the name of the breed already suggests. The colonists had to protect their settlements, livestock, and stables from the lions that lived there.

The only viable alternative turned out to be dogs that we’re able to keep a lion at bay through courage, endurance, and determination in order to give the settler enough time to fire a well-aimed shot at the lion with the firearms, which were still far from developed at the time. The losses among the dogs were numerous. Only the fastest dogs, with perfect command of dashing and retreating, survived the confrontation with the superior lions.

At that time there was only one law for the dogs. The law of the strongest. At that time, the dogs were not expected to mortally wound a lion, only to confront it. In the pack, the dogs, therefore, provided a lion and kept it busy until the hunter was able to shoot the golden shot. An often deadly undertaking for the dogs that contributed to the then natural breeding selection. Only the smartest, most agile, and fastest dogs survived the wild chase.

The farmer Cornelius van Rooyen discovered the dogs of the native Khoi Khoi around 1879 and started crossing them with his own dogs. His own pack was a motley assortment of greyhounds, bulldogs, terriers, collies, deerhounds, and mixed breeds of all breeds.

By crossing the local dogs (also called Hottentot dogs) the Ridgeback should also get its unmistakable name because they already had the distinctive line on the back. Ridgeback roughly translates to back stripe or somewhat expert eel line. In the animal world, the eel line denotes a narrow stripe along the back, which denotes a color that differs from the main fur. But back to the dog and a few years ahead.

In the middle of the last century, the lion dog made it to Europe and also to our home regions. Today it is part of the usual cityscape and you will find it both in Berlin and in Sylt – subjectively disproportionately often. With more than 1,000 puppies registered with the VDH clubs alone, the popularity of the breed can also be recorded in figures.

Since lion hunting is not a pastime for most Europeans, the Rhodesian Ridgeback has also had a different use over the years. In the rest of Europe, he is therefore a busy hunting dog for tracking. In Germany, however, he is not approved as a hunting dog. This is also expressed in FCI group 6, hounds/scent hounds.

Therefore, the Ridgeback is often found in this country as a classic family dog, which feels particularly comfortable with active family people and can show itself its best side as an attentive protector and comrade.

The Character & Essence of the Ridgeback

The Ridgeback has always had a solid character. Due to its pronounced territorial behavior, it is also suitable as a good guardian for the house and yard and as a protection dog for the family. You always feel safe with a Ridgeback as the silent guard has a sixth sense of danger. Lightning-fast reaction speed should not be underestimated. It is also part of the nature of the Rhodesian Ridgeback,

It sometimes takes three years for the character and nature of the Rhodesian Ridgeback to fully develop.

The Ridgeback wants to be an integral part of the family and is a very affectionate fellow. He meets children with a high level of tolerance and serenity and lovingly includes them in his heart. Nevertheless, children, in particular, should learn how to handle the dog at an early age.

The Ridgeback is wary of strangers but not aggressive. However, he will keep an eye on his pack, and even if he appears to be resting, he will be there immediately if he senses danger to his family.

The Rhodesian Ridgeback usually behaves well towards other dogs. This requires early socialization. He rarely seeks confrontation, but knows how to defend himself and does not shy away from confrontation. 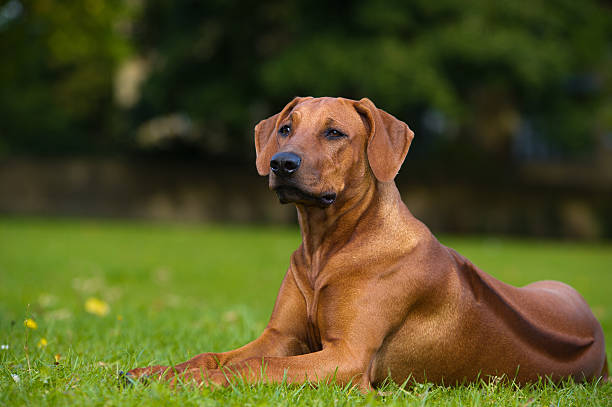 The Rhodesian Ridgeback gets along with other pets, but this should be practiced from a young age. Presenting a cat to an adult Ridgeback can sometimes cause problems. It is therefore advisable to observe the sceneries closely at the beginning and, if in doubt, to refrain from expanding the family.

The Ridge is a running dog. He loves and demands long walks and should be exercised about 3 hours a day. With a lap around the block, this sporty dog ​​breed is simply not challenged. He is also a grateful companion when cycling. Ideally, however, he is not only challenged physically but also mentally. A particularly suitable dog sport for the Ridgeback is definitely mantrailing.

The Rhodesian Ridgeback has a natural hunting instinct. In order to prevent this, it is advisable to let him live out his behavior in dog sports.