For some, the Staffordshire Bull Terrier is a loving family dog ​​and for others, it belongs on the list of dangerous fighting dogs. With a loving upbringing, any Staffbull can become a partner for life. Here you will find everything you always wanted to know about the controversial dog breed.

History of the Staffordshire Bull Terrier

The so-called “Bull and Terrier”, which was bred in England 250 years ago, is considered the ancestor of today’s Staffordshire Bull Terrier. The small, beefy dogs had the strength of a pit bull and the courage and tenacity of a terrier. They lived with the Black Country miners in small workers’ dwellings, where they killed the rats. Rat hunting gave rise to the brutal “rat biting” competition, in which the dog that killed the most rats in the shortest amount of time won. A short time later they also had to do dog fights in the arenas. The aggressive dogs were status symbols of the working class and a profitable way to supplement the small income.

When animal fighting was generally banned in Great Britain in 1835, the breeding of dogs increasingly focused on suitability for families. The breed was finally recognized by the Kennel Club in 1935. The “Staffordshire” part of the name comes from its place of origin in England to distinguish it from the American Pit Bull Terrier. Since June 24, 1987, the breed has been part of FCI Group 3 “Terrier” and is assigned to Section 3 “Bull Terriers”. In Germany, the bull terrier is quite rare today, as its reputation as a brutal “fighting dog” precedes it. 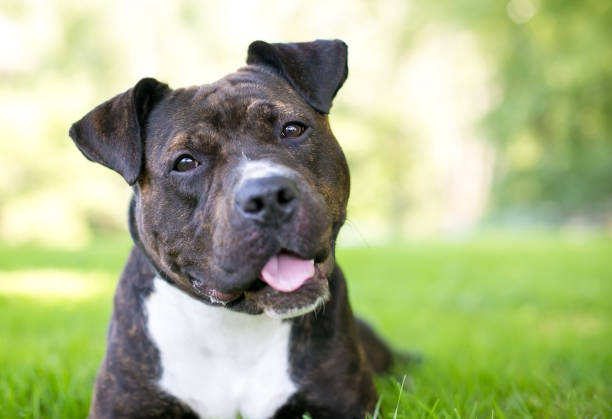 The Staffordshire Bull Terrier is a brave and intelligent dog that is friendly and affectionate with people. The English also call the Staffbull “Babysitter Dog” or “Nanny Dog” because of its child-friendliness. There he is one of the five most common dog breeds. He is loyal to his caregiver but can be very dominant if not trained properly. He is always suspicious of strangers and is reluctant to avoid arguments with other dogs. The pronounced guard and protective instinct anyway and a low stimulus threshold require consistent training. With good socialization and affectionate interactions, the Staffbull can be a great family pet that gets along well with other pets as well.

How Do I Keep a Staffordshire Bull Terrier?

If you want to bring a Staffordshire Bull Terrier home, you should be aware that it is a so-called list dog. Even as a puppy, the dog needs a lot of attention and a strict but loving upbringing. Previous dog experience is essential. Breeding of the breed is banned in most federal states and importing it to Germany is also not permitted. You can only find a reputable breeder in Thuringia, Saxony, Saxony-Anhalt, Berlin, or Lower Saxony. Under no circumstances should you buy a rummage table puppy from Eastern Europe, as they are usually maladjusted or ill.

You can expect a price of around €1000 for a healthy purebred puppy from a breeder. If you don’t want to spend that much money and already have dog experience, you can often find Staffordshire Bull Terriers in need at the animal shelter. When it comes to coloring, you are spoiled for choice between numerous tones. The Staff is available in red, fawn, white, black and blue or in one of these colors combined with white or brindle. When you buy a Staffbull, you are committed to the dog for 12 to 14 years and should be able to offer it a loving home.

Training a Staffbull is not easy and therefore only for people with a lot of dog experience. From an early age, you should encourage the puppy’s gentle, friendly nature and control his dominant, scrappy traits. Especially during puberty, the Staffi likes to test their limits and question the hierarchy. Now it’s time to be particularly consistent and not let the dog get the upper hand. Some members of the breed continue to grow until they are three years old and are getting stronger every day. 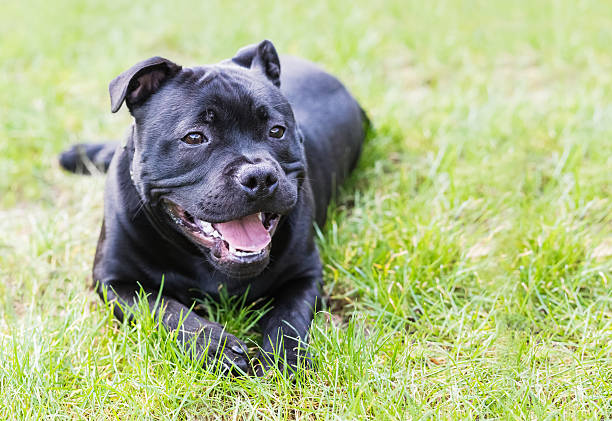 In order for the Staffordshire Bull Terrier to get used to other dogs, attending a dog school is an absolute must. The Staffbull should not be kept in a kennel. He is an affectionate companion dog who is most comfortable in his human pack. Since he can react aggressively towards other dogs and strangers, you should never let your Staffbull run off a leash. With the right upbringing, you can also turn the Bull Terrier, which is notorious as a fighting dog, into a well-balanced and friendly family dog.

Activities with the Staffordshire Bull Terrier

The Staffordshire Bull Terrier is an active and spirited dog that needs plenty of exercises. The more he can let off steam in sports, the more peaceful you will experience him at home. Daily walks, which can be stress-free with a good upbringing, are best. But the dog can also be enthusiastic about other sports. One activity that every Staffbull enjoys participating in is dog sport agility. Running and jumping in a course is a great challenge for the four-legged friend and strengthens the bond between dog and owner. A house with a large garden and plenty of exercises is best suited for the Staffordshire, he will not be happy in a cramped city apartment.