Find out everything about the behavior, temperament, activity and exercise needs, training, and care of the Pomeranian dog breed in the profile.

Origin of the Pomeranian

German Spitz is descendants of the Stone Age peat dog “Canis familiaris palustris Rüthimeyer” and later “Pfahlbauspitz” and are the oldest dog breeds in Central Europe. Numerous other breeds have emerged from them, including the Pomeranian variant. In non-German-speaking countries, Pomeranians are also called “Pomeranians”.

Pomeranians are a relatively young breed. Although the small dogs have been around for a long time, in the past all Spitz with a shoulder height of up to 29 centimeters were uniformly referred to as “small spitz”.

The appearance of the Pomeranian

Lace captivates with a beautiful coat of hair that stands up because of the abundant amount of undercoat. The strong, mane-like collar around the neck and the bushy tail, which is carried boldly over the back, is particularly striking.

The fox-like head with quick eyes and pointy little ears set close together give the Spitz its characteristic perky appearance. The fur can be white, orange, gray, black, brown, and blue in color.

Behavior and temperament of the Pomeranian

The fluffy little fur on thin legs hides a lot of positive properties behind its tousled fur, but above all

In other words: the little pomeranian behaves like a big one. He is bursting with self-confidence, which must be taken into account when raising him.

Its social streak makes the Pomeranian an unproblematic family dog. He is exceptionally affectionate and always wants to be close to his humans. A Pomeranian likes to accompany its owner at every turn. As a rule, he gets along well with animal roommates (cats, small animals, other dogs) and children.

Since the Pomeranian is known to walk well on a leash and is easy to handle due to its small size, it is also suitable for older people.
Pomeranians are alert and immediately sound the alarm: out of innate instinct, they take care of everything that belongs to their owner, i.e. land, house, furnishings, or children. The attentive tip immediately reports any unusual noise.

The Pomeranian (like all small dog breeds) should not be underestimated: Of course, it does not have the need to run like a large dog, but with its triple gait it can easily go for long walks. Pomeranians are also very active and lively and therefore need a lot of exercises. Several walks a day are a must!

But not only physically, but also mentally, a Pomeranian must be fully utilized. The little dog can use his head in mind games.

Training of the Pomeranian

The upbringing of this breed is unproblematic. The Pomeranian would do anything for its owner and has hardly any hunting motivation or stray tendency that needs to be driven out of it. When training a Pomeranian, however, one thing should be considered urgently: the self-confidence of these dogs is really huge in contrast to their body size.

Unfortunately, it is the male specimens in particular that tend to provoke large and strong dogs. However, this “inferiority complex” can be prevented with early socialization and frequent contact with other dogs.

The Pomeranian’s coat needs to be brushed regularly (about twice a week). Although he has very dense and long fur, more is not necessary. Felt formation rarely occurs. Cleaning the eyes and ears is also part of the 1 x 1 of dog care.

Insider tip: Gently brush the fur against the grain and then rub the dog down with a damp towel. After that, he hardly loses any hair for a few days.

For some dogs, it is worth feeding them breed-specifically. There is also special food for Pomeranians, such as Pomeranian Adult dry food from Royal Canin*.

Dogs have a tendency to build up tartar, which is responsible for premature tooth loss. Healthy dental hygiene is therefore particularly important. You can ensure this by brushing the dog’s teeth.

Is a Pomeranian the right dog for me? 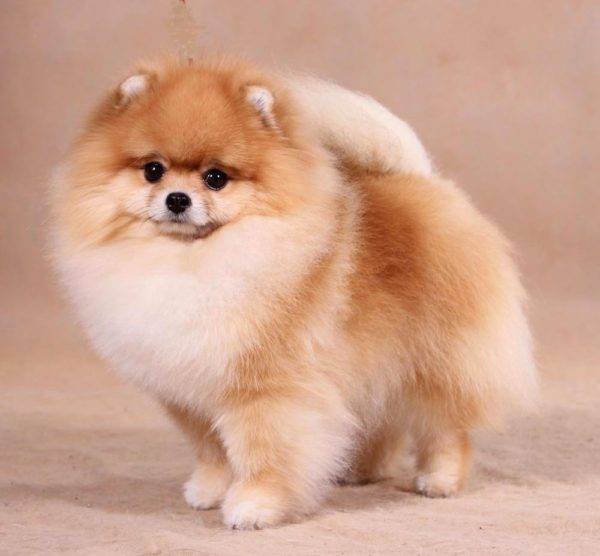 Before you buy a Pomeranian, you should think carefully about whether you can give it a species-appropriate home. The little dog needs more exercise, attention, and brain work than many would think at first. Can you address that?

In addition, great self-confidence should be considered when training, and the dog should be socialized at an early stage. Socializing with other dogs is very important for this breed. Pomeranians also report anything unusual. Do you want such an alarm dog?

If you can do all of the above and want to adopt a Pomeranian, be sure to contact a reputable breeder. The cost of a Pomeranian puppy from a breeder can vary greatly. However, at least $600 to $1700 must be expected. Of course, it’s always worth going to the local animal shelter: Maybe you’ll meet your soul mate here, whether it’s a Pomeranian or maybe another breed.