Dogs can dream. Read here what is really going on in their dreams and how to help your dog when he is having a nightmare.

Does your dog whine in its sleep, roll over and is restless? That’s nothing to worry about. Your dog is probably just dreaming. According to the scientists, dogs can dream just like us and go through similar sleep phases. Read here what dogs dream and what you can do if your dog has nightmares.

When your dog sleeps, he goes through almost the same sleep stages as you. These phases are repeated again and again – in dogs even more often than in humans. While you only go through about five sleep cycles during the night, your dog has about 20 cycles.

At this stage, the dog has closed its eyes and is beginning to fall asleep. His muscles relax, causing them to twitch at times.

The dog is sleeping now, but not yet in deep sleep. About half of a dog’s entire sleep cycle consists of this phase. His whole body becomes calmer and completely relaxed.

Now the dog is in a deep sleep. He is breathing very calmly and his heart is beating slowly. Your dog will now hardly react to noises.

About 20 minutes after falling asleep, your dog has entered the REM phase. This is where most people dream. REM stands for Rapid Eye Movement. Both humans and animals move their eyes back and forth quickly during this sleep phase. This phase is much shorter in dogs than in humans.

But it’s not just his eyes that move: the dog often moves his legs or mouth and twitches his eyelids, for example. Many dogs will whine, howl, bark, or wag their tails during this phase. These are all clear signs that your dog is dreaming.

After each REM phase, there is a brief waking phase. The dog took over this sleep phase from the wolf: Wolves can quickly check whether their sleeping place is still safe or whether enemies are nearby, even while they are sleeping. The waking phase is therefore vital for wolves.

What do dogs dream

Scientists agree that dogs can dream – and they do so more often than humans. What dogs dream of, however, cannot be said unequivocally.

However, it is very likely that dogs process what they experienced the day before in the dream. This means your dog probably dreams of food, toys and you too. According to a study by Harvard University, the dog’s owner even plays a central role in the dream.

It is unclear whether dogs remember their dreams. And if so, whether they know that this is just a dream and not something they actually experienced.

Dreams depend on race

A dog’s dreams are probably dependent on its breed. What a dog loves to do most (or what it was originally bred to do) will happen to it in a dream. For example, a Beagle may dream primarily of food, a Doberman of unwanted visitors that he wants to drive away, and a Munsterlander of a rabbit he races after.

It is a fact that small dogs dream more often than large ones. For example, while a toy poodle dreams about every ten minutes, an Irish wolfhound only experiences a dream about every hour or two of sleep. The experts assume that the dreams of larger dogs are longer.

Dogs that feel safe and secure sleep better and dream more intensely than dogs that don’t feel well. Your dog’s sleeping position reveals a lot about its well-being.

Can a dog have bad dreams?

Dogs can have nightmares too. They are then often particularly restless, barking or whimpering, twitching or kicking. It’s best not to wake your dog up if he’s having a bad dream. Otherwise he could get an additional fright and be very confused at first.

Tip: If you realize your dog is having a nightmare, gently place your hand on his stomach. Talk to him in a low voice. Ideally, he doesn’t wake up then, but calms down again.

Why do dogs dream? 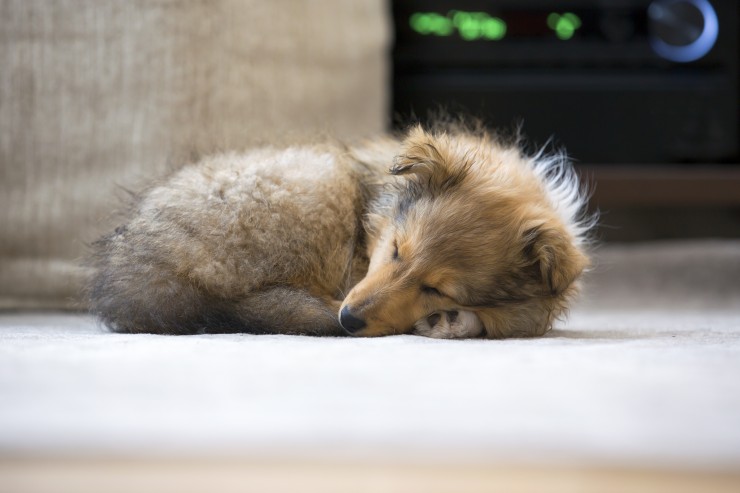 In the dream, the dog has the opportunity to process what it has experienced. What he has previously learned, he can consolidate in the dream. That’s why a good night’s sleep is especially important for puppies: they learn a lot every day. During sleep they can then process the impressions well and recover.

But it is also important for your adult dog to sleep soundly: if a dog sleeps poorly for a long time, it will suffer from a lack of sleep, which can have physical and psychological consequences. So make sure that your dog can recover well and process what it has experienced the day before.