Pomeranians are popular companion dogs that are becoming more and more common these days in city parks. Along with Chihuahuas and Yorkshire Terriers, they are among the smallest dogs in the world. They share a breed standard with the four other German Spitz types – so they are not to be confused with the Miniature Spitz (Kleinspitz), which is significantly larger.

Contents hide
1 The Smallest Spitz in a Cheeky Plush Toy Look
1.1 The size is crucial: all Spitz types in comparison
1.2 Pomeranian Appearance – Cute plush ball with a cheeky face
1.3 Teddy and fox – The coat types of the Pomeranian
1.4 Where does the teddy pom come from?
1.5 Preferred colors for Pomeranian
1.6 Other colorations that occur
2 The History of the Pomeranian in Germany and Internationally
2.1 Is the Pomeranian really from Pomerania?

The Smallest Spitz in a Cheeky Plush Toy Look

Pomeranians are known for their small body size. Not all breeders and fans of the breed agree on how small a Pom can be. According to the FCI standard, the optimal height at the withers is 21 cm, 18 to 24 cm are tolerated for males and females. The AKC (American Kennel Club) specifies a permissible height at the withers of between 18 and 30 cm. Teacup Pomeranians are also being offered more and more often on the Internet – the miniature version of the Pomeranian easily fits into a coffee cup even as an adult.

The size is crucial: all Spitz types in comparison 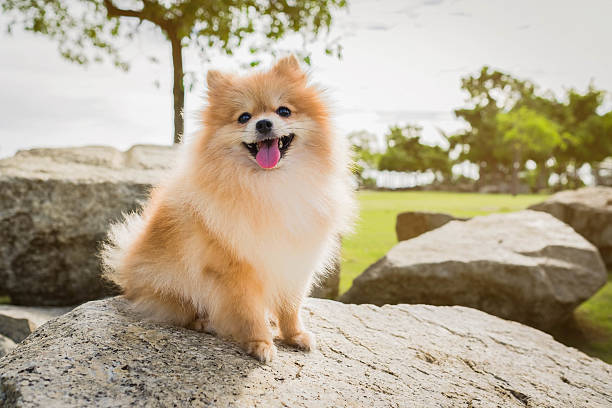 All five official Spitz types share a breed standard and are considered size variants of the same breed, although some come in specific colors. The physique and the coating structure also differ slightly.

Teddy and fox – The coat types of the Pomeranian

Like all German Spitz, Pomeranians have a two-layer coat with a very dense, fluffy undercoat that allows the topcoat to stick out. The hair should never be wavy or frizzy and form a lush mane around the neck. Bushy feathering also forms on the backs of the legs and on the tail.

Where does the teddy pom come from?

Minor internet celebrities like the Pomeranian Boo, followed by millions of fans on Instagram, look only roughly similar to the Pom according to the breed standard. Although the breed standard prohibits grooming, many owners have their puppies trimmed by the barber. When the undercoat is gently trimmed and the hard topcoat is cut into shape, the result is the cute teddy look that is so popular on social media.

Other colorations that occur

The History of the Pomeranian in Germany and Internationally The Pomeranian is the smallest of the German Spitz. The breed was created through careful breeding selection: All German Spitz are descended from the Wolfsspitz, which has been bred smaller and smaller over the years. The first records of the dwarf type date back to the 18th century. Prominent breeders contributed to the early spread of the breed: In 1767, Queen Charlotte, the wife of the then British King George III, brought the first specimens to Great Britain, where they are still one of the most popular domestic dogs today. Queen Victoria also devoted herself to breeding Pomeranians (and 14 other breeds).

Is the Pomeranian really from Pomerania?

Early forms of Pomeranian were discovered in Pomerania in the 18th century and exported abroad. White poms in particular were very popular with the English nobility. Today’s breed standard only developed in the course of the 20th century, as breeders in the USA and England preferred smaller and smaller dogs in breeding and crossed in other coat colors. It is not yet known which breeds were crossed to expand the genetic color palette. Most Teacup Poms are not purebred but are Pomeranian Chihuahua mixes.