The squishy face, compact physique, and wheezy breathing make the pug one of the most well-known dog breeds in the world. The small dogs are suitable for everyone – whether for families, single people, or seniors. Find out everything about the history, character, attitude, and care of the pug in the profile.

Contents hide
1 History of the Pug
2 Traits and Character Traits
3 Purchase a Pug
3.1 What do I need to pay attention to when purchasing?
4 Puppy Development and Education
5 How to Keep a Pug
5.1 Activities with the pug

History of the Pug

Today, the pug is a popular companion dog and is best known for its friendly and bright nature. But how long has the breed as we know it existed?

The origin of the breed is probably more than 2000 years ago in the Chinese Empire. The Chinese bred the breed as an imperial dog out of some mastiff-like dogs. It was the emperor’s privilege to own and touch this breed of dog. Presumably, however, dogs that were not suitable for breeding were sold to the public at a high price by the breeders. The breed also spread as the Chinese emperor gave pugs to other dignitaries as a token of appreciation. The ancestors of the breed did not come to Europe until the beginning of the 16th century with the Dutch East India Company. The Moppel was particularly popular with the noble ladies and was also immortalized in some historical paintings. 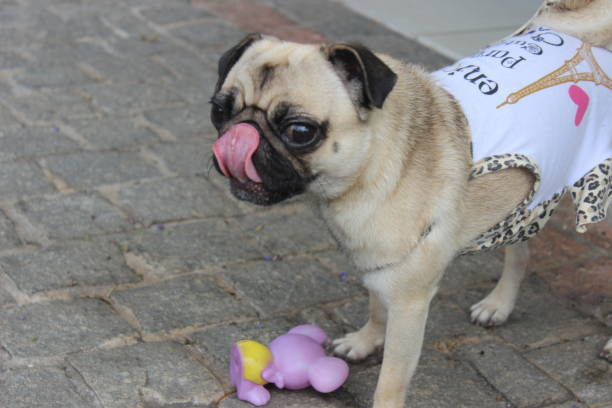 The Dutch and Germans called the dogs Mops, derived from the Dutch verb “mopperen” – “hum”, which is probably due to its noisy breathing. The breed was officially recognized in England and later included in FCI Group 9. In the group of companion and companion dogs, the pug belongs to Section 11, the small mastiff-like dogs. Unfortunately, over time, the breed developed into an absolute fashion dog and the trend towards an ever flatter nose became modern. Because this trait caused the pug to have trouble breathing, the official FCI standard was changed in 2010. Today, breeding is back to the original look, with the nose protruding a little further.

Even if he looks a bit grumpy, the pug is a dog with a charming, happy, and friendly character. Despite its small size, an intelligent dog is an idiosyncratic fellow who charmingly lets its owner understand what it wants. He usually gets along well with his peers but is sometimes misjudged because of his rattling breathing. The pug is not easily disturbed and has no guard or hunting instinct.

The little dog is sensitive to its people and always attentive, which is why training it is not difficult. Since the breed was originally bred as a lap dog, the dogs prefer to be with you at all times and do not like to be left alone at home. Pugs are good for a laugh and don’t mind if you dress them up in fun clothes.

Before you buy a pug, you should be aware that you are committed to the animal for at least 12 years. You must be willing to devote yourself to the animal during this period and to take good care of it. It doesn’t matter to the little dog whether you have a large house with a garden or a small city apartment because he feels comfortable everywhere. Not only because of his friendly nature, he is a great family dog ​​and also gets along well with small children. Since the dog does not like to be lonely, you should not leave it alone for long or even go on vacation without it.

Depending on where you buy your puppy, the price can vary greatly. For a healthy, purebred puppy from a breeder, you should expect prices of between €1000 and €1800. However, it is worth paying that much so that you get a well-cared-for and healthy dog. It is particularly important that the parent animals breathe freely and have a relatively long nose. You will always find pugs in the animal shelter that are in need and are looking for a new home.

Despite its small size, the little pug also needs consistent training. The intelligent dogs quickly understand what their master or mistress wants from them. Due to his independent character, he can be a bit stubborn. You have to make it clear to him early on who’s in charge. It is particularly important that the dog is socialized at a young age so that it can later get along with other dogs and other people without any problems. Attending a dog school can be a great idea, especially for puppies.

How to Keep a Pug

Activities with the pug

The Pug is a dog that would like to be active but just can’t because of its physical abilities. Depending on how pronounced the dog’s shortened nose is, he can do more or less sport. Overall, the breed does not have a particularly high need for exercise. They occasionally prefer to just lounge on the sofa and get their stomach rubbed. Short walks and fun games are all to their liking. For people who want to successfully do sports with their dog, the little Moppel is absolutely not suitable. Their compact physique and flat nose hinder them in every sporting activity.