Along with the Mudis and the Pulis, the Pumis are one of the three major Hungarian herding dog breeds. In their homeland, the shaggy terriers take on all the tasks of large driving and herding dogs. They combine the intelligence and protective drive of German shepherds with the drive to work of terriers. If you want to keep a Pumi as a family dog, you have to offer him a lot.

Contents hide
1 External Characteristics of the Pumis – The Tousled Shepherd Dog with a Terrier Character
1.1 The Pumi from head to tail
1.2 Coat and colors of the Pumi
1.3 Desired color types
2 Historical Outline of the Origin of the Pumis
2.1 Ancestors of the pump
2.2 The development of today’s breed standard
3 Nature and Character of the Pumis – Always Ready for Action

Curly Pumis appear larger overall than they really are, as the medium-length, poodle-like coat stands out rigidly. They have a square build, always keep their heads high and alert, and their stretched skulls are clearly reminiscent of terriers. Characteristics such as size and weight are not selected particularly strictly, more important are characteristics such as fitness for work, color and texture of the coat, and health. Males measure between 41 and 47 cm at the withers; according to the FCI breed standard, 43 to 45 cm is ideal. Bitches are slightly smaller with a height at the withers of between 38 and 44 cm. Ideally, males weigh 12 to 13 kilograms and females a maximum of 11 kilograms. Deviations of up to 2 kilograms are tolerated in inbreeding.

The Pumi from head to tail 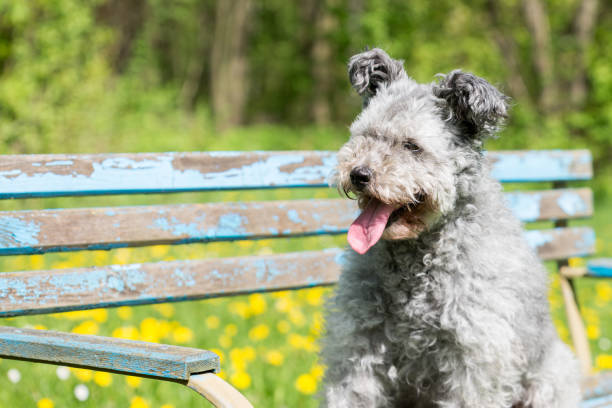 Coat and colors of the Pumi

The Pumi’s shaggy, curly coat grows in dense tufts of wiry topcoat and soft undercoat. The guard hairs point upwards on the ears. They only occur in one color, with dark hair types often lightening on the face, chest, and legs. Fawn Pumis may sport black or gray masks on their faces and ears, or have a cloudy, dark sting down their backs. Distinctive is the long, tangled hair on the underside of the tail, which protrudes in all directions down the back when carried upright.

Historical Outline of the Origin of the Pumis

Pumis have only been selected and propagated for breeding since the early 20th century according to modern breeding and breed understanding. Previously they were selected by Hungarian farmers primarily based on their ability. So the breed came about more or less by accident, just like Mudi and Puli. The latter was common in eastern Hungary, while mudis were more likely to be found in the south of the country. Pumis originated in the western highlands.

Ancestors of the pump

The development of today’s breed standard 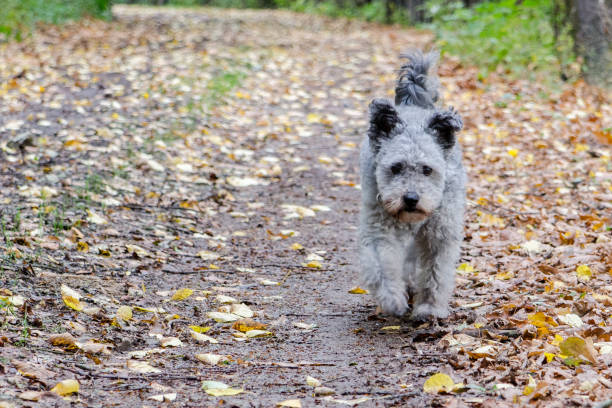 The first drawings and descriptions of Pumis in Hungary date back to 1815. At first, they came in many different colors. Even the decline in the population during World War II did not change the variety of colors. It was not until the 1950s that breeding selection was limited to a few color varieties, as a result of which some hereditary diseases crept into the gene pool.

Nature and Character of the Pumis – Always Ready for Action

Pumis love action and communicate loudly: they bark, howl and jump to express their feelings. Single owners could be overwhelmed by their play instinct in the long run – they feel most comfortable in active households with several playmates. They jump at the slightest motivation immediately. If you are looking for a playmate whose party mood never ends, the Pumi is the right companion.