Pulik are closely related to the other large Hungarian herding dog breeds, the Pumi and Mudi, but at first glance they hardly resemble them. According to the FCI, the typical cord hair is mandatory for breeding dogs, although this does not occur naturally. In a brief overview of the breed, we will show you how to get your Puli’s dreadlock mane under control.

Contents hide
1 What is Hidden Under the Felt Cords?
1.1 Standards for external characteristics of the pulis
1.2 The exceptional coat of the Pulis
1.3 Permissible colors for purebred Pulis
2 The History of the Hungarian Shepherd Dogs – The Cattle Dogs from the Carpathian Basin
2.1 Puli, Mudi, and Pumi – who came first?
3 The Nature of the Pulis – Anything but a Hippie

What is Hidden Under the Felt Cords?

Under their thick dreadlock mat, Pulik hide a very sporty and compact body. If the coat is combed and trimmed regularly, contrary to the recommendations of the FCI standard, Pulis look very similar to their slightly larger Hungarian relatives, the Pumis. The ideal height at the withers for males is 41 to 43 cm, with a deviation of 2 cm being tolerated. With an ideal height at the withers of between 38 and 40 cm and a maximum weight of 13 kg, bitches are slightly smaller and significantly narrower than males. The minimum weight for males is 13 kilograms.

Standards for external characteristics of the pulis 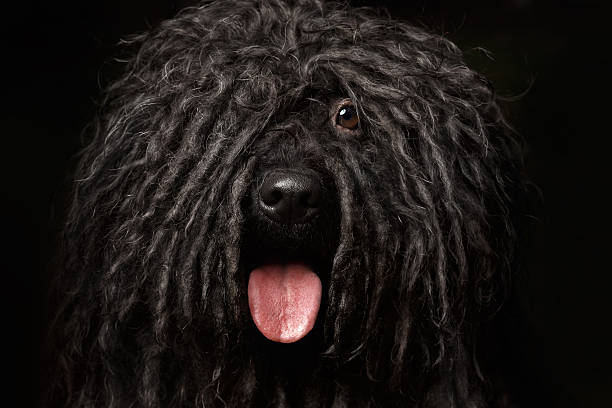 The exceptional coat of the Pulis

The skin of the Puli lies tight and is very darkly pigmented. The dense coat is very dense and wavy in puppies. Growing dogs develop tufts of hair that tend to form villi and cords. The ratio of hard topcoat and soft undercoat must be right so that the hair remains easy to care for and the desired strings form.

The ancestors of all three Hungarian Shepherd Dogs were most likely brought to Europe in the 9th century by Asian nomads who drove cattle over long distances. Hungarians are very proud of their Pulis, which they were not legally allowed to breed after the Habsburg conquest of Hungary until the mid-19th century. “Ez nem kutya, have puli” – “It’s not a dog, it’s a Puli”, is a Hungarian saying of appreciation for the dogs with the many pigtails.

Of the three known Hungarian shepherd dog breeds, the Puli is in all likelihood the oldest breed. Similar dogs were immortalized on Mesopotan vases around 3000 years ago. Until the 19th century, the breeds were not considered separately but primarily selected based on their suitability for herding work.

The Nature of the Pulis – Anything but a Hippie

Pulik are hardworking working dogs with only one thing keeping them from work: they are very susceptible to hot temperatures, as the corded coat acts like a warm blanket and not insulating like straight or curly-coated dogs. If your rasta head seeks shade in the summer and doesn’t feel like exercising, you shouldn’t push him to do it. If he is not restricted by excessively high temperatures, the Puli is spirited and willing to work.