The Pyredoodle is a newer hybrid or designer dog breed – a mix of the Great Pyrenees and a Standard Poodle. As a companion dog, the Pyredoodle has a lot to offer the right person or family!

If you came here looking for information about the Pyredoodle dog, keep reading to learn all about this unique hybrid dog breed!

Purebred Dogs and Designer Dogs – The Controversy and the Science 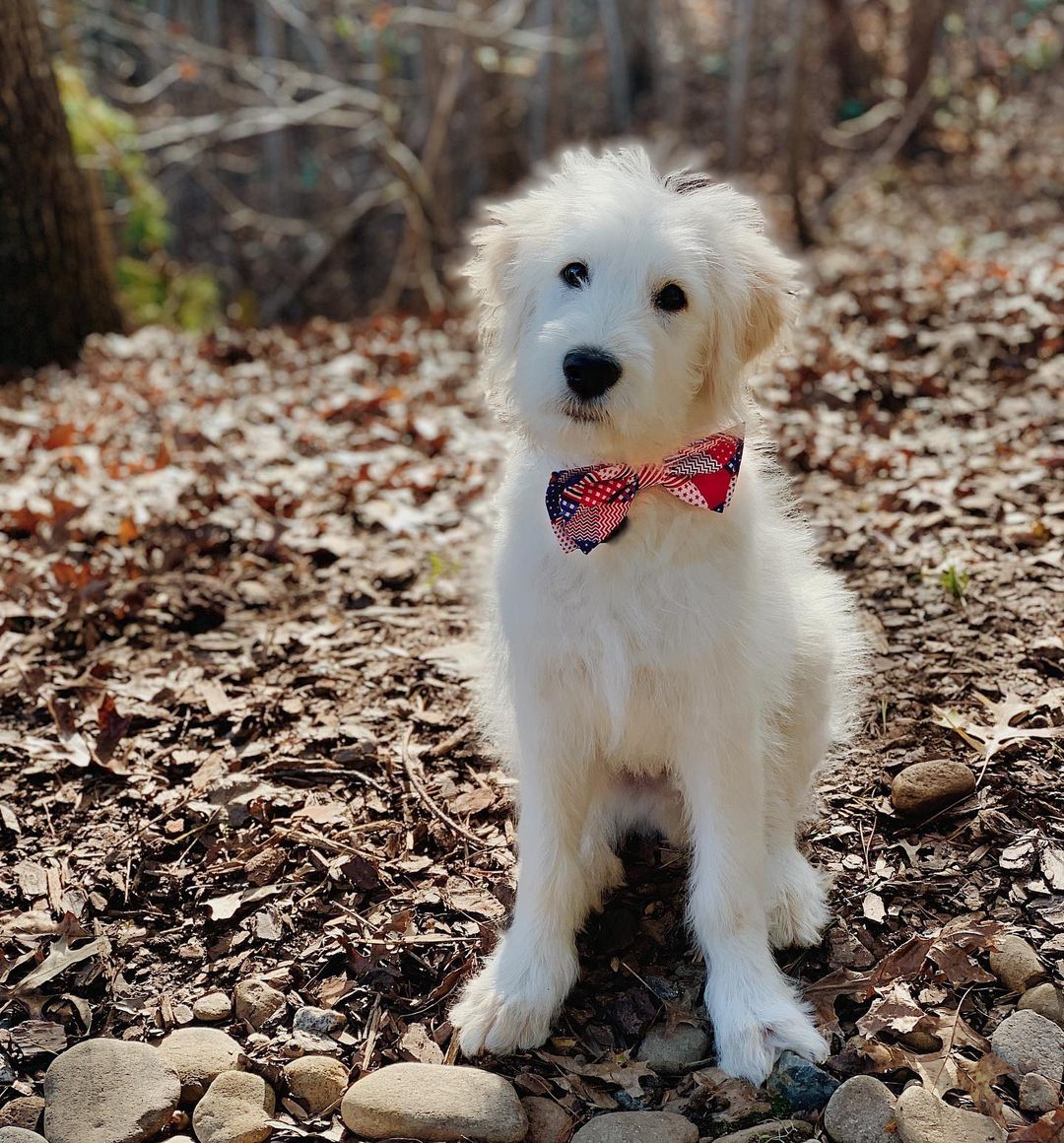 If you’re a dog lover but not a dog breeder or canine biologist, you may not know that not everyone is a fan of “designer” or hybrid dog breeds.

Many purebred breeders believe that crossing two different purebred dogs dilutes the pure breed lines they have worked so hard for.

Conversely, many canine biologists believe that crossbreeding is a positive measure of increasing the health of purebred dogs, many of which have limited gene pools that can lead to serious health problems.

This premise, known as “hybrid vigor,” states that introducing greater genetic diversity into a limited gene pool will strengthen the overall health of the breed and reduce the likelihood of future genetic health problems.

While we can opt for a purebred dog breed if there are certain traits or traits that we particularly love about that breed, there is also a reason the mutt is one of the most popular dogs in the world!

The Pyredoodle – a great mix of Pyrenees poodles 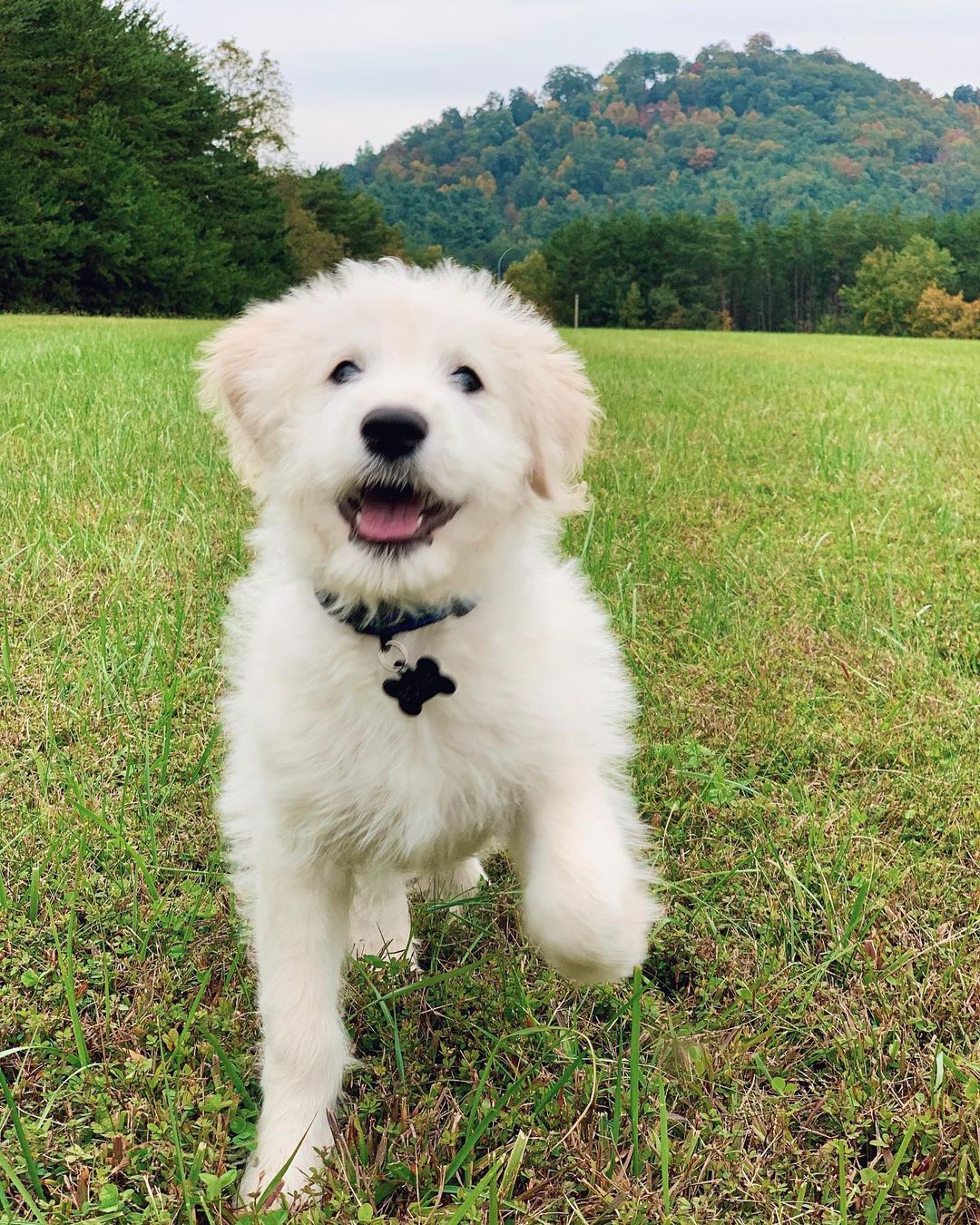 The Pyredoodle is a hybrid dog that is created (man-made) when a breeder crosses a Pyrenees purebred dog with a standard purebred Poodle dog.

There are different levels of the cross here. In general, the first generation, or F1 cross, is a litter of puppies that came from a cross between the Great Pyrenees and the Standard Poodle.

The second generation, or F1B, is a litter of pups that resulted from a cross of a Pyredoodle with one of the Great Pyrenees or a Standard Poodle.

The third generation and later, or F2, F3, F4, etc., is a litter of pups that came from a cross between two Pyredoodle parents. 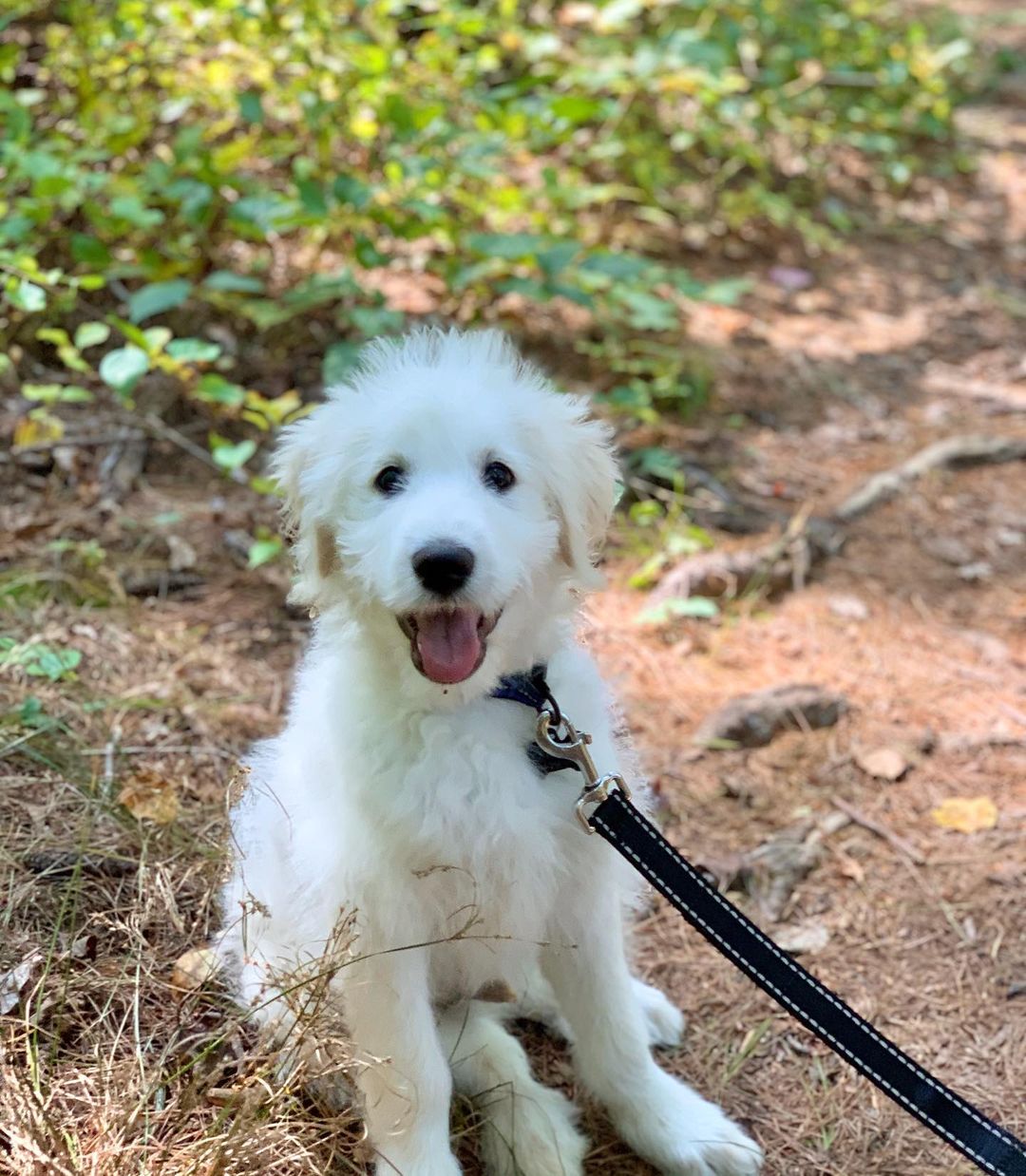 In the first generations (F1 and F1B), it is unpredictable which genetic traits a puppy will inherit from a purebred dog parent.

Here you can see the greatest variation between the pups even within a single litter.

The later the generation (F2 or later), the more control the breeder can have over the appearance, personality, traits, health issues, coat type, and other important traits of the resulting puppies.

If you are looking to acquire a Pyredoodle with certain traits, your best bet would be to find a breeder who specializes in later-generation Pyredoodle puppies (F2 or higher).

Origins of the Great Pyrenees 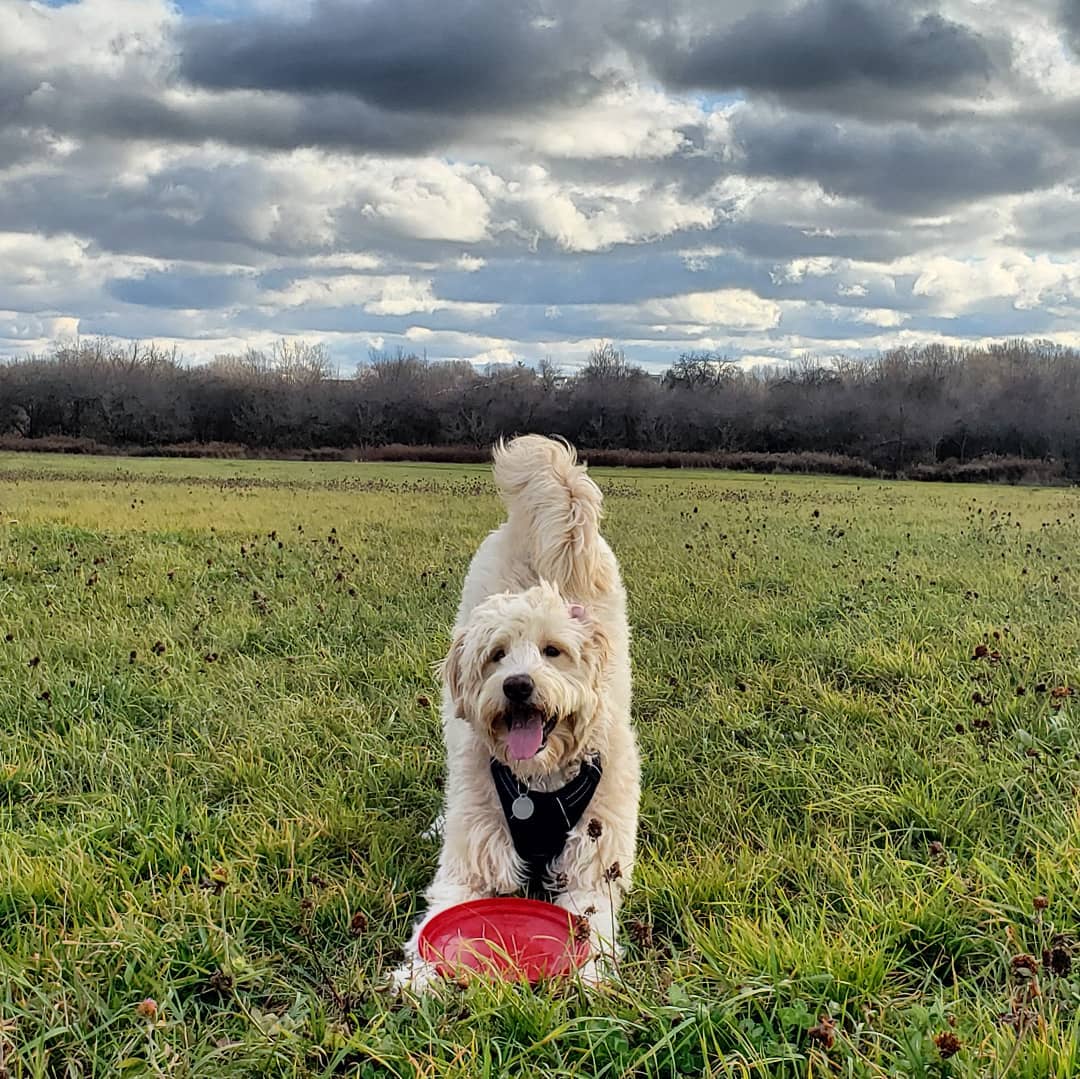 The climate in the Pyrenees is quite cold, especially in winter, and this dog’s lovely, thick fur coat will appeal to generations of outdoor pursuits that protect sheep and other animals from fearsome predators like wolves and bears!

The local name of this dog is Le Grande Chien des Montagnes or “the great dog of the mountains”.

This is a really old breed of dog.

Canine biologists have dated remains of this breed as far back as the Bronze Age (from 1800 BC).

Origins of the poodle 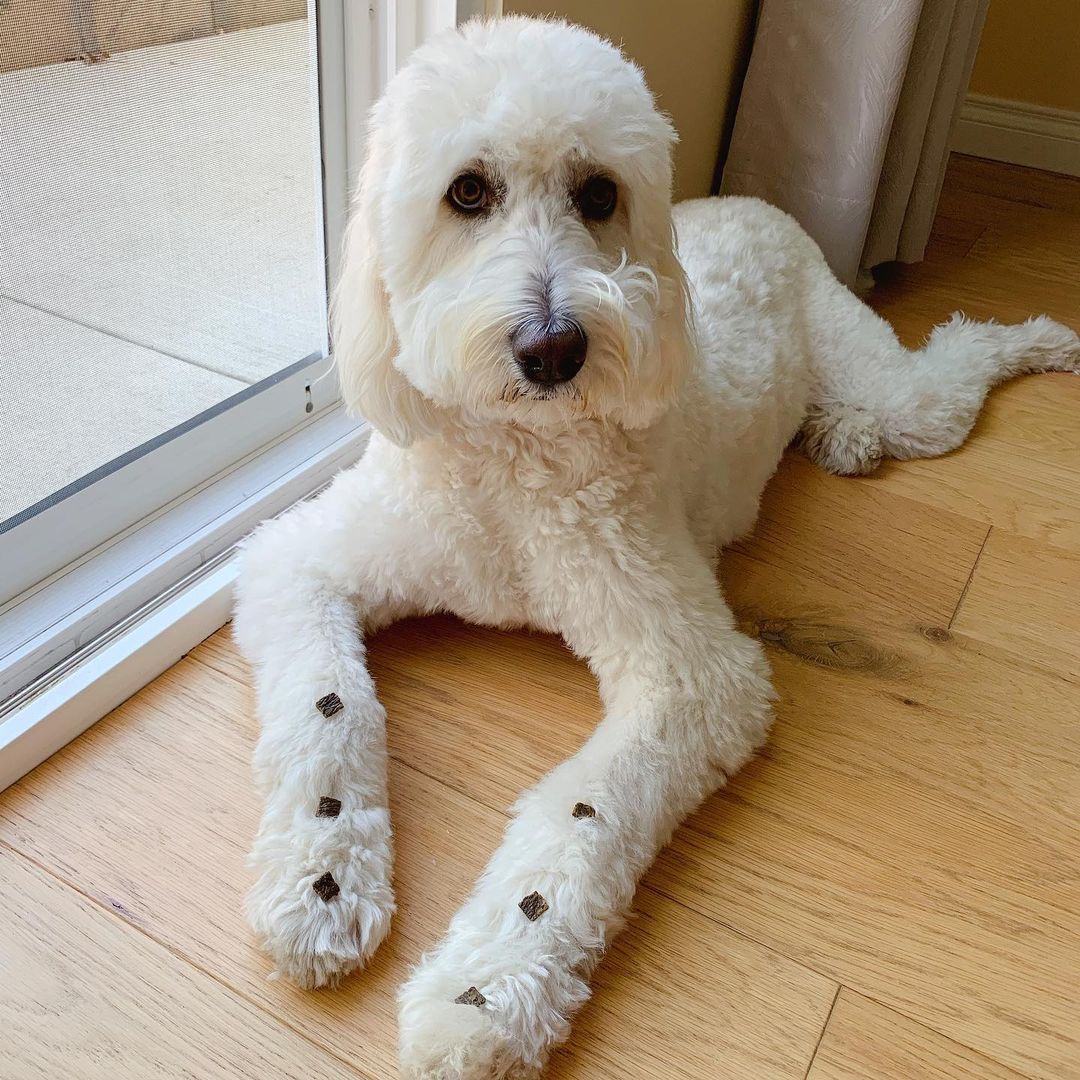 The modern poodle is bred in three sizes: toy, miniature, and standard.

They are more likely to be called “caniche” or “duck dog”. And “poodle” in French is “pudelin”, which means “splash in the water”.

This name refers to the work of this water-loving dog retrieving fallen ducks from lakes and rivers for hunters. This breed of dog is at least 400 years old.

The Pyredoodle has been described as “the best hits” of the Great Pyrenees and the Standard Poodle Dogs.

Of course, you’ll find greater stability in the puppy traits with later generations of Pyredoodles, as mentioned in an earlier section here.

The size, height, and weight of a Pyrenees Poodle Mix dog 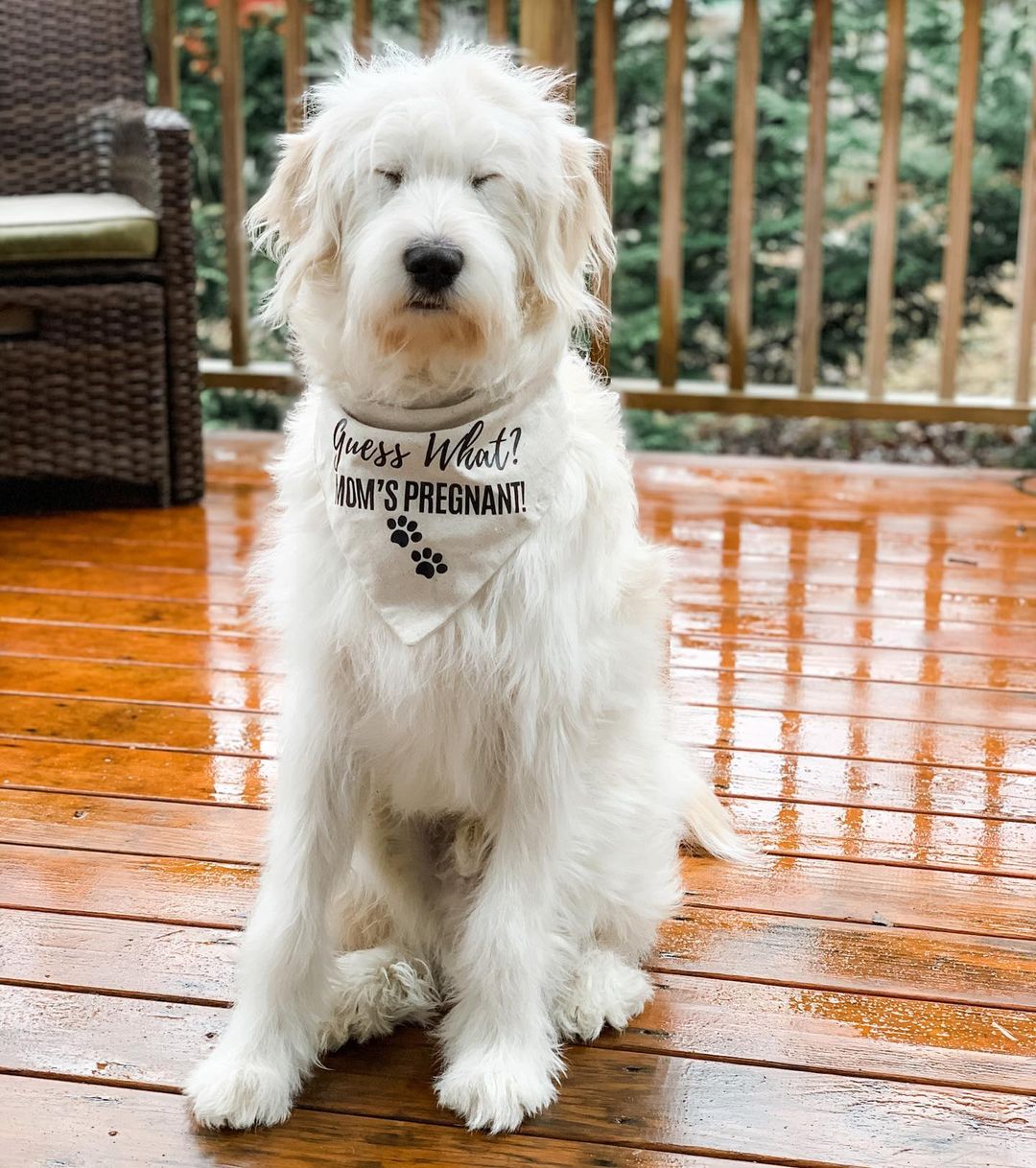 When fully grown, a Great Pyrenees dog can easily exceed 100 pounds, although 85 to 100 pounds is the range.

These dogs are typically 27 to 32 inches tall.

A normal adult poodle can weigh anywhere from 40 to 70 pounds, with adult males outweighing women about 10 pounds on average. Standard adult poodles can be 10 to 15 inches tall.

From this mix of genetic traits, it can be estimated that a fully grown Pyredoodle dog weighs between 40 and 100 pounds and is between 10 and 32 inches tall!

Meeting each parent dog in person will give you a better sense of your pup’s weight and height.

Appearance, coat, and grooming for a Great Pyrenees Poodle dog 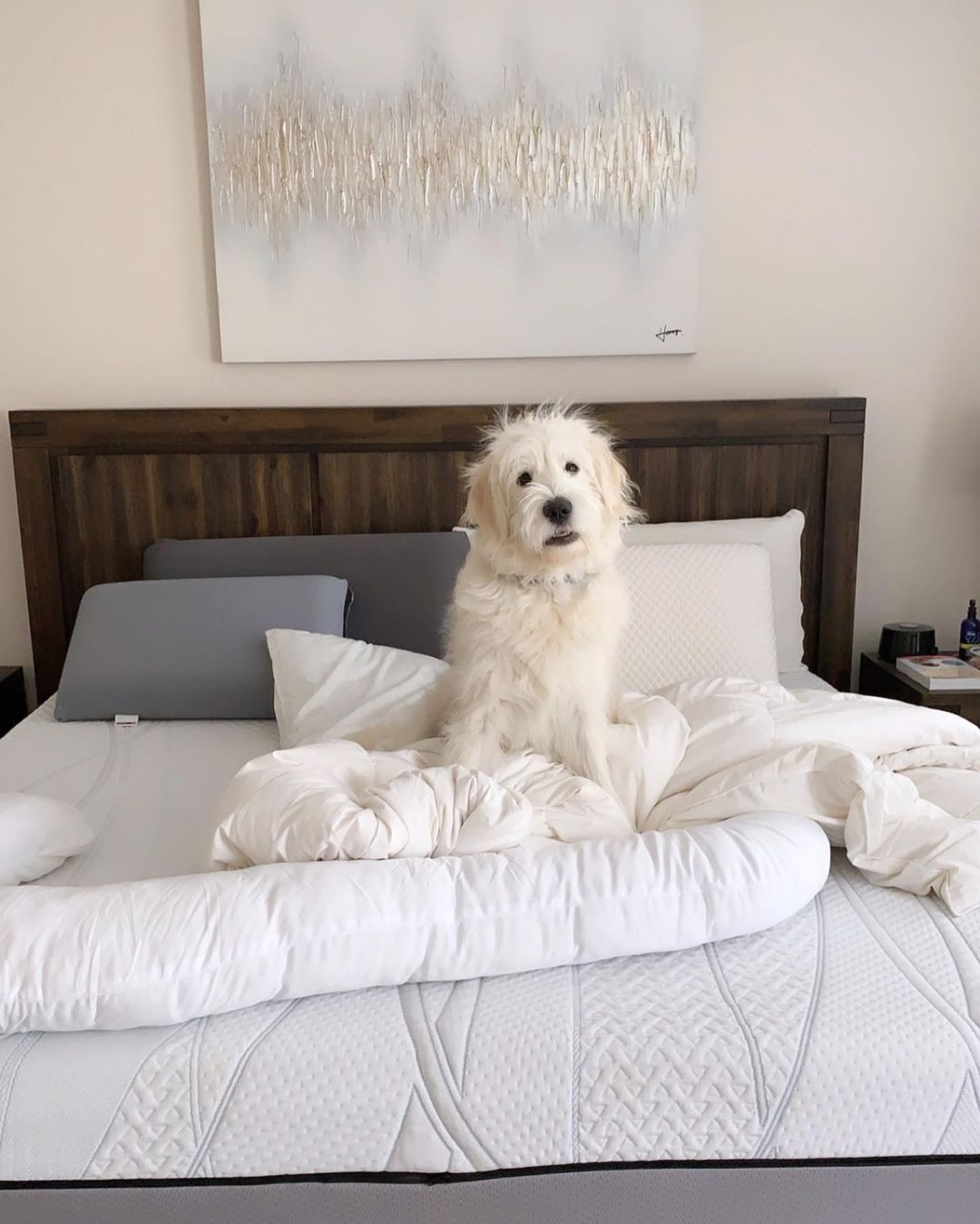 One of the most popular traits of the standard poodle is this breed of dog’s supposedly “hypoallergenic” coat.

This is because the fur catches hair before it can fall to the ground.

The dog of the Great Pyrenees, on the other hand, has a thick, dense, double-layered layer that sheds regularly and can lose a lot with changing seasons.

With previous generations of Pyredoodles, all bets are so far off whether your puppy will inherit the heavily buried, thick, long layer of the Great Pyrenees or the curly, wiry, unsealed layer of the poodle.

Either way, you need to groom and groom your puppy regularly and want to invest in professional grooming to reduce workload and keep their coat and skin in the healthiest condition.

Personality & temperament of a Great Pyrenees mixed with poodle dog 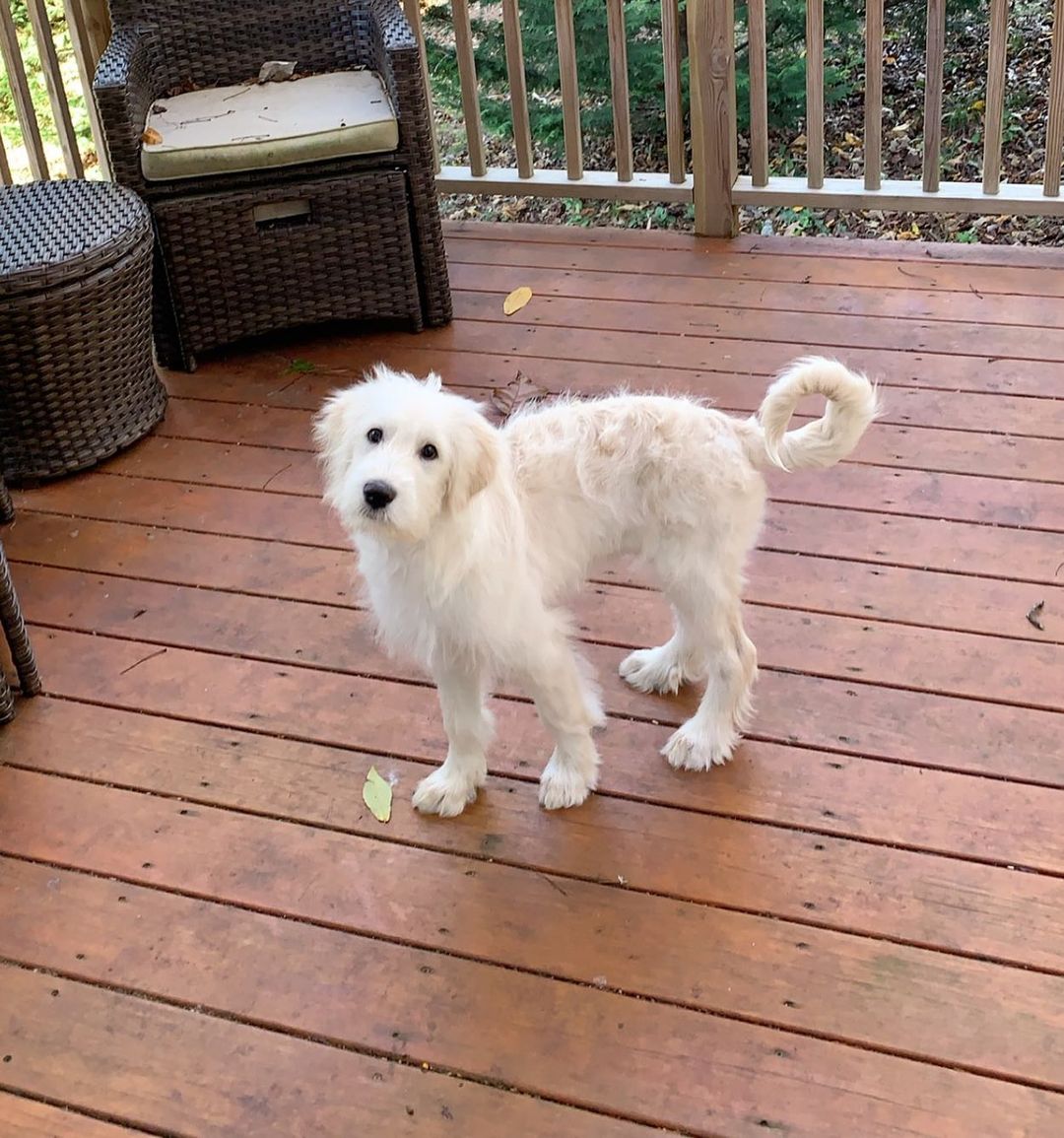 The Pyredoodle program is widely known as an affectionate, kind, affectionate, and social puppy who does very well when spending time with “his” people in an active lifestyle.

Some people call Pyredoodles the “nannies” of the canine world for their devotion to herding and protecting “their” charges!

Pyredoodle dogs can inherit genetic health sensations from either or both parent dogs. For this reason, it is important to verify that parent dogs have been tested for any known health issues that may affect their breed.

Socialization and training needs for a Pyredoodle

The Pyredoodle is a mix of two very intelligent, independent, and driven parent dogs. It will be very important to start socialization and training early, using only positive training methods and lots of rewards as motivation.

Is the Pyredoodle a good family dog?

Both parent dogs tend to be excellent guard dogs. Both are highly intelligent with strong instincts to guard and protect “their” people.

Both will be warm and loving with family and of course, reserved for strangers.

Most importantly, while the watchdog trait is strong in both purebred parent dogs, neither dog is aggressive and both are intelligent enough to be easily trainable. 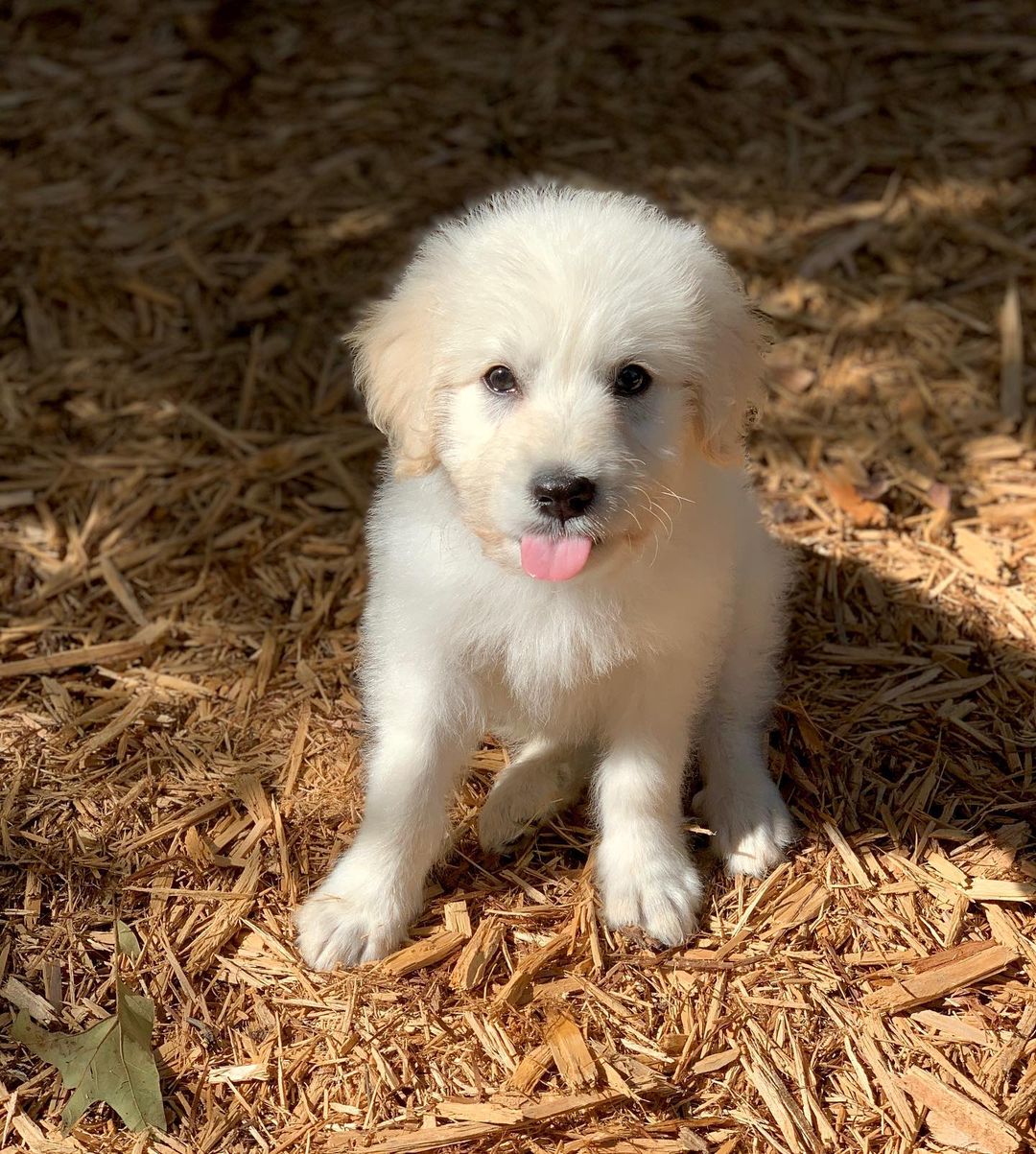 Great Pyrenees poodle puppies will be very cute – you can count on that.

For this reason, it is important to do all of your research before contacting breeders and visiting available litters of Pyredoodle puppies!

The healthiest Pyrenean Poodle puppies are sourced from respected and responsible Pyredoodle breeders who put their puppy’s health above everything else, including appearance traits.

Responsible Pyredoodle breeders should ensure that their parent dogs are always pre-screened and tested for known genetic health problems prior to breeding to prevent preventable health concerns from being passed on to future litters of Pyredoodle puppies.

For the right person or family, a Pyredoodle hybrid dog can make a wonderful family and canine pet!