The Spanish water dog is still very rarely seen in this country. But more and more people are discovering what a versatile and loyal companion it is. He can be taken on a wide variety of excursions and is always happy when he can be with his masters and mistresses.

History of the Spanish Water Dog

Also known as the Perros de Agua Español, the Spanish Water Dog was first mentioned in 1110. As the name certainly suggests, it has its origins in Spain. How he ended up there is not known for certain. It is often said that Turkish merchants introduced it together with Merino sheep. Other theories, on the other hand, call North Africa his actual homeland.

As its name suggests, the Spanish Water Dog loves to swim. But also long walks with his master or mistress as well as regular and varied play units ensure that he is happy and content. But to ensure that this is really the case, it should always be sufficiently challenged. Because it is a very intelligent four-legged friend who has a friendly and curious nature from the ground up. He is also initially open to new ideas. 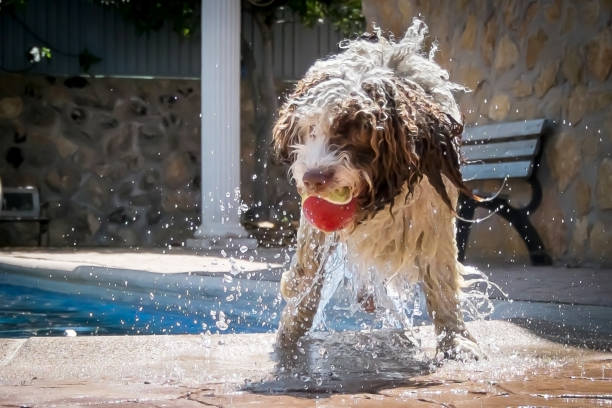 In addition, the dogs are very docile and therefore easy to train. For this reason, the Spanish Water Dog is also perfect as a member of a family with children, among other things. However, it should be noted that the animals have a lot of energy and therefore always have to be sufficiently exhausted. However, if they are given regular exercise and ample play sessions, they are very comfy couch dogs that demand their cuddles.

Before Spanish Water Dog puppies are bought, all measures should first be taken so that they can settle into their new home as best as possible. This includes, among other things, all-important utensils are provided, such as food and water bowls, toys, a sleeping basket, and of course a leash and food.

When buying, it is important to note that the little curly head will later be a real energy pack. Therefore, extensive walks should be planned several times a day. It is also very important that there is a garden in which the Spanish water dog puppy can let off steam from time to time.

He loves retrieving, and lunging and often likes to take part in so-called dog dancing. So it becomes clear that these are very active and versatile dogs. Some of these even have a certain hunting and herding instinct, which, however, is usually not very extreme. All of this is important to consider before purchasing a Spanish Water Dog.

As mentioned above, the Spanish Water Dog is very interested in new things and also very docile. As a result, the upbringing is usually very easy and pleasant. Even beginners get along very well with this breed and the time together quickly creates a very strong bond. As with any other dog, you should take a close look at how the animal behaves. If it has certain abnormalities, such as the herding and hunting instincts described above, going to a dog school is recommended. This makes living together much more pleasant and you don’t have to be careful that your dog runs away at every little noise in the forest.

If you always pay enough attention to the Spanish water dog and keep it busy, you will have a loyal companion at your side who loves being petted and spending time with his family.

How Do I Keep a Spanish Water Dog? 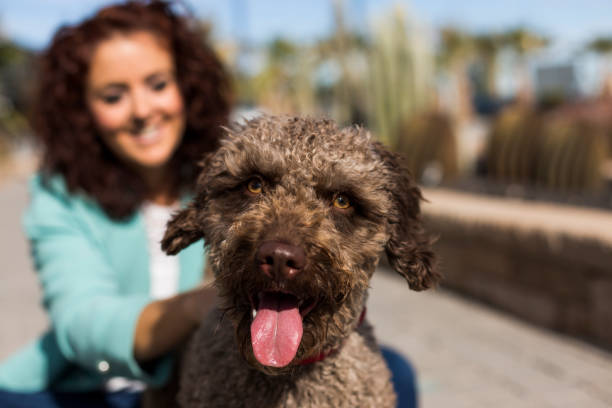 The Spanish Water Dog is very active and loves to exercise. Nevertheless, he should also be challenged mentally on a regular basis. For example, you can do certain games in which he has to track down fixed objects. Since he also likes to be in the water, this should also be a regular feature. For example, take your four-legged friend to a bathing lake at the weekend where dogs are allowed. In addition, it is also important to ensure that he always has enough space available in his usual environment. So you can keep the Spanish water dog in almost every house and also in larger apartments.

However, as mentioned above, it is always an advantage if a garden is available. Here the four-legged friend can absorb new smells and get some fresh air even when his people are away. Just like with many other breeds, however, the most important thing is that you keep busy with your animal and keep offering it new stimuli, such as new toys or new games in general. For example, the Spanish water dog loves to fetch. There are special frisbees that are suitable for dogs and provide lots of fun.

You can also go jogging or cycling with your Spanish Water Dog. So it becomes clear that he can be perfectly integrated into many everyday activities since he is not only fit, but also has a high level of intelligence.