Are you about to finally fulfill your dream of having a puppy? Congratulations. But what do you have to think about? The question often occupies you: When will the puppy be housebroken? How exactly do you get that? And when does that also work at night without a puddle of misfortune?

Contents hide
1 When Does Your Puppy Move In?
1.1 At What Age is Housebreaking Even Possible?
1.2 When will both transactions be reliably carried out outside?
2 How Important is it When There is Food?
3 How Do I Teach My Darling That He Should Loosen Himself Outside?

When Does Your Puppy Move In?

Of course, it is not unimportant how old your four-legged friend is when you adopt him. If it’s still a very young puppy, that’s good because you have the formative phase for yourself and can easily teach it a lot yourself. As a rule, puppies get to know their new homes at the age of 8 to 12 and at the latest after 15 weeks.

At What Age is Housebreaking Even Possible?

From the 3rd week of life, the animals follow the call of nature. This means that the puppies naturally follow their mother, smell her urine and follow her automatically. So, clean as dogs are, they leave their nest when they are 3 weeks old in order to do their business outside and not to soil their bed.

With our York-Russel mix living in the family, we took him in when he was 9 weeks old and within the first 4 days he definitely figured out what I wanted from him. 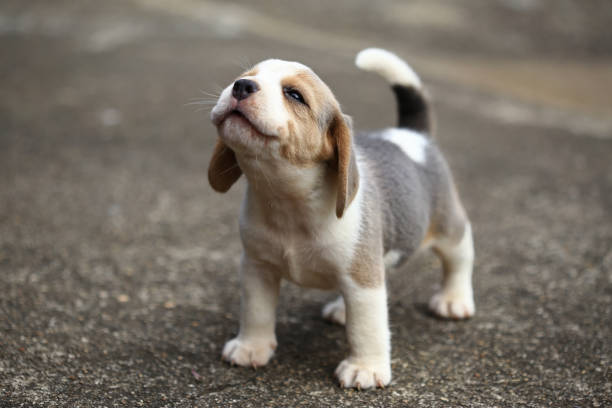 When will both transactions be reliably carried out outside?

Big business is more likely to get your darling outside. At first, you won’t be able to avoid a droplet spilling with joy and excitement.

I would go so far as to say that by 9-12 weeks a puppy should know what to do and where. It is logical that the time periods can only be gradually lengthened. No human can (and should) not ask a dog to stop for 12 hours. Dogs also vary enormously in their (mental and physical) growth, so it is normal for some puppies to be housebroken while others are still happily doing their business indoors.

But you have it in your own hands how long you play with him or her, for example. After the game, it should go straight out. You can draw these periods at any time. Many dog ​​owners set an alarm clock, even at night. But if the puppy is asleep at the time, it will make little sense. Each animal develops its own rhythm and each owner has its own method.

How Important is it When There is Food?

It is said that in general, a puppy should eat three times a day. At least! The stomach is still small and offers little space for puppy food. Of course, there are voices that rise and say: Outside, when there were no bowls and masters, the wolf had to kill his hare when he passed and not when the sun was in a certain position. After all, the food also had to be hunted and not put in a bowl because it was noon.

But pets aren’t wolves anymore. And especially when it comes to digestion, it may be extremely useful to know after how many hours the puppy that is to be housebroken has to do its job. After all, at the time when the wolf was still chasing his rabbit, the non-existent master didn’t have to go to work on time either.

In general, you should keep an eye on your puppy when there was food. Because it is logical: what goes in must come out again. Therefore, the question of whether it should be allowed to follow up or snack will answer itself.

How Do I Teach My Darling That He Should Loosen Himself Outside?

Did you pull your nose through your wet diaper as a child? Then you should also refrain from doing that with the puppy. Old, gruesome old wives’ tales should simply be dismissed as such. Your pup is inquisitive and smart. He quickly learns that when he feels grass, his buttocks should go down.

Watch your darling. Is he going in circles? Then he searches. From the very beginning, he won’t report, but this sign is unambiguous. Now you should be quick. At first, you can carry him to the door. If the way outside is very long, put a piece of newspaper there or take a look at the modern dog toilets. If even a droplet gets on the newspaper, a lot of praise is required. Very important: high voice, “fine!”, no matter how silly it looks to outsiders, it’s the greatest thing for your fur child!

Of course, the same applies, even more, when your four-legged friend does his business outside.
By the way, carrying your dog is not recommended to spoil him, but for two other reasons: On the one hand, many stairs are still a pretty big hurdle for the little man, especially since his pelvis is still quite soft and is still developing. It’s also quite unlikely that it will pull off your arm, which is more likely to happen if it takes too long to keep going.

Now it is the case that you take your puppy home with you. Here he cannot follow a maternal example, all smells are suddenly new. Hence the training with the newspaper and above all the great praise.

Should a mishap happen in your apartment, which will definitely be the case, refrain from scolding as much as possible? Because if you discover the puddle and start to complain, your little puppy won’t even know what to punish him for. You should also remove his urine smell quickly. Vinegar water should eliminate the mark. If something goes wrong, you shouldn’t do any magic for your dog. Great reactions in a positive sense only come with praise. In case of a mishap, you should swipe and not react further, there is no extra attention for that.

The rule of thumb is that for any new activity, you should take your furling outside and wait for his or her business. That means: after eating after the puppy has been alone, after playing… – in short: whenever something is over and something new is about to begin.