To design something means to create something directly. However, this should by no means be overstated, as the term designer cat refers exclusively to the outcrossing of a trait. If a miniature tiger roams through the vastness of the living room, then this is a Toyger cat. The playful cuddly tiger, therefore, does not come from a gene laboratory and is the result of a simple mating of phenotypically similar parent animals, i.e. cats with a similar appearance.

Siegfried and Roy’s white tigers are the best example of this. The color mutation of these animals is melanism found in many animal species. In nature, due to camouflage and survival strategy, they are certainly rare or no longer found at all, so the white tigers were then increasingly bred by humans. All tigers of this color variation found to date are the descendants of a single male tiger that was caught in India in 1951. The characteristic feature of the tiger, its striped pattern, also shows the Toyger cat. In contrast to the big cat, however, the Toyger is a small, playful velvet paw.

History and Origin of the Toyger Cat

The Toyger Kittens were created by American cat breeder Judy Sudgen. In the 1980s, they began to specifically breed cats whose phenotype resembles a tiger in terms of fur markings. This selection has been known since the 19th century as a result of the Augustinian monk Gregor Mendel’s attempts at crossing plants. The fur colors of domestic cats are all derived from the three primary colors: black, red, and white.

These colors come in either dense or thinned out. The color blue is therefore a dilution of the color black. The fur pattern of the cats, on the other hand, is determined by the tabby pattern and the point pattern. If the tabby pattern is masked by another gene, the cat will be solid. The interplay between color and drawing is best perceived through the ghost drawing. This is particularly well known in panthers, whose black color melanism allows the coat pattern or its markings to shimmer through.

The basis for Judy Sudgen’s breeding program was the Bengal male Millwood Rumpled Spotskin and a house cat named Scrapmetal. The Toyger cat has been officially recognized as a “Californian Toyger” as its own breed standard by the WCF (World Cat Federation) and TICA (The International Cat Association) since 2007. The name Toyger, on the other hand, is a combination of the terms: toy and tiger, i.e. a small toy tiger.

The Toyger cat is a very cuddly, lovable, and extremely playful creature. This cat was bred explicitly to be kept in the city or as an indoor cat. To get a better idea of ​​the Toyger character, it’s worth taking a look at the original parents. The Bengal cat is naturally:

The domestic cat, on the other hand, is very affectionate and affectionate, but also cuddly, cheeky, and moody. The pleasant nature of the Toyger cat can thus be summarized as follows:

The Toyger cat’s hunting instinct is no longer comparable to that of a wild cat or that of a tiger. The affectionate character and the beautiful appearance of the animals is a fascinating example of a pure house and apartment cat.

The Appearance of the Toyger Cat 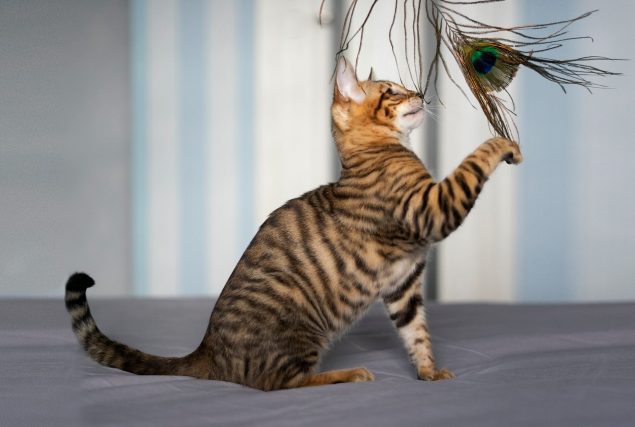 The appearance of the Toyger gives a direct indication of their origin. Even with the original parents, the domestic cat and the Bengal cat, it is noticeable that they also took a wild big cat as their role model. The Bengal cat is the result of a cross between an Asian leopard cat and the domestic cat. The coat pattern of the Toyger is particularly striking. This is a brown tabby pattern, the Brown Tabby Mackarel, which has a brown tabby appearance. The extremely hardy coat is short but still dense and soft.

The athletic and strong appearance of the cat weighing up to 5 kg or the male tomcat weighing up to 6 kg is rounded off by a broad chest and medium-length legs. The head resembles that of a domestic cat and has rather small ears with slightly rounded tips. Eye color varies between green and yellow. In summary, the following picture emerges: