Knowing and understanding their behavior is important to properly handle your chinchillas. Although chinchillas are very intelligent, they are difficult to train. Find out everything about the body and vocal language of chinchillas here.

Chinchillas have only been bred for a few decades and are still officially considered wild animals. Their needs and their behavior hardly differ from their free-living conspecifics. Chinchillas are still animals that only feel comfortable in a group and become active at dusk. Then you want to run, jump and crave variety. Chinchillas can smell and hear well. The long whiskers with which they explore their surroundings are also particularly helpful.

As a chinchilla owner, you must learn to understand how to interpret the behavior of your animals. Because only then can you understand them and notice immediately if something is wrong. If behavior changes suddenly, this can often be the first sign of an illness. Chinchillas express themselves on the one hand through physical and on the other hand through spoken language. 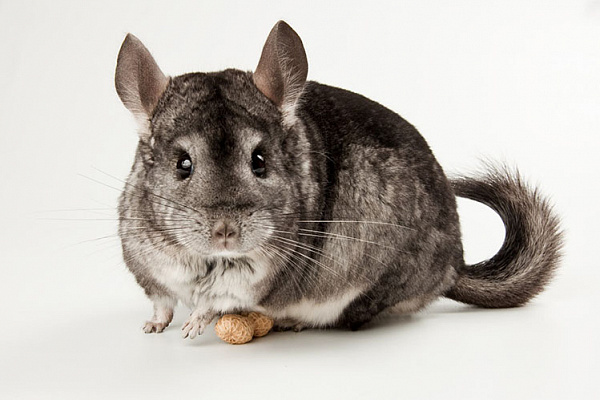 Their body language shows how chinchillas are feeling or what they want to say. It is therefore important to recognize the following behaviors:

The spoken language of chinchillas

Chinchillas can also use their sounds to communicate. First and foremost, spoken language is used for communication between animals, but humans can also understand how a chinchilla is feeling.

Cheeping: Young animals in particular “talk” a lot with soft, squeaking sounds. These sounds can also be heard in older animals.
Squeak: The female chinchilla uses bites to test whether her offspring are viable. Healthy babies respond to bites with loud squeaks. If they didn’t make that sound, the mother would kill them right away.
Squeaking: Older juveniles give their adult comrades a squeaking protest cry to let them know that they feel threatened. With that they say “please don’t harm me”.
Barking: The chinchilla expresses displeasure with a cough-like sound that sounds almost like a bark. Maybe it was angry with you or a fellow animal.
Grunts: A pair of chinchillas uses grunts to show their affection and togetherness.
Screaming: With a shrill scream, the chinchilla warns its conspecifics of impending danger. Unfamiliar noises, for example, can frighten a chinchilla into screaming in warning.
Can chinchillas be housetrained?
In the cage, chinchillas usually drop their droppings where they are. This does not mean that these animals are unclean. They are still very similar to their wild ancestors and find it difficult to control their “little business”. However, many chinchillas look for a specific corner of the cage for their urine.

Housebreaking a chinchilla outside of the cage is very difficult. It’s still worth a try. Place a litter box in a corner of the room where your pets are. Put in clean bedding and sprinkle some soiled bedding on top so your chinchillas will recognize the spot as a toilet. If you notice that one of your chinchillas needs a break, carefully pick it up and put it in the litter box. With a bit of luck, you’ve got the right nose and the chinchilla will do its business there. Give them plenty of praise and reward them with a treat. The chinchilla may go to the toilet on its own after a few days.

Don’t fret if your chinchillas don’t become housebroken. The small, dry droppings are easily sucked up, and urine is usually defecated in the cage. As a precaution, bring valuable carpets to safety.

Never yell at your chinchillas or slap them when something goes wrong. This only scares the animals, because they will not understand this “educational measure” as such.