Afghan hound – headstrong, proud and independent, which is particularly evident in his aloof, exotic facial expression. While he never calls for special affection, he is very sensitive and would perish quickly if neglected.

The Afghan Hound is headstrong, proud, and independent, which is particularly evident in its aloof, exotic facial expression. Although he never calls for special affection, he is very sensitive and would perish quickly if neglected. At times he exudes a certain apathy and was even said to be unreliable in the past.

Nevertheless, he shows his existing temperament and his lively nature, especially when playing. As a sighthound, he has a very strong, innate rush, making it almost impossible to let him run off-leash. Biking tours, dog races, and so-called coursing can be considered species-appropriate activities for the Afghan Hound. 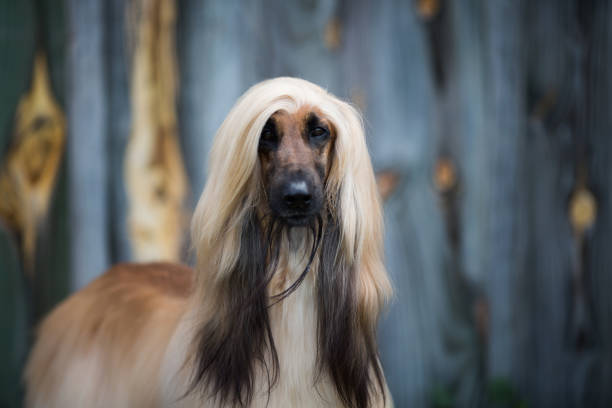 This form of greyhound racing satisfies the dog’s keen sense of hunting – it takes place on a firm track or imitates the swerving of a hare. On the other hand, a fashion breed with more than luxuriantly hairy greyhound specimens that have to struggle through exhibition marathons is less species-appropriate. A discipline from which mountain and steppe Afghans are allowed to live far away and which will hardly meet the needs of the animal.

Greyhounds hunt on sight. Due to their enormous speed and endurance, they are able to rush sighted games. Historically, greyhounds have also been used for hunting in the Afghan steppe and in the high mountains of the Hindu Kush in Central Asia. Adapted to their areas of application, the blows differ, for example, in their size, jumping ability, and the texture of their fur.

The Afghan hound developed this long hair in order to be able to optimally protect itself from the extreme cold of the Afghan mountains and the Middle East. Dogs similar in appearance to today’s Afghan Hound are said to have existed in this region for over 2,000 years before Christ.

As is often the case among scientists, opinions differ as to which appearance is ultimately closest to the origin of the breed. The Afghan, as it is known for short, has been bred in Europe since the late 19th century and is more of a steppe-flatland lineage.

The steppe Afghan has to put up with high temperatures; to this end, its fur is less densely hairy. Overall, this dog is lighter and faster than its mountain counterpart, which is exposed to severe cold, harsh winds, and wet conditions. On that terrain, speed plays a subordinate role – agility, strength, and jumping ability offer advantages to a mountain Afghan. The steppe Afghan, on the other hand, scores with its speed potential.

The long and silky coat, the narrow head with a weak to no stop, the body proportions, and the hanging ears – all make this dog breed unmistakable in its appearance. With a height at the withers of 68 to 74 centimeters, the males correspond to the FCI standard 228, which is managed under the patronage of the United Kingdom. 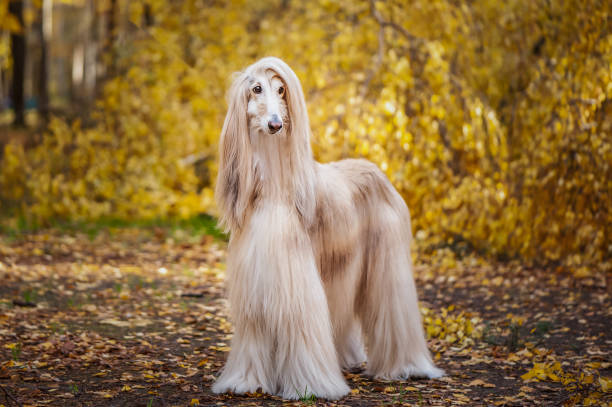 For bitches that are about 5 centimeters smaller, a weight of 20 to 30 kilograms is also desired. The standard does not restrict coat colors and allows them from silver-grey to red to golden yellow, with and without a mask.

The commitment to grooming is consistently greater than that of an “average dog”. Training as a groomer or dog hairdresser is not required to be able to care for an Afghan Hound in a species-appropriate manner. However, the time it takes to do this may surprise a beginner Afghan Hound. Daily brushing is to be set as a minimum, this counteracts the tendency of the coat to become matted.

Regular bathing is also recommended to keep bugs at bay. At the latest when the extraordinary dog ​​is going to exhibitions, people who have a lot of free time are in demand. The time that must also be available for the Afghan Hound’s urge to move and for training. Dog beginners can quickly find themselves overwhelmed by the energy, the hunting instinct, and the independence of the animal, which is valued as a treasure in Afghanistan.

It is a dog for lovers who can train with patience and perseverance – without sacrificing kindness towards the loving and proud dog. As little as barking, inconspicuous and calm is the greyhound-typical appearance in the house, the same dog can be experienced outdoors as impetuous, demanding, and oriented towards hunting.