The Azawakh is a distinctly original sighthound whose roots can be found in Mali, Africa.

The Azawakh valley of the same name forms the center of origin of its habitat and is part of the Malian national territory as well as the desert state of Niger.

Nomadic desert peoples like Fulbe and Tuareg live in close contact in a tent with these dogs. According to the opinion of cynologists, they represent the result of breeding efforts over many centuries, without cross-breeding playing a significant role.

European breeding begins around 1970. In Switzerland, Germany, and the former Yugoslavia, among other places, there is an efficient rearing. The beginnings of the breed, which was recognized by the FCI in 1980, turned out to be difficult. Leaving these impressive animals to others is not in the best interest of their owners on the sub-Mediterranean continent. In the barren and hot Sahel states, these four-legged friends are symbols of prosperity and hunting aids alike. 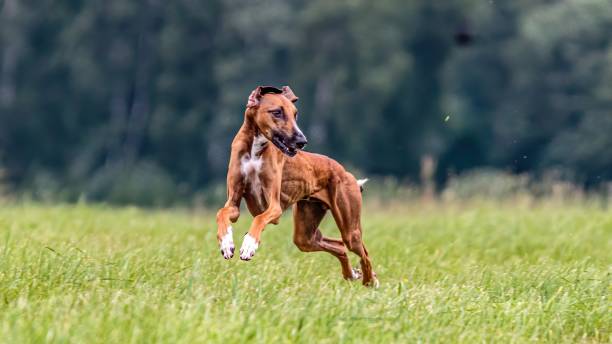 They protect the nomads’ camels and herds from predators such as jackals and hyenas. When humans and Azawakh hunt together, it is the assistant’s job to injure the prey in such a way that it cannot run away and only die with the hunter’s final death blow. The Azawakh combines speed, endurance, and courage. The Tuareg prefer to compare their greyhounds to Arabian horses.

The strongest male is good enough for their breeding, and a female joins them while more puppies are killed. The bone structure that can be seen on the Azawakh’s body and the clearly visible muscle parts already indicate the living conditions of the animal and the nomads.

Meager food, hardly any water, and an enormous effort to procure food determine their everyday life. The FCI standard number 307 expressly declares the recognizability of the bones and muscles under the thin skin as a desirable breeding trait.

The greyhound breed reaches a shoulder height of between 60 and a maximum of 73 centimeters and weighs 17 to a maximum of 25 kilograms. The prudent Azawakh owner understands his animal’s tendency to easily gain a few extra pounds on its ribs. Discipline in the allocation of feed is indicated. Sandy white, yellow, red, and brown color nuances make up the color spectrum of the fur.

The Tuareg nomads consider white markings to increase their value. Hardly a hair sprouts on the dog’s belly. The rest of the body wears it thin and short, it is velvety soft. Some undercoat protects in winter. The ascetic-looking four-legged friend’s preference for warmth and sun corresponds to its origin. As expected, the coat requires little maintenance.

The recurring brushing fulfills this purpose and, because of its social character, is also valuable for the bond with the Azawakh.

Their owners, the mysterious Tuareg nomads of the southern Sahara, see dogs without white markings as worthless. In addition, the nomads demanded that their dogs have black nails and black pigmentation on the eyelids around the large, dark eyes. In addition, there are five other mandatory features of the head shape. In 1980 the FCI recognized the Azawakh as an independent breed. It is considered to be one of the purest breeds of greyhounds as it was never crossed by the Tuareg tribes. In addition, it was never sold outside the Azawakh Valley and the Oullimid Tuareg territories of modern-day Mali, Upper Volta, Nigeria, and Mauritania. When dealing with people the African athlete knows, he is gentle, kind, and loving. He needs close contact with his owner and the human pack. Strangers are eyed with reserve, just as the territorial Azawakh would treat newcomers near the nomadic camp. He is used to acting independently.

His intelligence and sensitivity allow him to exercise restraint in unfamiliar situations. If he sees his territory, which can be the house, the car, or the property, he will make it clear that intruders are undesirable.

The German term “Windhound” is certainly particularly appropriate for these real “hounds of the desert wind”. Her followers describe her as “fast-footed enough to catch gazelles, hares and the European muflon (wild sheep), brave enough to fend off even large predators, enduring as a camel, as beautiful as an Arabian horse”.

In addition to their beauty, the Tuaregs love them as a symbol of high culture and prosperity. Although they still defend their owners’ goats and camels against jackals, hyenas, and wild dogs in their homeland today, their true value lies in hunting.

The Azawakh does not kill its prey, only seriously injuring them, as dead animals would spoil very quickly in the scorching sun. That is why the Tuareg hunter does not use a rifle or a bow and arrow for hunting.

He is handed an Azawakh and a knife. The nomads also use the Azawakh for hawking with the falcon. The puppies are trained from birth to hunt and are fed exclusively milk, never meat.

They receive this “diet” throughout their lives. When the young animals are three months old, they are prepared for their future work, first on rats and then on rabbits. When the dog grows up, its owner takes it on horseback to hunt the gazelle.