Occasionally he is also referred to as “Japanese Akita” or “Shishi Inu”, which means something like a big dog.

The names Akita Inu, Akita Ken, and Japanese Akita refer to the same breed of dog – the Akita. The suffixes “Inu” and “Ken” stand for “dog” in Japanese. Today they are no longer attached to the name of the FCI standard with the number 255.

It is claimed that Akita-like dogs can be traced back 5000 years. Such dogs were the companions of the samurai and have had a permanent place in Japanese mythology ever since. Pictures with Akitas are still given as lucky charms today. What is certain is that the Akita’s ancestors were dogs from the polar regions, from where centuries ago a spearhead group reached the northern mountains of the island of Honshu.

The Japanese administrative district of Akita in the north of the island of Honshu is considered to be eponymous of the Akita. The Japanese four-legged friend shares a history with the American Akita, although the two breeds have only been kept independently since 1999. Prior to this, clay grave goods and depictions on bronze bells point to a centuries-long history of the Japanese national dog.

Purebred Akitas are a status symbol in Japan. The esteem for this breed is expressed in the export ban of such dogs, which lasts until 1945, as well as in a declaration by Emperor Hirohito. In 1931, he gave the big four-legged friend the status of a natural monument. 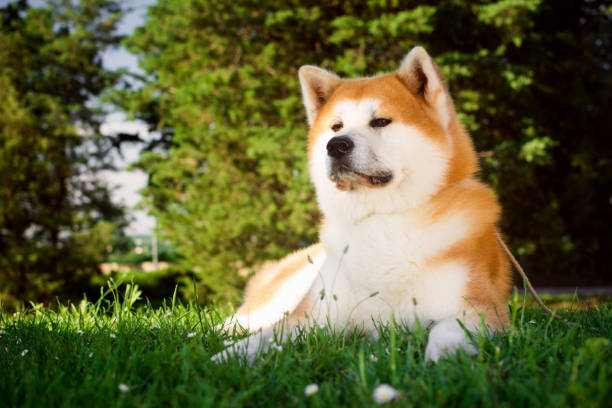 Although the individual breeds differ in size, color, use, and history of origin, they are so similar to each other that they are shown at exhibitions in Japan in a class that is divided into three subgroups:

The nature of these dogs is characterized by deliberation, calmness, and a lot of dignity. In Akita Prefecture, the largest and strongest specimens were sorted out and bred to today’s type. The Akita Inu breed was probably fully established 300 years ago. Although originally bred to pull loads and hunt big game, for many centuries it was primarily known as a fighting dog, with dogfighting being as popular in Japan as it was in Europe, for example.

When this so-called “sport” lost more and more followers over time and the Japanese emperor finally declared it banned in 1926, the Akita Inu was reinstated to its actual task of hunting red deer, wild boar, and bears. In the late 19th century, when the Japanese policy of isolation continued to recede, more and more foreign dog breeds inevitably came into the country and the various breeds naturally mixed.

Fearing the loss of the native breeds, the Japanese government established a Society for the Conservation of Japanese Dogs. Thus, all “native” dogs were declared a national cultural heritage. Since 1931, the best Akitas have officially been considered Japanese cultural assets.

A quote says: “The character of these dogs reflects the ancient Japanese people – earnest, watchful, loyal, good-natured and friendly, especially affectionate and sensitive to the kindness of their masters”. In its homeland, the Akita Inu is mainly used as a police and guard dog, but it has also won a top position as a loyal family dog, not only in Japan but in many other countries.

The Akita Inu “Hachi” is legendary in Japan, they appeared every day at the busy Shibuya train station in Tokyo to pick up their master from work. Even after he died, the dog continued to appear at the train station every day for 10 years, waiting for his owner to return. The Japanese were so touched by this story that in the 1920s they erected a huge statue of this Akita on the spot.

She goes by the name “Chicken Hachi-Ko”, which means “loyal dog Hachi”. The character of the Akita Inu is described as intelligent and calm. This strong and robust dog has a strong hunting and protective instinct. Because of this and because of his great stubbornness, he is not always easy to lead. He also tends to fight with other dogs, reacts aggressively to other animals, and tries to defend his territory against all intruders, whether human or animal.

His stubbornness makes a tough upbringing impossible because he absolutely won’t let himself be forced. But once you have made it clear what you want from him, he is relatively easy to train and likes to work with people. In addition, he is understanding, affectionate and loyal, which makes him an excellent and loving housemate.

Character traits such as dignity and restraint are attributed to the Japanese mentality. They are equally strong in the character of the Akita. In addition, the loyalty of this dog breed is written as almost unconditional. To be felt movingly and harmoniously in the remake of “Hachiko – A Wonderful Friendship”.

Richard Gere stars in the film, starring alongside three Akita dogs as his faithful four-legged companion. 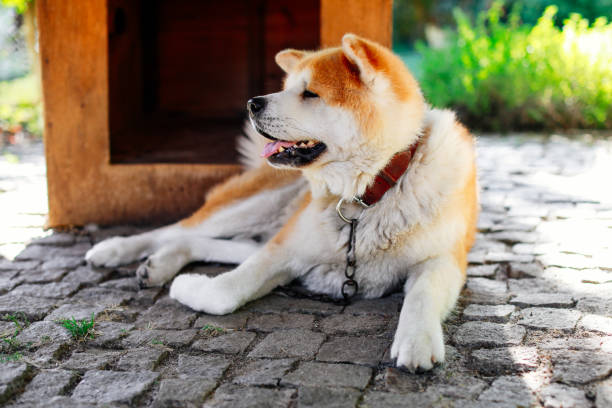 The Japanese Akita type reaches a height of up to 70 centimeters at the withers, the bitches remain about a tenth less. The breed historically follows a northern type of dog that was large, long-haired, and white-coated in early Japan. Their current appearance is almost unmistakable.

The four-legged friend, weighing 30 to 45 kilograms, carries its ringed tail over its back, which is typical of the breed. The broad forehead and the small, triangular ears that are upright and tilted forward are also striking. Equally striking is the very attractive coat of hard, straight, and slightly sticking-up topcoat with a dense, soft undercoat.

Akitas come in both white coat colors and a combination of red and fawn hair, with and without black tips. There are also brindle varieties. They all have almost white hair on different parts of their bodies in common – of course, this feature does not exist in white Akitas.