The Bloodhound, better known as Bloodhound in the English-speaking world, belongs to the FCI group 6 of the scent hounds and has its origin in Belgium.

Contents hide
1 Characteristics
1.1 The bloodhound is one of the oldest and purest hound breeds.
2 Nature and Character of the Bloodhound

There it is also known as “Chien de St. Hubert” or “St. Hubert Hound” or, in German, “St. Hubertus dog”. In no way does it owe its name “bloodhound” to any bloodthirstiness that one might suspect in a dog used for hunting. Rather, it is assumed that either the special purity of this breed, i.e. its “pure blood”, or its extremely strong sense of smell, which enabled it to hunt wounded, i.e. “bleeding” game even after a long time and over very large distances to scent who were the godfathers when it came to finding the name.

The breed’s strong connection with the so-called “blue blood”, i.e. the nobility, who spent a lot of time hunting at the time, could also have been an explanation for the name “bloodhound”. The desired size for males is 63-69 cm, for bitches the shoulder height should be between 58-63 cm.

The weight is ideally between 36 – and 50 kg. The dense fur is short, thick, and hard on the body, but somewhat finer and softer on the skull and ears. Coat color can vary from black to tan, tanto the liver, and red, with white markings on the chest, paws, and tip of the tail being acceptable. 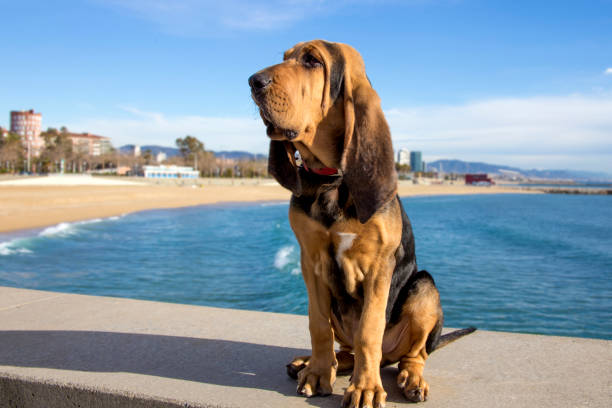 Another external feature of this large, powerful dog is the dewlap, which is a pronounced wrinkled overlap of skin below the throat. The heavy creases on the sides of the head and forehead, as well as the drooping lips and scissor bite (the upper jaw protrudes over the lower jaw), give the Bloodhound a distinctive facial expression, which most people would see as sad or melancholy.

The sometimes quite difficult-to-understand standard in today’s breeding of pedigree dogs still requires the pronounced wrinkles on the face and the drooping eyelids, which unfortunately often results in inflammation of the eyes.

The bloodhound is one of the oldest and purest hound breeds.

As early as the 8th century, it was mentioned that the patron saint of hunting, Saint Hubertus, was accompanied by a large pack of hounds in the forests of the Ardennes in Belgium.

Their ancestors were black Ardennes hounds of the old Segusios type, which can be traced back directly to the monastery of St. Hubert. Through selective breeding, the now-extinct St. Hubertus dog, which in itself was already an excellent and persistent bloodhound with an excellent sense of smell, was refined over the centuries into today’s modern bloodhound.

But the St. Hubertus dog was also frequently crossed in with the breeding of many other European scent hounds. When the Normans conquered England under William the Conqueror in 1066, the St. Hubertus dog, which had meanwhile become the favorite dog of the French kings, naturally also made its way to the British Isles.

There he played a significant role in breeding foxhounds. After further crossings with Talbot and southern dog breeds, the first specimens received the name “Bloodhound”, which is still valid today, although to this day in Belgium and in many non-English-speaking nations the name of its extinct ancestor “Chien de St. Hubert” is still used. used for one and the same dog.

In the meantime, the bloodhound has not only found many fans in its homeland but also in the rest of the world. His excellent reputation as a sniffer dog has also given him another field of activity in criminology in addition to hunting. It is able to follow even tracks that are already cold, which according to documented reports could sometimes be more than 100 hours old, over almost unbelievable distances of more than 200 km.

A dog is said to have even managed to catch 23 prisoners trying to escape in just a day and a half. Unfortunately, his popularity, which is certainly due in particular to these extraordinary abilities, has far too often led to a false image of the bloodhound in sensational gangster films and in crime fiction. Despite its very “special” appearance, it is not a terrifying monster that follows its victims through forests and meadows with its mouth wide open, only to then bark menacingly loudly or even attack them. 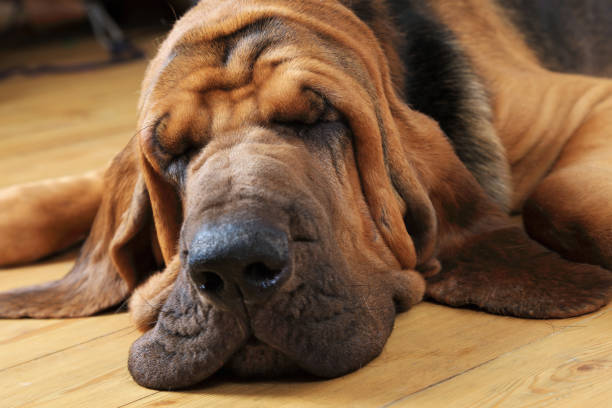 On the contrary, he is a pronounced snooper who follows his scent silently and whose hunting instinct is extinguished immediately after finding his prey, so he very likely tries to lick those he is chasing rather friendly than bite into them. For this reason, the bloodhound is often used nowadays when searching for runaway children or lost hikers, especially since this breed’s sense of smell is said to be twice as good as that of “normal” dogs, namely two million times better than the human nose.

Nature and Character of the Bloodhound

The character of the bloodhound is of a calm, friendly nature. His reserved nature, his pronounced loyalty, and his trusting nature towards children make him a suitable family dog. However, one should bear in mind that due to its size, it has a significant need for food and, in addition to sufficient living space, it also needs a lot of exercises.

As they were bred to work independently, it is to be expected that as soon as they sense anything of interest to them, they will rush down the trail with vigor and, despite a strong admonition from their owner, will keep their noses off the ground raise until they have tracked down the supposed prey. Due to their innate instinct to follow scents, their sense of obedience is not particularly strong.

Intensive and patient training, if possible on a demarcated area, is therefore essential. For your own safety, you should never let him off the leash, otherwise, his idiosyncratic and sometimes a little stubborn nature could cause one or two unpleasant surprises.