The Bouviers des Flandres, also known in this country as the Flanders Cattle Dog, belongs to the FCI group 7 of herding and cattle dogs.

Since both Belgium and France claim to have bred the Bouviers des Flandres as the country of origin, the FCI has accepted both countries as the origin. The name Bouvier des Flandres means something like “Flemish ox herder or driver”. The shoulder height of this breed should be between 59 and 68 cm, the weight should be 27 to 40 kg.

A variety of different theories exist about the lineage of the compact-looking Bouvier des Flandres. It is undisputed that people in the French and Belgian parts of Flanders lived together with the Bouvier-like peasant dogs several hundred years ago. In addition, mastiffs Spanish conquerors are very similar in type. A derivation of his name from “Boeuf”, meaning “cattle” and “ox” is obvious due to the use of the helper. 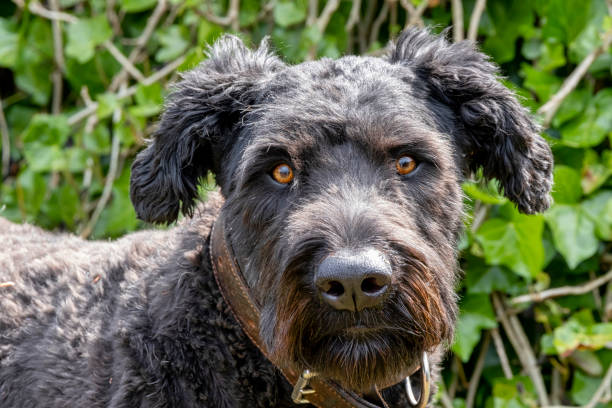 There is no consensus on the exact origin of the Bouvier des Flandres. What is certain is that in 19th-century Belgium, all dogs working with livestock were referred to as bouviers (steerers of oxen). These dogs are descended from very old, rough-haired working dogs and are valued as driver and guard dogs to this day.

At that time, dogs were used to herd cattle. They drive cattle and horses. In groups or alone, they pull small boats on the water from the shore. On land, they are carts laden with milk and cheese. Each region had its own type, the Bouvier des Flandres comes from Flanders, which stretches from the Dutch coast through Belgium to northern France.

Very little attention was paid to this shaggy, rough dog in terms of breeding, instead, he had to do his work under the toughest living conditions. When the cattle no longer had to be driven to the market with the advent of motorization, the number of these dogs steadily decreased, as they were expensive to maintain due to their size and the farmers were now able to save this money.

Nevertheless, the breed standard was created in 1912 and systematic breeding began. During the First World War, the Bouviers des Flandres gained a very good reputation for their courage and their work as medical and messenger dogs. Unfortunately, a very large part of the war’s fighting took place in Belgium and north-eastern France, so many Bouvier types became extinct.

It is thanks to Belgian army veterinarian Captain Darby that the Bouvier des Flandres was saved through the First World War. He was the owner of the valuable stud dog “Nic de Sittengem”, who has not only won numerous exhibitions but to which most modern pedigrees can be traced back.

In the 1920s, Flemish breeders tried very hard to rebuild the breed, which is said to have been crossed with the Berger Picard. In the 1970s, the Bouvier des Flandres came to Germany, where it quickly became very popular, especially with the Schutzhund sport. Nowadays, the Bouvier is increasingly used as a protection and military dog, but also as a guard and sniffer dog. He is also used as a guide dog for the blind.

In North America, the Bouvier takes part in Schutzhund and obedience tests very successfully, in Belgium and in the rest of the FCI area he has to pass a working test before he can win a beauty contest. You are able to work independently and are sometimes uncompromising.

For example, the four-legged friend simply jumps at a stubborn animal with great force and thus gets it on the desired path. In general, the big dog is extremely mobile, both mentally and physically, almost light-footed and agile. During the two world wars, Bouvier made a name for himself as an assistant in the military – taking on messenger, reporting, and rescue missions. Human and animal losses are high. 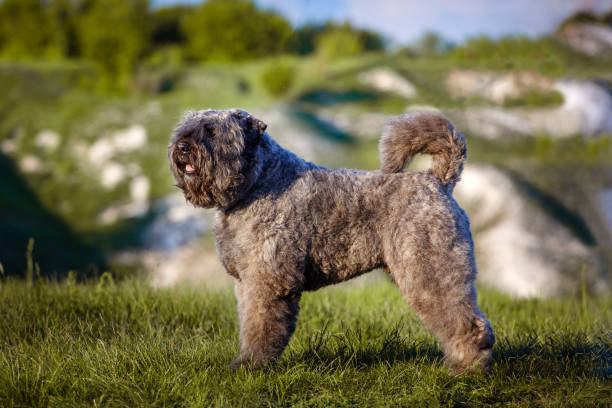 The breed remained almost extinct due to the later commitment of a few breeders. They lay the foundation for the FCI standard number 191 established in Belgium in 1922. It was recognized as universal in Belgium and France in 1965. With this standard, a fit and a robust dog are still shown today. Its use is always in the foreground, less the appearance.

Nevertheless, the coat of the Bouvier shows a clear functional orientation. It appears rough and disheveled on the short, stocky, and powerfully muscular body. Together with the dense undercoat, the topcoat, which is about six centimeters long, forms an impenetrable cover. Damp weather and even bites hardly affect it.

On very warm days, however, the dog’s performance is limited – he loves cool temperatures. The care of the protective coat is a little more complex than with other large dogs – however, to the delight of many owners of the breed, the animal does not shed. The hair of the head tolerates daily brushing. Depending on the dog’s outdoor use, the hair coat requires thorough combing once or twice a week.