On large, round, and flat paws, the Tibetan Terrier moves safely on impassable paths such as snow-covered terrain. This construction, which is as unusual as it is purposeful, allows the mountaineer to grasp and hold on with the help of flexible toes.

Equipped in this way by nature, he manages to climb almost effortlessly, he even overcomes deep snow areas without sinking into them. What could be regarded as long outdated breed characteristics for the four-legged friend, which has also been found in Germany since 1939, proves to be sensible and useful in the homeland of the Tibetan Terrier.

Here the animal needs a good footing for its original use as a herding dog and guard. The mountainous landscape of Tibet is extreme – geographically and meteorologically. Icy winds hit the residents and their animals there just as much as the dryness of hot, short summers.

A lush, double-layered coat protects the Tibetan Terrier from all adversities. It covers the strong and muscular companion with a fine, dense, and woolly undercoat along with a long topcoat. Straight or wavy, it has a structure similar to human hair.

The publication of the FCI standard number 209 lists the desired breed colors:

The coat needs a brush several times a week and the effort for grooming can then take some time. Grooming ends when the comb is no longer offered any resistance during the final careful combing. In this way, the hair retains its natural protective function, and any kind of weather bounces off the wearer. Its long coat of hair neither hangs down to the ground nor does it restrict the dog’s vision with the bangs falling over the eyes.

In their Tibetan homeland, the dogs, which measure between 35 and a good 40 centimeters at the withers and weigh eight to thirteen kilograms, are considered lucky charms. However, the name Tibetan Terrier may mislead the interested dog lover.

The terrier character traits are less important for the versatile dog than herding dog qualities. In the past, nomads with their herds, some wealthy Tibetans, or monastic residents gave a home to the highly valued dogs. As watchdogs and herding dogs, they are just as valuable as their fur, which when woven helps people retain heat.

The Tibetans remain at home in their area of ​​origin for umpteen generations, selling these dogs is out of the question. Today, Tibetan Terriers enrich families in various corners of the world. They are ideal companions for people who are sporty, who want to help other people, or simply enjoy the multi-faceted dogs. The multicolored companions want experienced dog owners who do justice to their nature and needs.

The Tibetan Terrier is considered docile and willing to learn. Nevertheless, like any other dog, he demands rules, otherwise, he sets the direction. Encourage clear announcements, to prevent sometimes transparent stubbornness and recurring phases of defiance. The males of the breed can sometimes live out a dominant streak in the encounter with conspecifics. Basically, however, the companion is tolerable and unfolds its liveliness and light-footed romping around in the game. 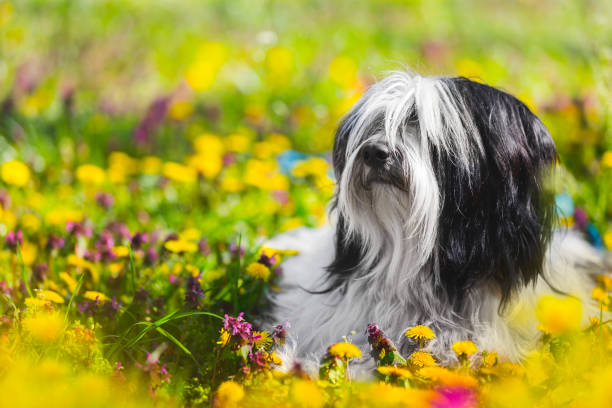 A frightened hare almost demands a nimble pursuit, swinging back and forth. With well-socialized dogs, it ends successfully with the retrieval by the owner.

Being bossed around is not for the Tibetan Terrier. This applies to adults as well as children of all ages. If the latter approach the four-legged friend with respect and friendliness, they quickly make friends with them. He pays cautious attention to strangers, checking them out to see if they are acceptable to the family pack.

Meanwhile, he does not show his alertness in an obtrusive manner and barking always has a legitimate reason. Long walks, playing, and romping around in the great outdoors counteract the dog’s tendency to become slightly overweight. Properly proportioned, it develops enormous bounce. Once his urge to move outside of the accommodation has been satisfied, he likes it quiet and settled in the house.

At the side of its owner, the Tibetan Terrier cuts a fine figure in agility, dog dancing, obedience, and hidden object games. Trained as a therapy visit dog, he infects people with his joie de vivre. The Tibetan Terrier has the distinctive character of Asian breeds. He’s a little aristocrat, full of pride and dignity and yet so sensitive. He can only develop if he is accepted as an equal partner. He does not know subservience.