Small but nice. With this sentence, the Boston Terrier is sufficiently explained. The American four-legged friend is the proud owner of the title “State Dog of Massachusetts”. When you look at it, it is less reminiscent of a lurid hunting dog than of a small mastiff, which despite its muscular body is an easy dog to train.

The Boston Terrier has a short history of origins, having only been bred from Bulldogs and White English Terriers (extinct) during the 19th century. As with many other dog breeds, dog owners at the time wanted to breed a strong, enduring dog that would then help them make quick money in fights.

Initially, the name “Boston Bulldog” was chosen because it was first presented at a show in Boston in 1878. Later, French bulldogs were also crossed in, and towards the end of the 19th century the American Kennel Club decided to permanently change the name to “Boston Terrier”.

Shipping to Europe only began in 1927. In this country, the euphoria was limited, and so the “American dwarf” found it difficult to establish itself. Only fascinated breeders maintained the European bloodline, which in retrospect should prove to be an advantage: today Boston is more popular than ever. In 2010 the number of puppies was 322 (compared to less than 100 in 2000).

Although it should belong to the terriers by its name, the American Kennel Club has classified it as a “companion and companion dog”. He has long since discarded his past as a fighting dog, and his thirst for blood has turned into endless curiosity. 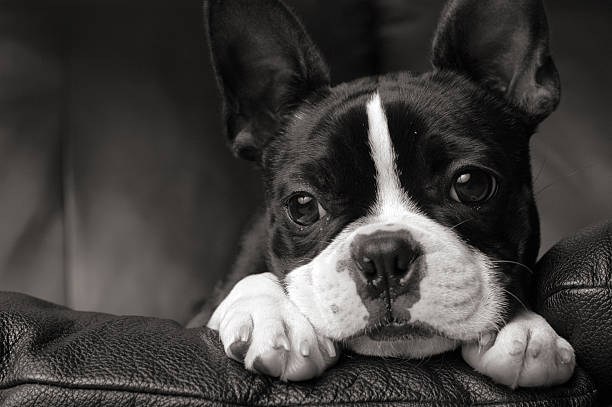 The Boston Terrier is a sociable four-legged friend that impresses with its charm, attentiveness, and above-average intelligence. It is not for nothing that connoisseurs and enthusiasts call the “American Gentleman”.

He always remains loyal to his family and makes parenting almost child’s play. He learns new tricks voluntarily because of his curiosity, little barking, and growling during walks. The little terrier proudly defends only its territory and its “pack”, which makes it the perfect family dog ​​(and companion for older people).

Similar to a French bulldog, he is suitable for playing and having fun with children indoors. Here, too, the younger members of the pack are looked after with patience and caution; The four-legged friend has at least as much fun as the little ones.

Like all terrier descendants, the Boston Terrier can be recognized for its robust physique. Dry muscles and a compact head testify to his fighting genes, which, however, have long ceased to have any effect. He also owes his short, soft, and shiny fur to his ancestors. The most common coloration is black and white, with darker tones usually predominating and white patches may be found on the head, neck, and chest.

There is no official measurement for shoulder height, but an average shoulder height of 40 cm is assumed. The Boston is available in three weight classes:

Characteristic is his penetrating gaze and the large, pricked ears, which have made him a fashionable dog to this day. Its square snout and large eyes complete the overall picture.

Size should not be underestimated, as what the Boston Terrier loses in size it makes up for in adaptability. Whether it’s a city or a country region, the proud American will find a place to be happy everywhere. This is due to his open-minded nature, which is why larger crowds are not a problem.

The Massachusetts State Dog wants to please its master and has an easygoing personality. This makes it the ideal dog for beginners and the inexperienced: mistakes in training are quickly forgiven and compensated for with intelligence. But this increased understanding can sometimes lead to self-confident stubbornness, which is quickly forgotten with a few strokes.

When it comes to daily excursions, the Boston Terrier can always keep up: it can handle short and long distances alike. Only his small nose prevents him from pursuing extreme sports activities. In most cases, dog dance and obedience are on the program.

He attaches particular importance to closeness and attention. This creates a strong bond with a particular caregiver, and because of this vulnerability, he is sometimes reserved and sensitive. Although he remains very devoted to his family, he is quick to make friends with strangers (and with children). Conspecifics are also sniffed in a friendly manner, and in the event of a dispute, it is able to defend itself nimbly. Normally you can expect playfulness and fun between the dogs at such a meeting. 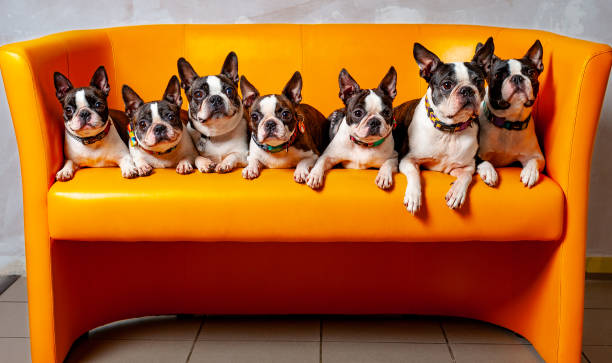 Because of the body size, the costs for feed and taxes remain within manageable limits. Only the teeth may need special care in some cases (as with many small-headed dogs). In this case, a dog toothbrush and dog toothpaste are advisable. A doctor should of course be consulted beforehand.

After the occasional massaging and glove brushing, Boston’s undemanding grooming can be considered done. However, because of its short fur and lack of an undercoat, the Boston is susceptible to the cold, which is why suitable clothing (e.g. a dog coat) must be attached in winter and on excursions. Just as care is the height of summer when extreme heat and dry air can weigh on the Boston. Here, a dog pool and shaded areas can provide the necessary cooling.

The little American scores in terms of intelligence and endurance. But even he does not defy every illness. Common (hereditary) diseases are luxating patella (kneecap injury), eye diseases, and spinal diseases. Since Boston is not related to any other dog breed, the number of possible diseases is limited to a few.

The American Boston Terrier is open, intelligent, and full of life. With its compact size and high adaptability, it can be used in many life situations and enrich the family in many aspects. Both beginners and dog professionals will love this little all-rounder because of his inquisitive look and loving nature.