Bullmastiff – These good-natured giants are (unfortunately far too) rarely seen. The Bullmastiff is a great family dog with a strong character, British roots, and a deterrent effect on strangers with questionable intentions.

Life as a gamekeeper was dangerous in the 19th century, especially in England. At least since poaching was punishable by death, poachers did not shy away from murdering game wardens to evade arrest.

In order to protect the life and limb of the gamekeepers, large hunting dogs were initially used. However, these primarily Irish wolfhounds usually injured the poacher life-threateningly or directly fatally, so the public execution intended as a deterrent often did not take place. To the annoyance of the landlords.

So people started looking for alternatives. A cross between a Mastiff and an English bulldog produced the most useful results for users. In addition, the dog’s sense of smell was increased by crossing the Bloodhound with it. The “Gamekeeper’s Night Dog”, as he was nicknamed, was born.

On the one hand, he understood perfectly how to silently stalk the poachers and then surprise and confront them. The Bullmastiffs always proceeded so skilfully that the thief was thrown to the ground but remained largely unharmed until the gamekeeper was able to arrest the criminal.

Natural breeding selection (either the dog died on the nocturnal rounds or got the upper hand) ultimately helped the Bullmastiff develop into an excellent guard dog.

However, its qualities and abilities were discovered in other areas and so today the Bullmastiff is not only considered a great family dog ​​with companion dog qualities, a good protective instinct, and a high stimulus threshold. He also makes a name for himself as a police dog with various authorities and is still a good sniffer and search dog. 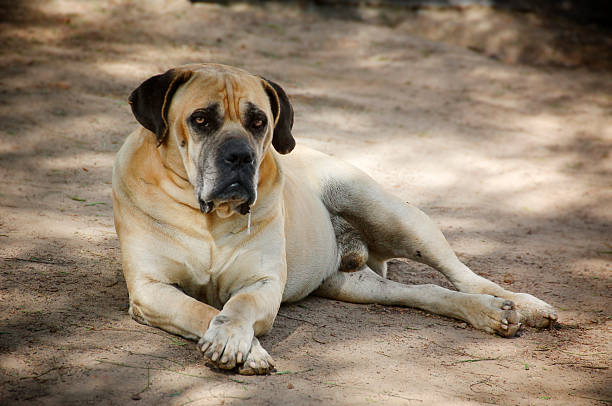 Today around 80-100 puppies are born in Germany whose breeders are affiliated with the VDH. The VDH is an association that is committed to maintaining the breed standard and only accepts breeders who are committed to the same goals.

Today the Bullmastiff is mainly used as a family and companion dog.

The Character & Nature of the Bullmastiff

From the ground up, the Bullmastiff impresses with its peaceful and friendly nature. He does not tend towards aggression and has a high stimulus threshold, which distinguishes him, particularly when dealing with his own pack.

Similar to the Dogue de Bordeaux, the Bullmastiff is a gentle Molosser who can ideally adapt to the family structure and is peaceful and patient with children.

The Bullmastiff is almost indifferent to strangers. At home, he is suitable as a guard or protection dog, which does not attract attention by barking loudly but is always able to defend the house and yard against dangers. On the way, it already protects its owners with its imposing appearance.

Chances are that a Bullmastiff will get along well with other dogs. Early socialization in the formative phase makes a significant contribution to the fact that later on in the dog meadow there will be a friendly togetherness.

The Bullmastiff is an easy-going, peaceful dog. If he already grows up with other animals, the chances are very good that there will be no problems in adulthood either.

The Bullmastiff is not a top athlete. Due to its moderately pronounced temperament, you can already create the basic prerequisite for a well-exercised dog with long walks. Because of his weight, you should treat his joints and ligaments gently and not ask him to exercise too much.

As a rule, the natural hunting instinct can be well managed, as it is only moderately developed in Bullmastiffs anyway. 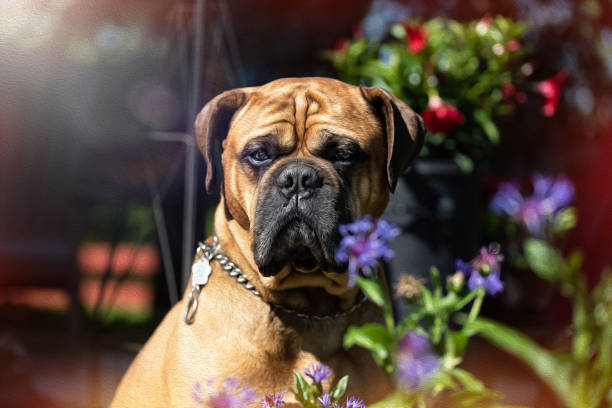 A Bullmastiff is a large, massive, and muscular-looking dog that can weigh up to 60 kilograms. Males reach a height at the withers of up to 69 cm, females are slightly smaller. Its fur is short, smooth, and weather-resistant. When the Bullmastiff’s interest is piqued, its forehead will wrinkle significantly. This is how they tell those around them that they have discovered something exciting or that their interest has been aroused.

The Bullmastiff has a fairly hardy, dense coat that requires little care. Weekly brushing and checking of ears, eyes, and paws are sufficient, but as a rule, he gratefully accepts increasing strokes with the hairbrush. He needs to be close to his family and is completely unsuitable for kennel accommodation. Bunk apartments are also not the best choice as the dog’s weight can cause bony problems if it has to move up and down the stairs multiple times a day.

As with any other dog, training the Bullmastiff should begin as a puppy. Early contact with the environment contributes to rapid socialization, which later makes it easier for the dog to live together with humans and animals. Future owners should also consider that the Bullmastiff is on the breed list in some federal states and consistent training helps to prepare the dog optimally for its character test. Anyone who wants to take a companion dog test with them should be patient. The Bullmastiff has a very peculiar stubbornness that can only be countered with consistency.