Despite its name, the Boston Terrier is a mastiff-like dog. Appropriate in his name is the reference to the city of Boston in Massachusetts/USA.

It is one of the few dog breeds that originated in the USA. It was originally bred for dog fighting, a so-called “sport” practiced in the Boston area in the 1800s, hence its current name.

The Irish pattern is firmly anchored in the color marking, i.e. the muzzle, forehead blaze, collar, fore chest, paws, and, if present, the tip of the tail are white. These badges are very important for exhibitions, the aim is to achieve the most accurate symmetry possible. The Boston Terrier’s fine coat is extremely easy to care for. The short muzzle and corkscrew tail is inherited from its Bulldog ancestors. 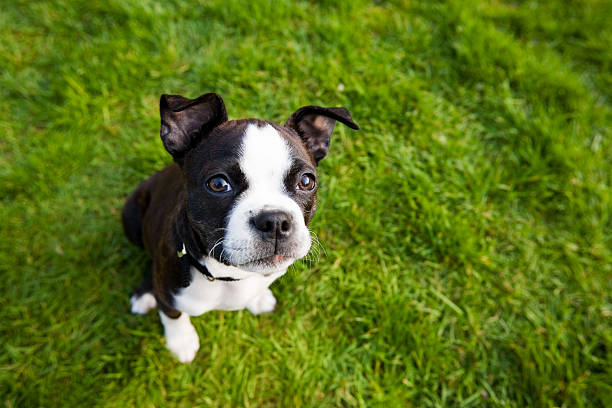 The appearance and nature of the Boston Terrier correspond perfectly: it is as balanced in temperament as it is in the physique. His ancestors inherited a happy mix of vivacity and kindness, cleverness and determination. His intelligence and sensitivity enable him to adapt anywhere. Treated correctly, i.e. lovingly and consistently, he is easy to train, yes, he likes to learn. He’s alert, but never a barker. He is confident, strong in his master and home, but kind to children and guests.

The Boston Terrier belongs to the brachycephalic dog breeds (short-headed, round-headed). This also includes other breeds such as the pug, Pekingese, or bulldog. This leads to various health problems, such as breathing problems, choking fits, and snoring noises. These dog breeds are sensitive to heat.

Watery eyes are a common problem in dogs with “googly eyes”. The risk of injury from protruding eyes also increases significantly.

The Boston Terrier has nothing of the aggressiveness of its ancestors. Despite this, he has remarkable self-confidence and, even today is still a scrapper enough to defend himself against dogs many times his own size. He is intelligent, lively, and very loyal. His adaptable nature makes him a good friend who is also excellent for obedience competitions. Especially for older people, it is a very good choice. This easy-to-train dog is always in a good mood and ready for fun.

He is very sensitive and reacts to the pitch of the voice. Although very alert, he is by no means a so-called barker. However, in an emergency, he will furiously defend his territory against strangers. Boston Terriers, who are more bulldog-type, are a little more settled, while the more terrier-type are more alert and always ready to play. Since he has the need to be constantly close to his owner, he is particularly recommended as a family dog.

The Boston Terrier is extremely easy to care for and requires little training. He’s a little powerhouse that oozes confidence and is a persistent runner. This lively little dog is very brave and not particularly demanding, making him an excellent companion dog who is also very affectionate. It’s hard to believe that these spirited little dogs were once tough fighters in the ring. Their breeders describe the Boston Terrier as very pleasant and always cheerful.

As a persistent companion dog (without a passion for hunting), he is able to go on long hikes, but is also satisfied with short city walks at a leisurely pace if necessary. The Boston Terrier is usually friendly and playful towards other dogs but is always ready to defend itself with strength and agility if necessary.

The Emergence of the Breed 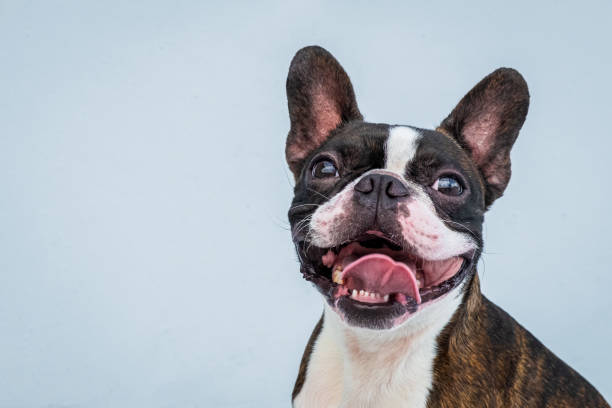 The Boston Terrier emerged towards the end of the 19th century from a cross between an English bulldog and the now-extinct white English terrier and was actually intended as a fighting dog.

However, the breed was later significantly modified through selective inbreeding and crossing with the French bulldog. The basis for breeding the Boston Terrier was the breeding pair “Hooper’s Judge” and “Burnett’s Gyp”, which in turn arose from mixtures of Pitbull, Boxer, Bull Terrier, French Bulldog, and the small English Bulldog.

In 1891, the American Bull Terrier Club of Boston applied for recognition of the breed, but the application was denied. It wasn’t until the supposedly offensive “Bull” was dropped from the name that the Boston Terrier Club of America was finally recognized in 1893. In the early years, the breed was still exhibited under the category “round-headed bulls and terriers of any color.”

However, once recognized, it didn’t take long for the “new” breed to gain a place among the most popular dogs, both as a show and companion dog. As early as the middle of the 20th century, the Boston Terrier reigned as the “American King” among American pedigree dogs and retained its place as number one on the list for many years.

However, he has since lost that top spot as a result of increasing problems with the birth of puppies but has retained his popularity as an extremely agreeable house dog with many enthusiastic supporters of the breed. The Boston Terrier also remains popular in the UK, Australia, and Canada, but not to the same extent as in the United States.