Human prejudices are like those fierce dogs that attack only the timid.” These words by the writer Isolde Kurz help to approach the English bull terrier with fewer prejudices and therefore more appropriately.

Unfortunately, just looking at the fighting dog ordinances of most of the interior ministries of the countries leaves little room for an unprejudiced consideration of the FCI breed standard no. 11.

Nature of the Bull Terrier

The Bull Terrier is very people-friendly by nature. They show endless patience with children. The prerequisite, however, is that the dog is trained extremely consistently from the start and socialized with people, other dogs, and pets at an early stage. Despite this, the Bull Terrier can be suspicious of strangers and even dangerously aggressive towards fellow dogs.

Since his pugnacity is very difficult to tame, the attitude of the breeder should be carefully checked when buying. This athletic dog not only needs sufficient exercise through play and walks, but also sufficient attention from its owner. Even the puppies are amazingly powerful and full of concentrated energy so that they can easily get out of hand in untrained or wrong hands. 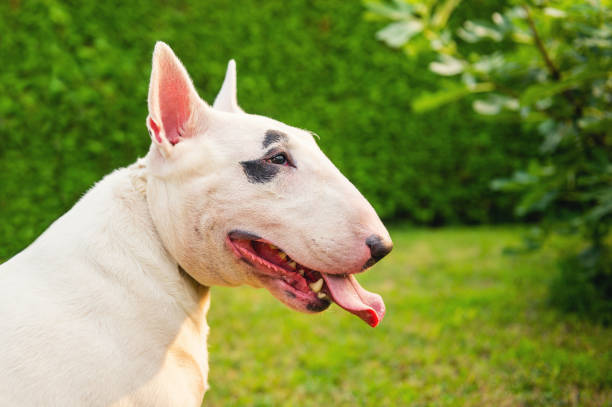 By nature, the Bull Terrier is a tough and fearless guard dog that must never be bullied. While he rarely attacks of his own accord, he ruthlessly defends what he believes has been entrusted to him. Although he actually has a frightening and wild appearance, his sometimes clown-like behavior has made him very popular not only in advertising and among cartoonists.

Even the famous American General Patton had his bull terrier “Willie” nearby during the Second World War, and one of the former presidents of this country, Theodore Roosevelt, also had a bull terrier accompany him on his walks.

He is a wonderful human-dog when properly raised and an exceptionally pleasant family pet who is confident and hardy yet sensitive. Even today he is still in competition with his peers, but no longer as a fighting dog in the pit, but as a show dog at exhibitions.

Bull Terriers play physically and this may be misjudged by other dogs. The dog is trusting towards people, extremely friendly, and downright affectionate. He seeks attention, including physical snuggling. Cuddling, he can relax well at the side of the family members. He shows a balanced and stable character early on; Child lover, animal lover, and charmer – a bull terrier is versatile.

He enlivens family life with his cheerfulness and open nature. His barking can be heard very rarely. There are two characters in his soul: the temperamental terrier and the bulldog vibe.

The animals and their owners have to live with the stigma of the “dangerous dog” from now on. When flirting with the bull terrier, the restrictions need to be assessed realistically and critically in advance.

Keeping, breeding, and importing the Bull Terrier is drastically more difficult or completely forbidden in many German federal states as well as in neighboring countries! And the forthcoming cohabitation can bring a lot of difficulties – a hysterical environment, problems finding housing, hostilities with and without the involvement of other dogs are examples of this.

Like any dog, an adult bull terrier can only fall back on 42 teeth. This applies to the dachshund (teckel) as well as to the “fighting dog” described here. And the bull terrier is roughly on par with the dachshund in terms of biting frequency in different statistics – only the image of the two dog breeds is fundamentally different. Biting a dog is an expression of fear of death – no dog will fight or kill per se unless it is indispensable for survival. 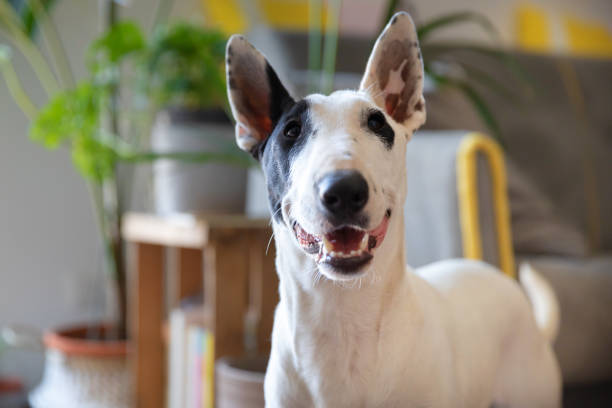 This is where the dog is buried: Bull Terriers were bred in early central England for dogfighting, in addition to their use as badger and rat hunters. Only the strongest survive this cruel spectacle, which was “normal” for the time and which today can no longer be tolerated in any way. The unity of dog owners and bull terriers is above average and a lot is demanded of the animal lover. Early and consistent training, reliable leadership, and forward-looking action are all part of this.

The history of the Bull Terrier began in the 18th century when people in England began to cross bulldogs with terriers to breed a “Bull and Terrier” fighting dog. The resulting offspring were then mixed with the Whippet and the English Toy Terrier to combine the strength and ferocity of one breed with the agility and speed of the other breed.

The breed is actually peaceful and willing to submit. For example, most accounts of famous old fighting dogs have said that these bull terriers avoided fighting outside of the pit whenever possible. It was once written that a confrontation with an aggressive street dog was very unlikely to be befitting of the dignity of a well-known champion, as he once turned tail and ran home after a challenge.

Another titleholder was reported to have lost patience with a pushy Pekingese and grabbed it and dropped it in a trash can. Such dogs were certainly not bred to be belligerent and aggressive, but solely to defend themselves and their families. This even earned the bull terrier the reputation of the “white cavalier”.