At first glance, Weimaraners look like well-trained hounds who will stop at nothing. In general, this impression is correct – the large dog with the shiny coat is an excellent hunter, bloodhound, and warden. On the other hand, the dogs are very clingy and suffer from excessive separation anxiety. We show you how to deal with a Weimaraner puppy so that it develops into a strong-willed dog.

The Weimaraner from Head to Tail: a Silver-Grey Hunter with Athletic Proportions

With the Weimarer males and females are clearly distinguishable from each other. Overall, males are slightly more powerfully built and have broader heads. They reach a height at the withers of 59 to 70 cm, bitches are slightly smaller at 57 to 65 cm. They weigh up to 40 kilograms, bitches usually no more than 35 kilograms. The one-colored fur with a typical silvery-grey coloring is very distinctive in the Weimaraner. Some dogs also sport greyish-blue eyes in adulthood, which gives the hunting dogs a special aura. Because of their impressive colors, the hunting dogs in the USA are mainly kept as companion dogs on large farms. They come in longhair and shorthair versions.

The Weimaraner from head to tail 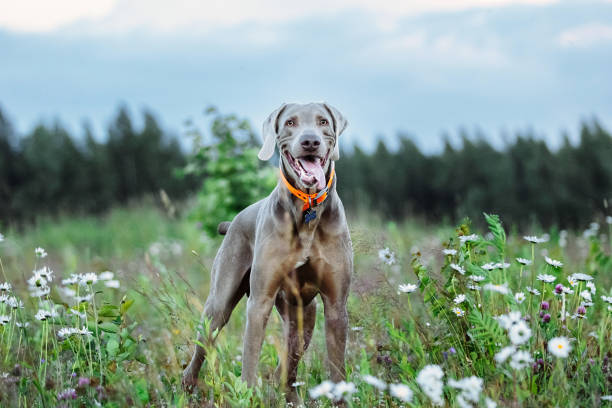 The special coat of fur of the Weimaraner

The coating structure of the Weimaraner is very striking. He wears a short, very dense topcoat without an undercoat. The fur is very smooth and the muscles are clearly visible. It grows a little longer on the ears and on the underside of the tail.

The dense fur of the longhair grows about 3 to 5 cm long all over the body; Neck, ears, belly, and chest may have slightly longer hair. The tail is velvety feathered, as are the backs of the legs. There is little or no undercoat under the fine topcoat, as is the case with short-haired Weimaraners.

Coat colors in the Weimaraner: Shades of Grey

The Brief History of the Weimaraner: A Chance for Diversity

Little is known about the emergence of the Weimaraner before it was deliberately bred at the court of Grand Duke Karl August of Saxe-Weimar-Eisenach in Weimar. In Thuringia, the gray dogs from Weimar have been kept as hunting dogs since the beginning of the 19th century. The breed was recognized as such in the 1890s and quickly gained worldwide fame for its exceptional coloring and razor-sharp hunting senses.

The difficult fate of the long-haired Weimaraner 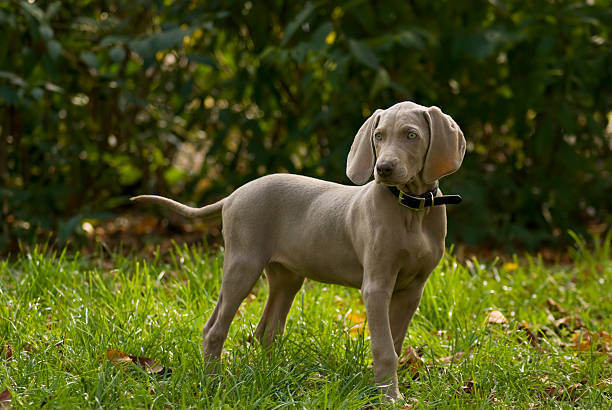 Up until the 1930s, long-haired Weimaraner puppies were being killed by most breeders as only the short-haired type was categorized as acceptable. Today both variations are bred. Weimaraners are still primarily used as working dogs for hunting.

Possible ancestors of the Weimaraner

Many cynologists draw links between the now-extinct Gris de Saint-Louis of France and the Weimaraner. Both breeds have a lot in common with Belgian Bloodhounds, and a relationship with the Great Dane cannot be ruled out. It is probable that the Weimaraner was created by crossing different hunting dog breeds from the European upper class and that appearance, in addition to sharpness when hunting, played an important role in the selection of the breed from an early stage.