Dobermann – The German dog breed Dobermann, recognized by the FCI, is considered an excellent guard and protection dog. It originated in Apolda near Thuringia and owes its name to its founder, Friedrich Louis Dobermann. To this day, he has not been able to completely shed the image of the sharp guard dog with cropped pricked ears and a mutilated tail, but today he is increasingly finding his place within the family. Because in addition to his unwavering instincts and his fearless courage, he can also present himself as extremely sensitive and very easy to train a model dog.

The Dobermann comes from the small town of Apolda in Thuringia. As the only German dog, Dobermann borrowed its name from its founder, Friederich Louis Dobermann (1834 – 1894). Dobermann, already known as a dog breeder and dog catcher, had the task of collecting stray dogs. If their owners reported in time, the dog could be returned; if the owner could not be found, the dogs were shot. Unfortunately, animal protection and animal laws did not exist during his lifetime.

However, Friedrich Dobermann did not shoot all the dogs. He uses the particularly alert animals for mating and breeding with his favorite bitch Schnuppe. Which breeds are actually the forerunners of today’s Doberman cannot be reconstructed with final certainty, but the butcher dog, which was frequently represented at the time (see also the Rottweiler breed portrait), as well as the German shepherd dogs, hunting dogs, Great Danes, Pinscher, Greyhounds, Weimaraners and Sighthounds.

Dobermann’s goal was to breed a particularly courageous guard and protection dog, which showed a pronounced aggressiveness, especially in the early days. It wasn’t long before the police discovered the dog breed and used the Doberman as a service dog. To this day, it is one of the ten service dog breeds used in Germany. But they were also often used for hunting and for guarding houses and farms due to their sharpness and fearlessness.

After Dobermann’s death, Otto Göller took over the breeding stock and continued breeding in the spirit of its inventor. With sometimes up to 150 breeding animals and pronounced business acumen, Göller made a significant contribution to making Apolda’s Schutzhund known and popular beyond the borders of Germany. 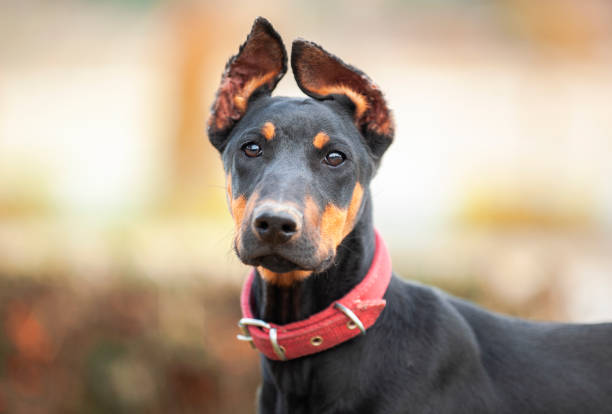 An inglorious capital was added in times of National Socialism. Like the German shepherd, the animals were used in World War I and World War II to guard concentration camps. They were also used in the German army as reporting, mine detection, and medical service dogs.

In the recent past, the Doberman has often had its ears and tail docked to add an extra edge to its appearance. The FCI reacted, albeit late, to this animal cruelty and changed the breed standard so that docking is now punished with breeding exclusion.

In addition to his duties for office and dignities, the breed continued to develop and is now often found in families as an excellent guard dog with a little less sharpness. Dobermans are considered to be one of the most intelligent dog breeds in the world and are excellent athletes who have made outstanding contributions in almost all dog sport disciplines.

Dobermans are among the most intelligent dogs in the world and are designated as working dogs. Their agility, their bright heads, and their strength make the breed one of the most versatile animals. Valued as a service dog for the police, customs, and army, as a therapy, rescue, and guide dog, and as an extreme athlete, e.g. in agility, obedience, tracking, or VPG sports. In addition, more and more frequently used as a family dogs. Thanks to his excellent guard and protection dog function, he guards homes and yards with bravura.

The Character & Essence of the Doberman

Anyone who deals with the character of the Doberman must know that the dogs are among the most intelligent of their kind. The bright minds want or need to be employed so that their nature can develop as desired. Equipped with lightning-fast comprehension and a high willingness to learn, it is a good idea to work actively with the dog. 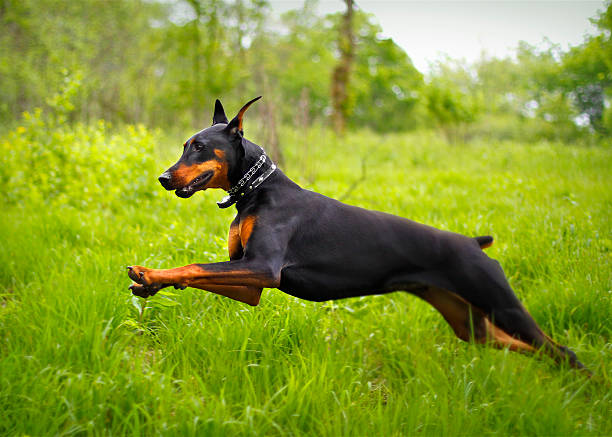 If he finds enough work and enjoys being close to his family, at home he is a fearless, cuddly, and loving fellow. However, these positive characteristics will only develop fully if the regular work with the dog, which has already been described many times, is carried out.

Even if the Doberman is no longer as aggressive and sharp as it was a few decades ago, fearless, brave, and ready to defend house and yard, as well as their own family, are values ​​that they always internalize and follow. The Doberman has a low to medium threshold.

With his family, Dobermann likes to let himself go and has become the darling of the whole family. Even children can have fun with the Dobermann. The prerequisite for this is that the small child is taught how to deal with the Doberman and the dog is socialized at an early age. As a rule, the Doberman becomes a lap dog in the family circle and is always up for a joke. Nevertheless, he should not be left unsupervised with children – because his sometimes low stimulus threshold can also cause him to pinch if you annoy him.

As a protection and guard dog, the Doberman will always be suspicious of strangers and will be particularly attentive. His innate skepticism will wear off once he finds his pack leader in control of the situation. Its territorial protective behavior requires that outsiders and strangers are informed of its presence in advance so that they do not unknowingly enter the property. Here the Doberman understands no joke.