The Irish Wolfhound is friendly and virtually perpetually devoted to its family. He is very reliable and intelligent and he likes long walks, bike rides, and horseback rides. He needs a lot of space to romp, preferably on a fenced property, and is not suitable for a cramped apartment due to his size alone. The Irish Wolfhound is very gentle and fond of children, quiet in the house, and needs close contact with the family. 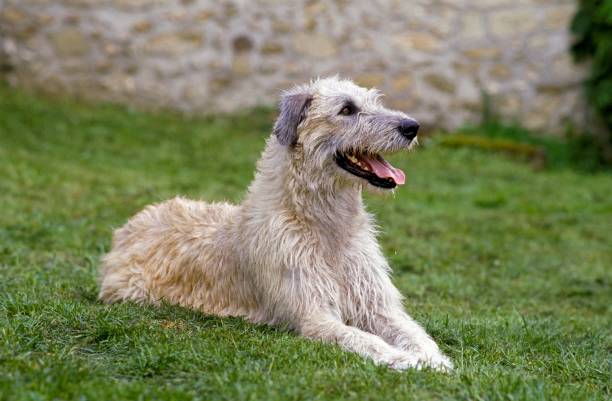 Although current owners race him in greyhound racing, he is not a track specialist. He is also less suitable as a guard dog. Unfortunately, the Irish Wolfhound has become a fad at the moment so it’s being marketed.

Keeping and rearing it is extremely complicated. Young dogs, for example, need excellent food and must not be overworked until their muscles and bone structure have matured. Since species-appropriate rearing is so expensive and time-consuming, as a buyer you should check the origin particularly critically and very carefully to make sure that the breeder is not only interested in profit and that you get a healthy dog.

Its enormous size, coupled with the very high cost of food, almost precludes the Irish Wolfhound from becoming a truly widespread family pet.

The Irish Wolfhound has a harsh, rough coat with particularly long and wiry hair above the eyes and below the jaw.

There are different coat colors allowed in this breed:

The rough coat is easy to care for and only requires occasional combing.

History of the Irish Wolfhound

The exact history of the origin of the Irish Wolfhound, like that of many other old breeds, is unfortunately unclear. However, it is agreed that very large greyhounds have been used in Ireland since recorded history. Some sources now assume that the “Cu”, an enormous, massive, shaggy-coated dog, is the ancestor of the Irish Wolfhound.

This breed was used by the local population to hunt moose, wild boar, and wolves. Another explanation for the origin of this breed would be that the Celts invaded Greece and conquered Greece in 295 BC. conquered Delphi.

There they may have acquired Afghan/Greyhound-type dogs, as they have been shown to prefer dogs of great speed and size. These dogs then accompanied the Celts on their campaign of conquest in Europe and may have been crossed with slender mastiffs before the Celts reached Ireland, the northernmost point of their migration.

Even the Romans, who conquered England in the first century AD, reported that huge dogs were used there to hunt wolves and elk. At that time, the Irish Wolfhound came in both smooth and rough coats, and in a wide range of light and dark colors.

A letter from the Roman consul Symmachus from the year 393 AD shows that these dogs must have had an enormous shape. In this letter, he thanked his brother Flavianus, who was stationed in England, for sending the seven Irish dogs and wrote that all of Rome had watched these dogs with amazement. Since by that time the people of Rome were already used to giant mastiffs fighting bears and lions in the arena, the dogs from Ireland must have been something really special.

In terms of appearance, they certainly still differed greatly, but their courage and loyalty as well as their strength and speed were already well known at that time. In the time of the Irish heroes between 200 B.C. A lot of tales and legends about the Irish Wolfhound arose between 200 BC and 200 AD. A well-known legend tells of the dog “Ailbhe”, who is said to have been so fast that he managed to circumnavigate the province of Leinster in one day. 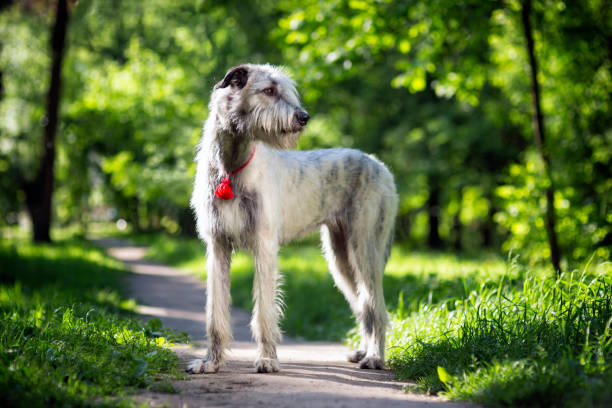 He is said to have defended the entire province and to have had enormous wisdom and supernatural intelligence. Another legend tells of King Cormac’s famous pack of dogs of Ireland, which was looked after by a certain Fionn McCumhaill, and of the pack’s best dog, “Bran”. This “Bran was particularly praised for her incredible speed, her bravery in fighting sows, and her ability to give Fionn and his men advance warning of enemy attacks”.

When a servant stole the pack to sell to England, the dogs were rescued by Fionn and his men. This story shows that these dogs were very valuable at that time and therefore a poor man could make a huge amount of money by selling them abroad.

In fact, 5th-century lore shows that the dogs and their breed were so lucrative that merchants sold shiploads of these animals to other countries. Since the vast majority of dogs exported were of the wolfhound type, the breed likely left its mark on the development of a great many European dog breeds.