For thousands of years, the Saluki has lived in its current form in the Near and Middle East, from China through Arabia to Egypt and the Sahara region. Depending on where it lives, it is sometimes more elegant, sometimes coarser in physique, and sometimes more or less heavily feathered on its legs, tail, and ears.

Also known as the Arabian Hound, Persian Greyhound, or Gazelle Hound, the Saluki belongs to the FCI group 9 of sighthounds. Its origin can be found in today’s Iran, where it is also known as “Tazi”. The name of this breed most likely goes back to the old and long-lost South Arabian city of Saluk. The Syrian city of Seleucia, which belonged to the then Greek Empire, may also be responsible for the name. The size desired by the breed standard is between 58 and 71 cm for males, females should be proportionally smaller.

At first glance, a Persian greyhound with the sonorous name Saluki consists mainly of its legs. Infinitely long, they carry a muscular and slender body. The dog, which is 58 to 71 centimeters tall and weighs 14 to 25 kilograms (females are proportionally smaller and lighter), is immediately recognizable as belonging to the group of running and greyhounds. 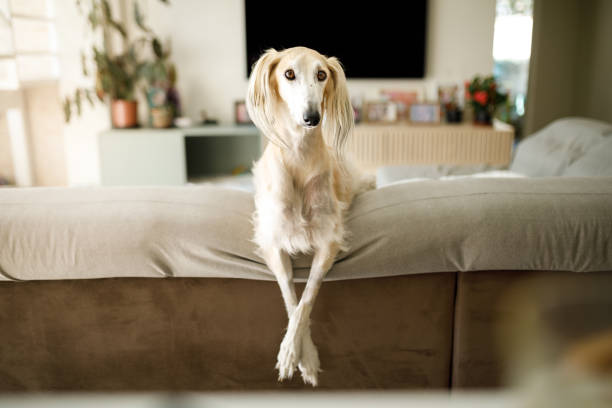 He seems almost waiting to chase after an artificial rabbit that is zigzagging and zigzagging in front of him. These dog breeds are bred for speed and dexterity. It is a very old breed and has its origins in the Near the Middle East.

Already 4200 BC B.C. Saluki-like dogs were depicted on Persian clay vessels. Egyptian pharaohs were seen hunting with a falcon in their arms and a Saluki on a leash. Mummified remains of a Saluki were also found in an Egyptian tomb.

Many nomadic peoples and desert sheiks between the Caspian Sea and the Sahara were hunted by Salukis for centuries. Hares, gazelles, foxes, wolves, and even ostriches were hunted either alone or together with the falcon.

Their speed and elegance were immortalized in poetry, for example, the poet Abu Nuwa wrote around 800 AD: “It is as if where the eyelids meet there are burning coals, glowing from within. As a hawk pounces on a hazel grouse, so he breaks through the shell of the earth with his four legs. He runs so fast! They don’t touch the ground at all while walking.”

The breeding of this breed, also known as “El Hor”, the noble ones, was an art that was always passed from father to son. The pedigrees were never written down, it was handed down exclusively from word of mouth over thousands of years.

The Saluki is even mentioned in the Koran, where it says: “The Saluki is not a dog, it is a gift from Allah, given for our benefit and pleasure”. A Muslim tradition was that you could never sell a Saluki. They could only be passed on as a valuable gift, as a return gift for a favor, or as a tribute to a person of higher rank. Thus, during the Crusades from the 11th to the 13th century, some Salukis came to Europe for the first time, where they were absorbed into the local races.

Other sources state that they only came to England in the 17th century together with Arabian horses. In any case, towards the end of the 19th century, the English Lady Florence Amherst also received some Salukis and made great efforts to achieve recognition of this breed in England. 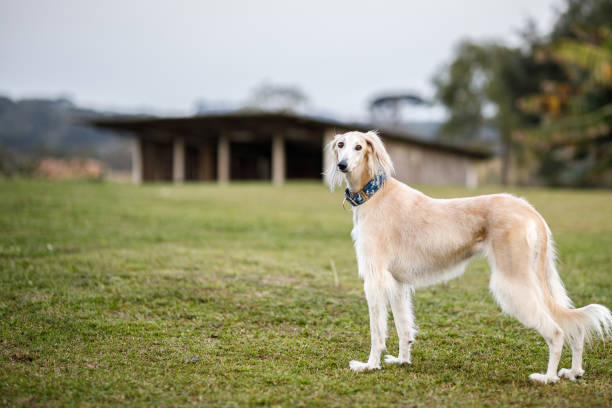 The Saluki has a smooth and silky coat that is soft and sensitive. A distinction is made between two Saluki types, the short-haired, sometimes called “Shami” and the feathered variant. The feathered bat has silky, thin fringes on the back of the legs and thighs, under the tail, and on the ears. Coat care is limited to regular combing, especially feathering.

The two soft and silky fur types do not differ in their color variations. Both strokes can be seen in white to cream, gold, red, red-brown as well as in black and many other color combinations. All varieties are allowed – brindle, tricolor, masked, and unmasked. The fur is generally very easy to care for and, apart from the feathering, relatively short. The long sections of fur require a little more effort. The Saluki’s coat change takes place to an inconspicuous extent.

The Saluqi, as it was called in Arabic and later simplified to Saluki, owes its reputation to its excellent hunting qualities. In cooperation with the hunter, he is responsible for catching the animals on sight and keeping them until the hunter kills them. Thus the baiting instinct is pronounced, but there is no killing instinct.