The Italian water dog Lagotto Romagnolo combines many qualities: Thanks to their weatherproof coat, dogs of the breed can do heavy work in freezing temperatures and are loyal playmates in the house. In Germany, there are two clubs that deal with breeding the breed and mediate puppies.

Contents hide
1 Distinguishing Features of the Woolly Retriever
1.1 Important characteristics according to the breed standard
1.2 Coat and colors: Dense ringlets are the distinguishing feature of the Lagotto Romagnolo
1.3 Permitted colors and color combinations
2 The Story of the Lagottos: Hunting Helpers in the Marshes of Italy
3 Care and Health: Not Exactly Easy to Care for, but Robust
3.1 Epilepsy
3.2 Storage disease
3.3 Progressive cerebellar abiotrophy
3.4 Fur care for the barking ball of wool

Distinguishing Features of the Woolly Retriever

The long-legged water dog is medium-sized and almost as long as it is tall, which makes it appear very robust. His woolly curly fur grows the same length all over his body and gives him his friendly Schnauzer face. For males, the FCI standard defines an ideal height of 46 cm, for breeding 43 to 48 cm are permissible. They weigh between 13 and 16 kg. Bitches ideally stand at 43 cm, with heights between 41 and 46 cm at the withers not being considered a fault. They weigh a maximum of 14 kg, but should not weigh less than 11 kg.

Important characteristics according to the breed standard 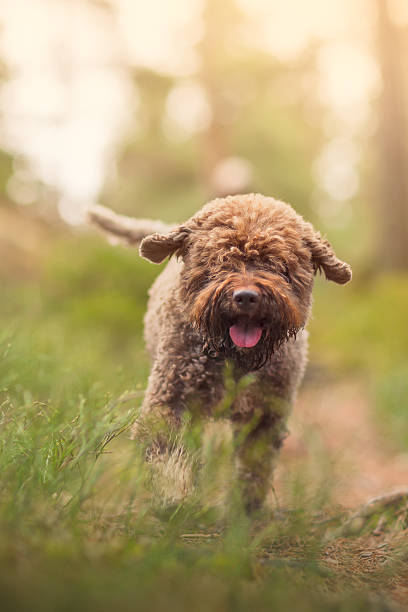 Coat and colors: Dense ringlets are the distinguishing feature of the Lagotto Romagnolo

The thin skin does not wrinkle all over the body and can be pigmented in any shade of brown. The dense woolly hair has to be shorn regularly, like sheep’s, so that it doesn’t grow too long and become knotted or form cords. The optimum hair length after shearing is 4 cm. The topcoat rolls up in fine curls so that the undercoat underneath becomes visible, which grows very densely and protects the dog even when working in ice-cold water. The curls only grow a little softer on the face and frame lips and eyebrows.

The Story of the Lagottos: Hunting Helpers in the Marshes of Italy

Small, curly water dogs were used to hunt birds at aristocratic courts as early as the 15th century. The so-called Vallaroli or Lagotti were hunters who hunted for coots and other waterfowl in the marshy areas of Italy, which were still common at the time. After the wetlands were drained, the Vallaroli turned their attention to truffle hunting, with the curly-haired Lagotto dogs again proving very useful and talented.

Care and Health: Not Exactly Easy to Care for, but Robust

The average life expectancy of the Lagotto Romagnolo is around 14 years. He can romp outside for hours in any weather and even swim in icy water. Its dense undercoat completely repels moisture and keeps it warm. Unfortunately, the breed is affected by various hereditary diseases that can be detected and avoided with genetic testing.

Hereditary epilepsy is very common in Lagotto Romagnolo. In some studies, up to 32 percent of dogs studied are affected. Affected puppies have their first seizures at an early age. 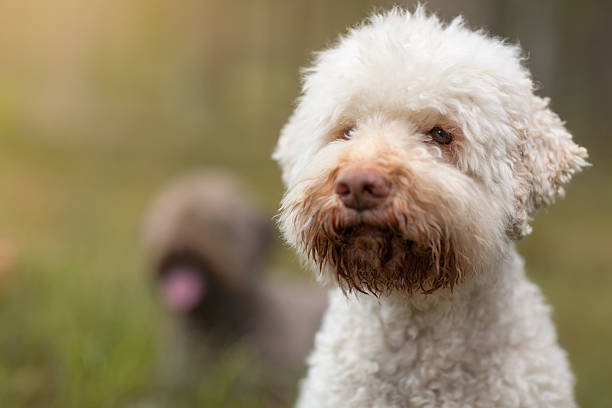 The so-called storage disease is a neurodegenerative hereditary disease that is progressive, i.e. it gets worse with age. The first symptoms appear between four months and four years of age. According to studies from 2013, up to 11 percent of the breed get the disease. Symptoms include uncontrolled movements of the eyes and limbs, which progressively limit movement.

Cerebellar abiotrophy (CA) is another neurological condition that affects a disproportionate number of Italian Water Dogs. The progressive death of Purkinje cells in the brain leads to balance disorders and motor deficits, which are already noticeable in puppyhood.

Fur care for the barking ball of wool

In order to keep the woolly hair supple and in length, it must be clipped regularly. Daily combing through the curls should be part of the routine for every holder. If the hair becomes too long or if unusual curls get stuck in the undercoat, knots and felt strands form. The Lagotto has an individual haircut and should not be styled like a poodle with a crown.