Leonberger – A dog of real beauty, like a lion. The family dog, whose breed originated in Leonberg, a town near Stuttgart, is slowly becoming the secret star of the dog world. His magnificent appearance and his loving nature are certainly not entirely innocent.

The beginnings and history of the Leonberger go back to the early 19th century. Heinrich Essig, councilor in Leonberg, is considered the father of the breed and started crossing different breeds around 1840. According to legend, it is assumed that he wanted to create as close an image as possible of the Leonberg heraldic animal, a lion. In order to achieve his goal, he initially mated a male St. Bernard with a female Newfoundland dog. Their offspring were allowed to mate with each other for several generations.

Essig brought in fresh blood in the course of his breeding efforts with another St. Bernard and by crossing a Pyrenean mountain dog. The birth of Leonberger. Esser himself is said to have written later that he designed the largest, long-haired dogs that, in addition to size, also combined intelligence and beauty. His first exhibition was extremely successful. Esser was able to win Empress Elisabeth and other blue-blooded horses for the breed and gave his Leonberger puppies the best care. 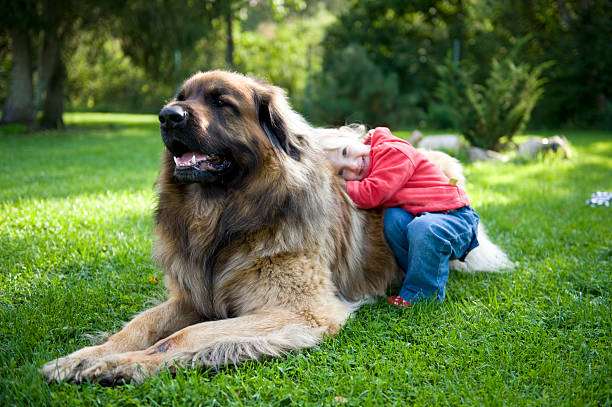 The first Leonberger breed club was to be founded in Berlin in 1891. The breed experienced dark hours during the first and second world wars. Although she did not share the history of the German shepherd, she also came close to becoming extinct. Today, the breed has long since recovered and is enjoying growing popularity. He is also represented in attractive numbers at exhibitions.

This extremely child-friendly dog ​​has secured its place as a family dog ​​and has also proven itself as a companion dog.

The character of the Leonberger should be firm and of sovereign composure. For decades, the breed has been bred to be family-friendly, and so the character of the Leonberger shows great composure, a high tolerance limit, willingness to subordinate, and a medium temperament. All these characteristics make the Leonberger child-friendly and adaptable. He is also suitable as a guard dog. Although Leonberger is not a barker, he will attack if he sees himself or his family threatened. The origin of the breed lies in guarding farms. Also characteristic of him is his clingy nature and his need to be allowed to be a permanent part of the family.

Leonberger and children – that fits. He is an extremely affable and affectionate dog that most owners would vouch for. With children, there are no problems with appropriate socialization. At least these statements apply to the majority of these wonderful big dogs. The same applies here. Rare exceptions prove the rule. This includes the fact that children also have to learn how to handle their dogs properly. Thanks to its high stimulation threshold, it will send out enough signals before it pinches or defends itself.

The Leonberger is open to strangers and usually does not show any aggressive behavior. Even within his own four walls, he is very sociable and open to newcomers. He still fulfills his watchdog function. The dog will be a watchful companion on evening walks, its size alone acting as a deterrent to strangers who are up to no good.

The Leonberger is considered to be an extremely well-tolerated dog breed. Leaving aside the display behavior among males, the Leonberger is pretty much everybody’s darling in the dog park. Early attendance at puppy and dog school encourages desirable, peaceful behavior in general.

The Leonberger is also peaceful with other animals, provided they have been socialized accordingly. The sooner contact is made with different creatures, the greater the chance of an all-around compatible dog. 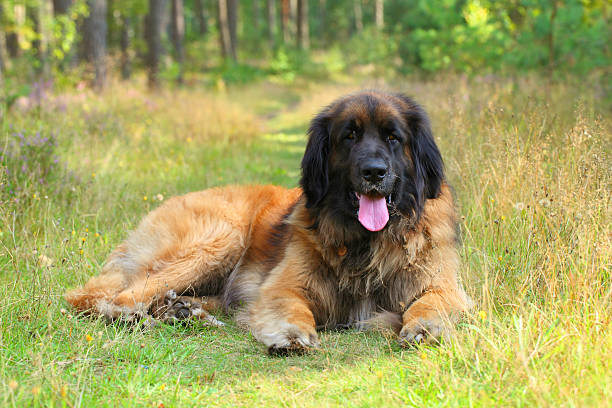 The Leonberger is neither a lazybones nor a top athlete. His temperament and his urge to move are well described as moderately pronounced. Depending on their age and overall health situation, they can accompany their masters and mistresses while jogging or cycling. If it’s just a long walk, that’s often the end of it.

As with us humans, there are different characteristics of the Leonberger in terms of their temperament and urge to move. If you are expecting a persevering athlete who steals the show from the others in agility and co., it is best to avoid the breed. You can persuade her to search for tracks and at the latest in the water, he literally blossoms. Leonbergers love to splash around.

The majority of Leonbergers have no hunting instinct. Of course, not every dog ​​manages to walk past the game without any problems and is disinterested. But the conditions are good that rabbits and deer can pass without a spurt. Anyone who teaches the dog the right behavior at an early stage by attending dog school and giving the dog a reasonable amount of work increases his chances of getting a dog without a hunting or prey instinct.