A Mastiff’s coat is short and rough, yet it lies smooth and close to the body. Apricot-dark gold, silver-dark gold, and dark gold with brindle are permissible for the coat color, the mask must always be black.

The Mastiff, whose name derives from the Latin word for the domestic dog, “Martinus”, belongs to the FCI group 2 of the Molosser and has its origin in England. A minimum height of 75 cm (76 cm in the USA) is required for males, bitches should not fall below at least 70 cm shoulder height. Its ideal weight is at least 75 kg, but this huge dog can easily reach 80-86 kg.

The Temperament of the Mastiff

In terms of nature, the Mastiff can be described as a gentle and sensitive giant, despite its frightening exterior. He is good-natured, kind, and without any deceit. When buying such a dog, you should make sure that you don’t buy a fearful or aggressive animal. 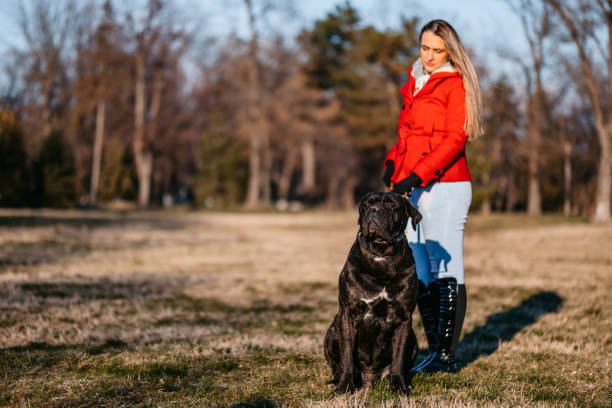 Nevertheless, like a dog that is still used for guard duties, it has an innate protective instinct that requires firm leadership. Luckily, he can be raised very easily with love and consistency. He is intelligent and calm, never unnecessarily aggressive but even-tempered and gentle, and devoted to his family.

Since he could be described as a typical “creature of habit”, he does not like changes in his family or his environment. That is why you should only get a Mastiff if you are willing and able to keep him with one and the same family for his entire life, which, unfortunately, like so many other giant breeds, is not very long for him. Although he is not particularly fond of running, due to his enormous size, he needs a relatively large amount of space to feel comfortable over the long term.

The high cost of living, i.e. food money, does not exactly make him a dog for everyone. However, if you can and want to afford him, you have gained an extremely lovable family member and if you use him as a guard dog, his imposing appearance is usually enough to immediately put any burglar to flight.

Origin of the Mastiff Breed of Dog

As is so often the case, there is still no consensus among experts to this day on exactly where the Mastiff originated. In any case, it is certain that it is one of the oldest breeds in the world since it was already around 2200 BC. on Babylonian wall reliefs. But also from Egypt in the 3rd millennium BC. Images of mastiff-like dogs have been found. There is agreement that the old Tibetan Mastiff is the forefather of this breed with a probability bordering on certainty, but it is not clear who brought him to England.

He either got to the British Isles through Phoenician traders or he accompanied the Angles and Saxons on their campaign of conquest to Great Britain. In any case, the Roman troops under Julius Caesar were very impressed by the courage and strength of these dogs when they attacked them in 55 BC. invaded England and not only had to fight the native warriors but also had to deal with these huge, fearsome beasts.

Brought to Rome by the conquerors, the mastiffs had to fight in the arenas there, to the amusement of the population, against other dogs such as the Italian Molosser, which very often lost out in these fights. Used as war dogs up until the 17th century, they were trained not only to fight other dogs and dangerous predators but also to hunt wolves and bears and bait bulls.

It is said that mastiffs took part in the Battle of Azincourt in 1415 and that they have been bred since that year at the Legh family’s famous and still existing Lyme Hall kennel in Cheshire. 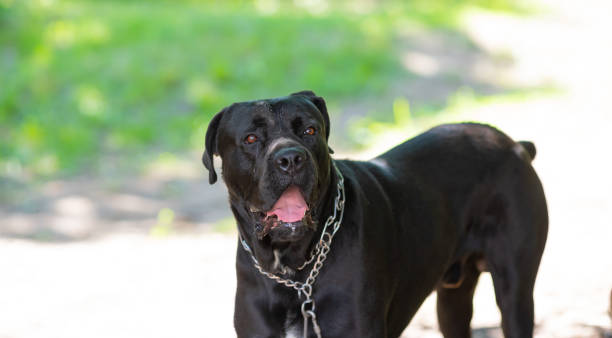 He was so popular with the English kings that King Henry VIII, for example, once gave his Spanish “colleague” Charles V 400 mastiffs for war purposes, as a special favor to him. When the Normans invaded England, mastiffs were so widespread that the French word for a mastiff, “dogue”, which can still be found today in the word “dog”, was used there as a general term for dogs.

When dogfighting was outlawed in the 1800s, interest in mastiffs quickly declined. After the breed was briefly reactivated by crossing other breeds, presumably St. Bernards, interest quickly declined due to blatant breeding mistakes, people wanted to breed away from the original long head for reasons of fashion. Only the already mentioned Lyme Hall kennel and the kennel of the Duke of Devonshire in Chatsworth continued the breed in two lines.

Unfortunately, the world wars of the 20th century meant that food shortages meant that no one was able to feed these huge animals, and by 1948 there were only 8 breeding-age Mastiffs left in England.

The breed was rebuilt with the help of excellent puppies from Canada, donated by a local quality kennel, but also with the support of other breeds such as the Bullmastiff, which the Mastiff once helped to create.

Possibly the Great Dane, Newfoundland, and St. Bernard were also involved in the rebuilding. Unfortunately, inbreeding caused damage to both body and temperament, so even today it is still occasionally possible to find Mastiffs who are extremely fearful. Although raising a mastiff puppy to adulthood is neither easy nor cheap, responsible breeders are now well on the way to eradicating these mistakes, despite the fact that breeding is not easy.