The Shar-Pei or Chinese Folded Dog is a pedigree dog from China. As an unflattering alias, it is known as the Chinese Fighting Dog. A relic from the time when the Asians believed they had to oppose the British colonial rulers with a native fighter.

Expert opinion differs about the assumed age of the Shar-Pei breed as much as the breed standard itself is inconsistent. For the sake of peace, there are two FCI standards. The number 309 is followed by the additions /1994 and /1999 respectively.

It would go too far to conclusively prove the reasons for the duplication. Line 309/1999, which is more widespread in the western hemisphere and is under the auspices of the USA, is described here. 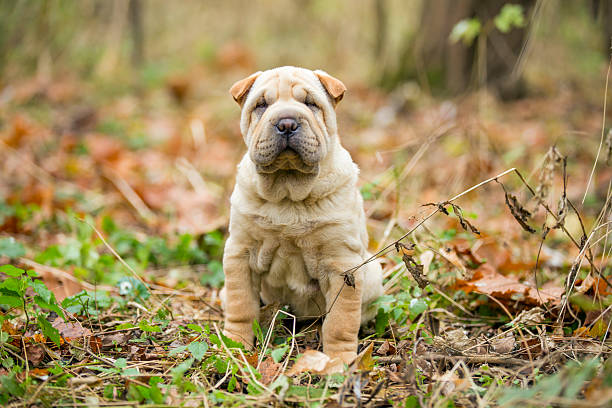 As is so often the case, experts do not always agree on its exact origin. Already around 200 B.C. During the Han Dynasty, Shar Pei-like dogs were depicted in the artwork. It is likely that Chow dogs were crossed with western mastiffs that made their way to China via the trade routes of the time.

Except for the lots of skin, the thick padding over the muzzle, and the small floppy ears, which are completely different from all other breeds, the similarity to short-haired Chows is very striking, especially since they have black pigments in the muzzle cavity and on the tongue.

Crossbreeding with other Nordic breeds is also possible. Others suggest its ancestor might be found in a now-extinct, much larger dog native to northern China and Tibet some 2,000 years ago. However, a relationship between the pariah dog and the working dog of southern China cannot be entirely ruled out.

The southern coastal provinces of Dah Let and Quantung are considered to be his homeland, where he has been used by farmers for centuries for hunting, herding cattle, and as a watchdog, but he also proved to be an extremely difficult opponent in dog fights.

Drugs are thought to have made them insensitive to pain and aggressive in order to increase their owners’ chances of winning.

The wrinkled, loose fur, the small ears, and the deep-set eyes also made it very difficult for the opposing dog to really grab the Shar-Pei with its teeth when biting, and its short, bristly hair was anything but a pleasure for the attacker’s mouth.

Over the years, the Shar-Pei also gained more and more fans outside of China, only in its home country it was almost threatened with extinction when the government increased the dog tax so drastically in 1947 that most owners could no longer afford this animal and the Shar-Pei almost completely disappeared from mainland China.

It was only able to survive in Hong Kong, Macao, Taiwan, and some remote southern Chinese villages. In 1971, Hong Kong breeder Matgo Law published an appeal for help in an American dog magazine, asking the western world to save this imposing breed from extinction.

Despite its history as a fighting dog, the Shar-Pei is an exceptionally friendly, lovable breed of dog. Nevertheless, it can happen that his dominant mastiff heritage occasionally breaks through and he then messes with housemates.

He is reserved towards strangers, but cheerful and considerate. Although alert and always ready to defend, he is not sharp or aggressive. His strong, independent personality requires early socialization with a solid upbringing.

The innate philanthropy makes it necessary to get him used to living in an apartment at a very early age. But then you get a temperamental but affectionate roommate. This original and very rare domestic dog is absolutely unsuitable for life in a kennel, a permanent stay there would be great torture for him.

However, since he is known for his pronounced cleanliness, it is even said that his puppies would train themselves to be housebroken, nothing should actually stand in the way of living in his family’s apartment.

To tease a Shar-Pei requires excessive effort to do so. Rather, the four-legged friend shows a friendly, child-loving, and family-related nature. Without contact with his family, the dog suffers.

His eventful history has made him an active, bright, and independent companion. The Shar-Pei is reserved and wait-and-see towards strangers and quickly adopts the attitude modeled by its humans. He is vigilant and stands up for his family when it matters most. He doesn’t tend to bark.

A Shar-Pei Has Character 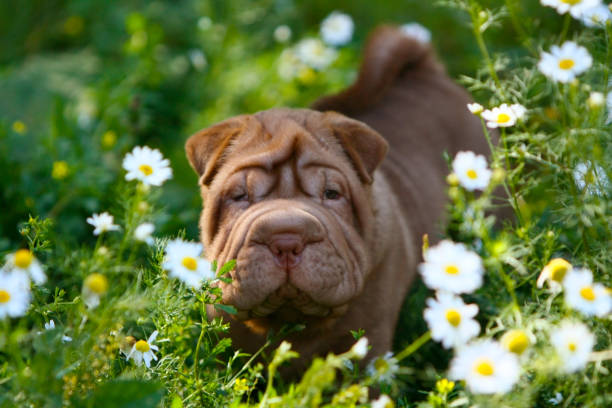 The individuality of the four-legged friend makes socialization a little more demanding. Nevertheless, the well-positioned dog owner succeeds in letting the Shar-Pei puppy grow into an obedient one-man dog or a popular family member.

Training requires patience and consistency in equal measure. However, attempts at coercion and dressage miss their target. The Shar-Pei blocks and refuses. With assertiveness in a friendly way, the dog owner achieves everything. His four-legged companion adapts to him in a good mood and sensitively. The organization of everyday life is more important than the living environment of the dog.

He likes to live his rhythm and is a friend of quiet but varied walks. Sniffing and extensive exploration are in the foreground – there is no room for dog sports activities. A noticeable dominance behavior when meeting other dogs as well as the desire for a successful hunt is deeply anchored in the character of the Shar-Pei.