Guinea pigs should never be kept alone. They need conspecifics – a rabbit is not a substitute. Read here what you have to consider when socializing guinea pigs so that a harmonious group is formed.

Contents hide
1 Pure female or male groups in guinea pigs?
2 Merge male guinea pigs
3 Preparation of the socialization of guinea pigs
3.1 The guinea pigs come from a litter / from common housing
3.2 A new guinea pig is to be integrated into an existing group
4 The first merging of the guinea pigs

Before you get two or more guinea pigs, you will surely ask yourself the question of the sexes and the best composition of a guinea pig group. The most natural and best constellation consists of a castrated male and one or more females. Such a group corresponds most closely to the nature of the guinea pig and allows the animals to carry out their full behavior. 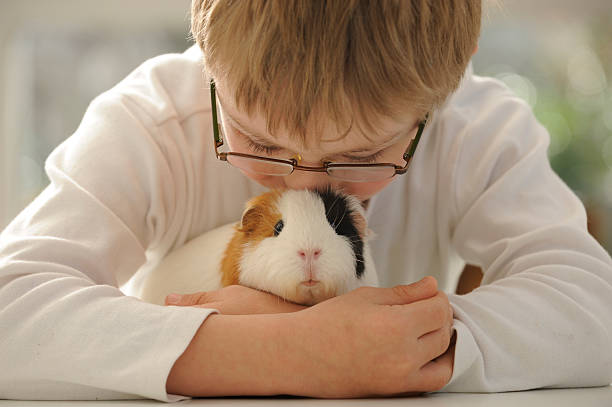 Keeping an all-female group is usually problem-free and harmonious. However, this is not the natural way of life of guinea pigs. It is always better if a castrated buck lives with the group. He will act as a “mediator” in disputes between the females. Keeping several males is possible, but just as unnatural as a group of females.

Males should always be socialized when they are about five to eight weeks old. It is not advisable to socialize adult males, as there are usually problems with the hierarchy. But even if the males have already been socialized for a few weeks, there can be stronger arguments after the onset of sexual maturity. It is very important in an all-male group that no females live in the same room (no eye contact and no smell perception).

Preparation of the socialization of guinea pigs

If you want to socialize guinea pigs, you have to distinguish between whether the animals have already been kept together or whether they are still complete strangers to each other.

The guinea pigs come from a litter / from common housing

If you start keeping guinea pigs and immediately get two or more animals, socialization is easier. The environment and the enclosure are unfamiliar to all guinea pigs. If the animals come from a litter or are kept together, they already know each other and no longer need to get used to each other.

If you want to integrate one or more newcomers into an existing group, it will take a little more time to socialize the guinea pigs. The new guinea pigs should initially be quarantined for at least two weeks, i.e. housed in another room. Otherwise, there is a risk that you will bring diseases into the already existing group.

Even if the new animals look healthy, it is possible that they are infected with a pathogen. After the quarantine, the guinea pigs can be brought together in the run, for example. The socialization can also be carried out in the enclosure. However, this presupposes that it is large enough (at least two m² for two animals, 0.5 m² more for each additional animal) and has been cleaned well.

When setting up the enclosure or running, make sure that there are enough hiding places. All houses and caves must have at least two (preferably three) entrances so that none of the animals are pushed into a corner and can escape at any time.

The first merging of the guinea pigs 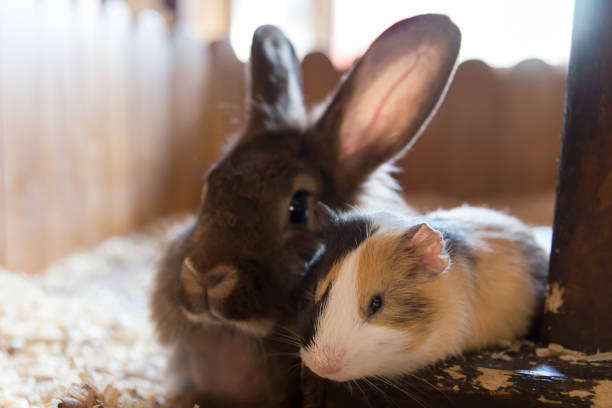 If the animals meet for the first time, it is best to plan some time to carefully observe what is happening.

All guinea pigs are placed in the enclosure or run at the same time. Now you can observe the exciting behavior of the guinea pigs. First, the animals sniff each other and chatter their teeth. High-ranking females and males try to mount the lower-ranking animal. Here they often run long and intensively mumbling behind the clamoring conspecifics. If the dominant guinea pigs manage to mount, the rank is usually clear. Most of the other group members just raise their heads and chase the newcomer away. But it can also be that there are stronger threatening gestures and biting.

Even if the socialization through the vocalizations and mutual hunting seems threatening, you should not intervene. In this way, the animals clarify their hierarchy. However, if your guinea pigs hurt each other, it is better to intervene immediately and separate the animals. It can take a few days for the group to calm down. If the guinea pigs have been socialized in the run and interact peacefully there, they can be placed in their shared enclosure. If there are no new disputes here either, the merger has been successful.