With its lion-like appearance and friendly nature, the Leonberger is absolutely unique. Nowadays, the breed is very popular, especially as a family dog ​​and companion dog. Here you can find out everything you always wanted to know about the impressive dogs.

Contents hide
1 History of the Leonberger
2 Traits and Character Traits
3 Is The Leonberger Right for Me?
4 How Do I Keep a Leonberger?
4.1 Puppy education and development
4.2 How much work does the Leonberger need?

History of the Leonberger

The history of the Leonberger goes back to the beginning of the 19th century. The city councilor of Leonberg, Heinrich Essig, is considered the founder of the breed. He made it his goal to breed a dog that should look similar to the heraldic animal of the city of Leonberg, a lion. So he started mating a male Saint Bernard with a black and white female Newfoundland dog around 1840.

Over the years he crossed other St. Bernards and Pyrenean mountain dogs to perfect their appearance of the dogs. The first real Leonbergers as we know them today were born in 1846. The large and good-natured dogs became increasingly popular outside of the city and served as guard or draft dogs until the war. Even Empress Sissi personally bought a puppy bred by Essig.

Since hardly anyone could afford a large dog during the world wars, the number of breeding dogs fell sharply. It is only thanks to a few enthusiasts that the breed did not become completely extinct. The breeders got together and built up a new breed together, which has survived to this day. 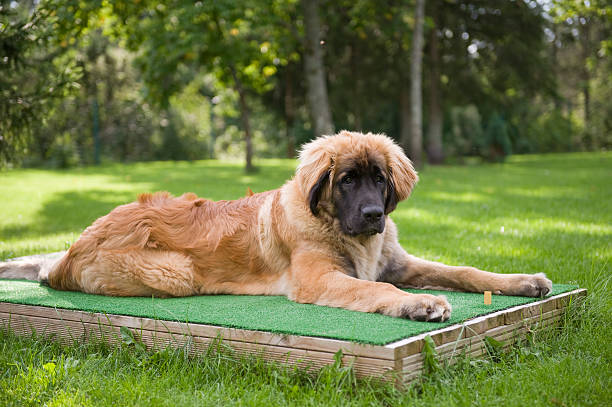 The Leonberger is a good-natured and calm dog with a high stimulus threshold, which is not disturbed by anything. Lively and curious, Leo gets along well with children and loves to play for hours at a time. Puppies in particular are carefree and captivate with their joyful, impetuous and clumsy nature. The loyal and obedient breed is therefore perfectly suited as a family dog ​​and, with good training, will be a great partner for life. Thanks to its innate instinct to guard, the fearless breed also makes a good watchdog, protecting its family in any situation. The big dog remains calm and does not tend to be aggressive. The dogs are more relaxed towards strangers and only bark when they see their own territory threatened.

Is The Leonberger Right for Me?

If you want to bring a Leo puppy home, you should of course be 100% sure that the dog suits you. With a life expectancy of around nine years, Leo will remain an integral part of the family for a long time. In addition to daily walks, you also have to take care of the mental workload and care of the dog. You should not ignore the enormous size of the lion dog. The most important criterion before buying a puppy is that you can give it enough space. Ideally, you keep your Leo in a large house with a fenced yard that he can guard.

When you’ve finally decided on the breed, all you have to do is find a reputable breeder. It is best if he is affiliated with the International Leonberger Union, which is recognized by the FCI. Here you will almost certainly get a purebred and healthy puppy, which of course does not come cheap. You can calculate up to 2000 euros.

How Do I Keep a Leonberger?

The Leonberger is a quiet dog that needs consistent and considered training. With enough patience, the upbringing of the breed is easy to master, even for beginners. Right from the start, the dogs show a great willingness to subordinate themselves and need a self-confident “pack leader”. Because of its enormous size and weight alone, you should start showing the dog who ranks higher as early as possible. With aggression and loud roaring you achieve little and the sensitive dog switches to stubborn. 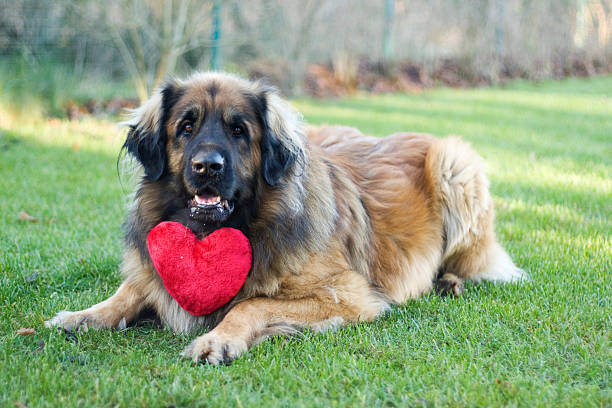 You can achieve far more with serenity, because many Leos will do just about anything for a treat. With the targeted use of praise, you’ll have a great four-legged friend in no time.

How much work does the Leonberger need?

The big dogs may not always seem active, but they still need their daily dose of exercise. Long walks are the order of the day and contribute to the good health and fitness of the animal. The Leonberger fearlessly accompanies his family everywhere and would like to be there all the time. As descendants of the Newfoundland, the Leonbergers are big fans of the water.

So in summer he is not averse to a swim in the nearby pond or a splash around with the garden hose. If you want to challenge your dog more, you can also use the Leo for dog sports without any problems. The best way to get the big water rats excited is dummy training in the water or other retrieval exercises. If you want to approach the whole thing professionally, nothing stands in the way of training as a rescue dog.