Whippet – the large, noble-looking greyhounds from England not only score with their incredible speed when running but also with their quiet, friendly and even-tempered nature.

Contents hide
1 History of the Whippet
2 Essence and Character
3 Purchase of a Whippet
3.1 What do I need to pay attention to when purchasing?
4 Puppy Development and Training

History of the Whippet

The history of the elegant hunting dogs is as mysterious as it is exciting – because nobody knows exactly when and by whom the first whippets were bred. Presumably, however, it was English miners who stole greyhounds and various types of terriers from the nobility in order to use them for hunting: there was often great hunger, and with the fast, agile dogs, the poor working families were able to supplement their otherwise rather meager diet with delicious rabbits and hares extend.

Later, the incredibly fast animals, which also move extremely gracefully, were used in dog races – a sporting pleasure that neither the nobility nor the common people missed and which continues to this day. 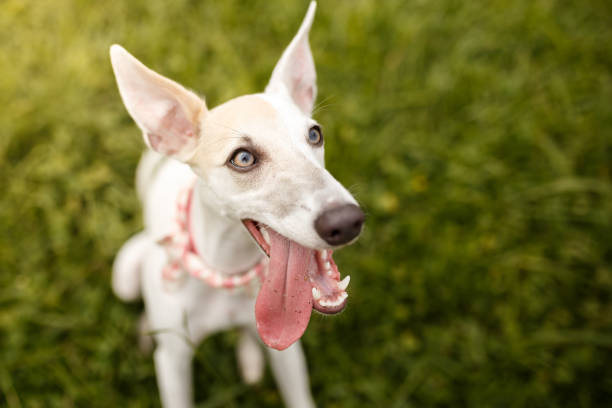 The dogs with their elegant appearance not only look very elegant, but they also know how to behave perfectly in many different situations – with appropriate training – and are therefore very well suited not only for hunting but also as a loyal companion in everyday life. They welcome guests in restaurants, in parks, and on many other occasions because they can be quiet and unobtrusive. A busy Whippet will also be a pleasant companion at home: the medium-sized dogs are affectionate and cuddly and love physical contact when dozing and sleeping. Therefore, many dog ​​owners keep not just one, but several whippets to enable a species-appropriate lifestyle in the pack.

The Whippet is completely different outside: Since it has a very strong hunting instinct and urges to move, it is always on the lookout for potential prey in the woods and fields, which makes good training so important. The hunting instinct should only be controlled right from the start and only allowed in connection with play and fun with the owner, otherwise, the free-run, which is so important for the whippet, can only be possible in fenced-in terrain. He also loves to run, play and romp, is agile, and is very active. Dogs of this breed find it difficult to accept longer phases of rest and listlessness. Despite its balanced nature and character, a whippet is not recommended for couch potatoes!

Purchase of a Whippet

Anyone considering getting a Whippet should be aware that these dogs require a lot of company and physical contact – so it may be advisable to keep two or more of these dogs together so they don’t feel lonely – especially when the Holder has to go to work on the side or has to other commitments.

Otherwise, of course, you also have to consider the great urge for exercise and fast running: Not everyone can really guarantee that much exercise. Whippets are already suitable as partners for jogging, but they have to slow down a lot. Even next to the bike, the incredibly fast dogs can’t really exhaust themselves completely; after all, they can reach speeds of up to 56 km/h! So it would be ideal to use them for fast sports such as agility, coursing, and dog racing – or for hunting, their original purpose.

First of all, of course, the question arises whether it should be an adult whippet from the animal shelter or from a private owner or rather a puppy from a breeder.

With a Whippet puppy, as with puppies of all breeds, you have to make sure that it comes from a reputable breeder who pays attention to the health and character of the parents, avoids inbreeding, and professionally shapes the puppies from the beginning and prepares them for their later life. No buying from the trunk, dingy shops or dodgy pet stores, or via shady websites – a puppy is a living being and the search for one should never degenerate into bargain hunting!

With an adult whippet, it is important that the chemistry between the animal and the future owner is right; here you can also find out useful information about character, habits, basic training, and availability as well as the characteristics of the hunting instinct from previous owners or animal shelter employees. Older dogs are also usually already aware of possible illnesses and intolerances, so you can estimate the veterinary costs you will have to face in the future before you buy them. You can not only find a full-grown whippet in animal shelters, clubs such as “Whippet in Need” have also dedicated themselves to placing whippets who are looking for a new home. 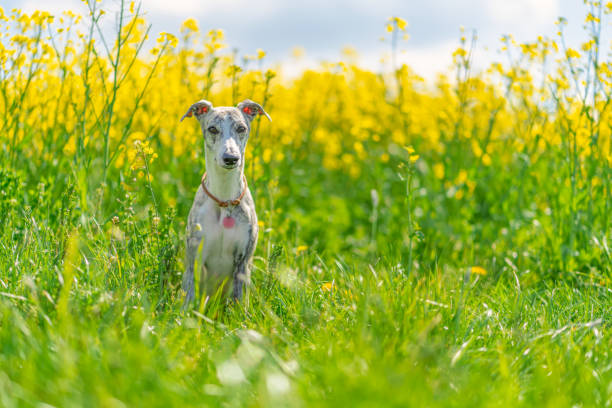 A Whippet puppy, like any other puppy, is a baby to a toddler, to begin with – everything is new and exciting to them and they still have a lot to learn. In the first year, short units are sufficient, in which above all the recall, but also the most important basic commands are learned and consolidated. In addition to everyday life, practicing how to behave in traffic, the rules in the new home, and getting used to the harness and leash, this is enough material to mentally exercise the dog; with everything else you could overwhelm him and make a hyperactive bundle of nerves out of the otherwise rather stable and calm dog.