The Alaskan Malamute, which takes its name from the Inuit tribe of the Mahlemuten, is classified in FCI Group 5 Peak and Archetype.

Its origin can be found in the USA. According to the breed standard, the ideal height for males is 64 to 71 cm, for females the shoulder height should be 58 to 66 cm. The desired weight is between 38 and 56 kg. The Alaskan Malamute’s coat consists of a soft, dense undercoat with coarse top hair that sticks out from the body.

Since the Stone Age, sled dogs, or the combination of sled and hunting dogs have been an important part of the culture of the Nordic peoples. Without dogs to transport their belongings from place to place, the nomadic peoples could never have existed. In addition, in the frigid climate, dogs were the only domestic animals that could survive. Researchers do not agree whether the ancestors of the northern Eskimo tribes reached Alaska via a land bridge that existed at the time or whether they immigrated from Scandinavia via the North Pole. 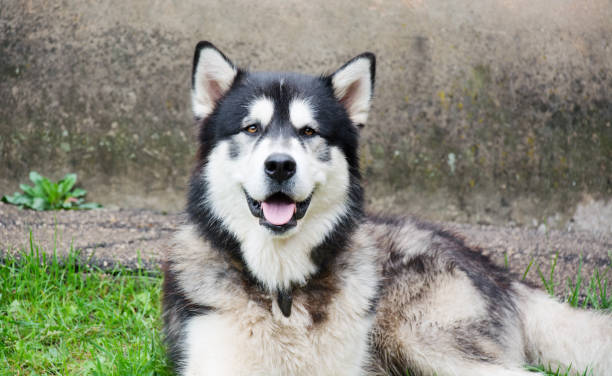 What is certain, however, is that these tribes were already accompanied by dogs. Each tribe developed its own type of dog, which was adapted to the respective hunting requirements, the ground conditions, the temperature, and the snow conditions. These dogs were so perfect that they have been kept pure to this day.

The Mahlemuten tribe were Eskimo people who lived in upper western Alaska across from Siberia. They, too, were nomads, moving on with all their possessions when they needed to find a new source of food. Because of this, they needed dog breeds strong enough to move people’s belongings and carry goods to and from the trading posts. They also used the dogs to hunt polar bears and wolves, but also to guard their herds of caribou.

Even the earliest North American settlers mentioned this imposing breed in their reports, for which the Mahlemuten were always the envy of the other Eskimo tribes. The Mahlemuten tribe was never mentioned without also referring to their sled dogs.

In the 19th century, early European explorers, as well as Russian whalers, reported that Mahlemuten had “hounds of great endurance and beauty” and that they “loved their hounds. The dogs work hard and are very persistent.” When Alaska was then settled by the whites between 1750 and 1900, a lot of sled dogs were needed. The immigrants were only concerned that the dogs could move as much mass as possible as quickly as possible.

In addition, the advent of sled dog racing and the attempt to get faster animals by crossing Malamutes with “high-speed dogs” almost wiped out the breed. Fortunately, some Eskimo tribes kept their dog types pure, and American dog breeders were also interested in keeping and promoting the Alaskan Malamute as a pure breed.

Unfortunately, the number of dogs was greatly reduced again during the First World War by search and relief operations, but also by polar expeditions and supply work for the war. Only after the war was the studbook reopened and new breeding material was added to the animals already registered, and it was not until 1926 that serious steps were taken in the USA to preserve the purity of the breed.

The Malamute, which is one of the oldest sled dogs, is now primarily bred in North America and Europe to pull private sleds. Many owners also enter their dogs in weight-drawing competitions, with many Alaskan Malamutes capable of pulling a tonne charge a short distance. The Alaskan Malamute is as far removed from the Siberian Husky as an elegant Arabian stallion is from a heavy draft horse.

Larger and more powerful, the Alaskan Malamute is able to pull heavier weights and carry them on its back for long distances. He excels more in strength than speed. It’s never big enough to appear clumsy, but it still embodies power and substance. 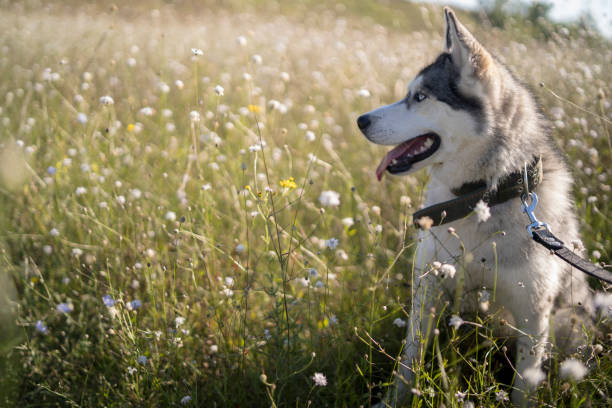 Nature of the Alaskan Malamute

A rough and wild breed by nature, the Alaskan Malamute prefers to be outdoors and requires adequate exercise. He is a very good worker and an excellent watchdog. He is loyal to his family. He is friendly and trusting to all strangers, and he is not related to one person. Despite possessing a calm and easy-going nature, this extremely intelligent dog needs activity and exercise.

In addition, he must be trained consistently from an early age, otherwise, he would strive for leadership of the pack. The Alaskan Malamute is absolutely not a dog for a beginner and definitely not suitable for people who do not have the time and will to deal intensively with this impressive dog.

One should not forget that the Alaskan Malamute is a real muscle man with an enormous muscle mass, which is also equipped with pronounced self-confidence. He needs a lot of contact with people and is always willing to take part in physical activities of all kinds, such as cross-country skiing or sled dog races.

If kept too isolated, he will show his displeasure by howling constantly. The Alaskan Malamute is a clean, affectionate house dog, but requires a firm hand to know who his master is. But then he proves to be an extremely lovable family member.