The Lhasa Apso is a breed of dog from Tibet. The FCI (Fédération Cynologique Internationale) registered this pedigree dog under the standard no. 227, Group 9 – Companion and Companion Dogs, Section 5 – Tibetan Dog Breeds, Registered. Special feature: The studbook is kept in Great Britain.

Contents hide
1 History of the Lhasa Apso
2 Essence and Character
3 Health and Care
4 Acquisition of a Lhasa Apso
4.1 What do I need to pay attention to when purchasing?
4.2 Puppy development and education

History of the Lhasa Apso

The Tibetan Lhasa Apso has an impressive history. Such dogs have been bred in Tibet and northern India for over 2000 years. The Buddhist monks (lamas) in particular had a special relationship with these dogs. They referred to them as “ambassadors of peace and happiness.” In their belief system, the Lhasa Apso embodied the reincarnation of some deceased fellow believers.

These were denied access to the “oriental paradise of bliss”. The task of these “sacred” dogs was to guard the treasures of the Buddha. It was frowned upon to sell these dogs. They were given as a gift. This brought them to various royal houses and to the Chinese imperial court in Beijing. In the Chinese new home, he was given the name Shi-Tzu-Kou. 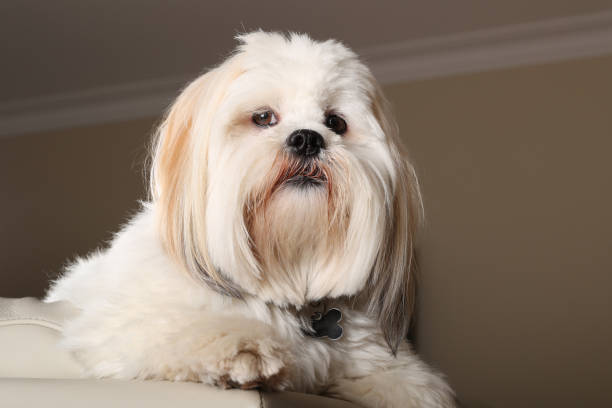 Translated it means: “Dog coming from Tibet”. The high reputation of this dog in its Tibetan homeland is also made clear by the naming. Lhasa is the capital of Tibet. The addition Apso describes his appearance: cuddly, shaggy, long-haired. The common term “lion dog” refers to the head of hair, which is reminiscent of a lion.

During the colonial period, the English brought the first specimens home in 1901. Additionally, the Lhasa Apso was sent to England as a personal tribute to the Dalai Lama. Since that time, this breed of dog has been bred in England. In 1933 the first Lhasa Apso breed club was founded in the British Isles. A year later (1934) the breed standard was established. Years later (1960) this dog breed was recognized by the FCI.

Breeding of this Tibetan breed of dog only began in Germany in the 1970s. Despite numerous friends of this special breed, the Lhasa Apso is a rarity in Germany. The annual number of puppies registered varies between 50 and 130.

The Lhasa Apso character is characterized by temperament, self-confidence and intelligence. This combination sometimes leads to a certain idiosyncrasy, which is easy to handle through consistency. This lively and playful housemate loves close contact with his family and is affectionate. If you are looking for a lap dog, look no further than the Lhasa Apso dog breed. This active dog needs a lot of exercise and exercise. Despite his friendly nature, he is often reserved with strangers. He also tends to be protective of his family and is vigilant and will “report” any kind of occurrence on his own. If you can meet the needs of this lively dog, you’ll have a well-balanced companion.

Lhasa Apso dogs are not prone to disease. They are among the tough dogs. Sometimes they can be burdened with HD (hip dysplasia) or with a patella luxation (kneecap problem). Various eye diseases are also possible. Reputable breeders avoid matings with compromised parents. Despite the beautiful head of hair, the maintenance effort is not particularly high. Regular brushing prevents tangles.

The time commitment is limited to 2 days a week. You should be more active when changing fur. Daily brushing is an advantage at these times, especially because of the dense undercoat. It also makes sense to trim the fur around the face (eyes) regularly. This haircut gives the Lhasa Apso a “clear view”. The length of the top coat should not restrict the freedom of movement of the four-legged friend.

Acquisition of a Lhasa Apso 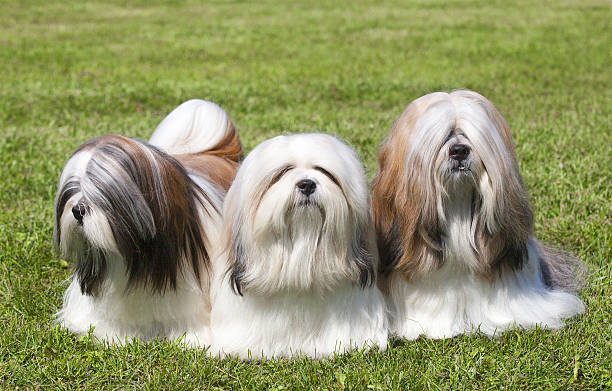 Buying a Lhasa Apso is a matter of trust. Reputable sellers are always ready to present the mother dog with her offspring in the familiar environment. Delivery usually takes place in the 12th week of life. Of course the little ones are chipped. The Lhasa Apso price ranges from €1,500 to €2,000. A reputable breeder has their offspring veterinary care (vaccination, deworming) and can prove this with an EU ID card.

Lhasa Apso puppies should be socialized and trained from an early age. Puppy courses offer professional support. A loving consequence is important for dog beginners. This confident breed takes advantage of inconsistency and carelessness. As a result, a cute puppy or young dog can become overbearing very quickly. Despite his independence, he is easy to train.