Its origin can be found in the Himalayan state of Tibet, which has been occupied by China for over fifty years. The exact origin of the breed name is still disputed today. The only thing that is clear is that the first part of the name derives from the Tibetan capital Lhasa.

Lhasa is a religious center on the Himalayan high plateau and the capital of the Tibet Autonomous Region. The Lhasa Apso pedigree dog originally comes from the Himalayan region and, according to various sources, has been known there for several hundred years. Accustomed to high altitudes and sometimes very harsh climates, the dog accompanies noble Tibetan families as well as the residents of monasteries.

Since this city is also the religious center of the country, these dogs also live in the most numerous numbers there. “Apso” comes from either “also seng kye” which means “barking, protective lion dog” in the Tibetan language, or from “rapso” which is the Tibetan word for “goat” and a description of the wiry, long hair this breed could be. 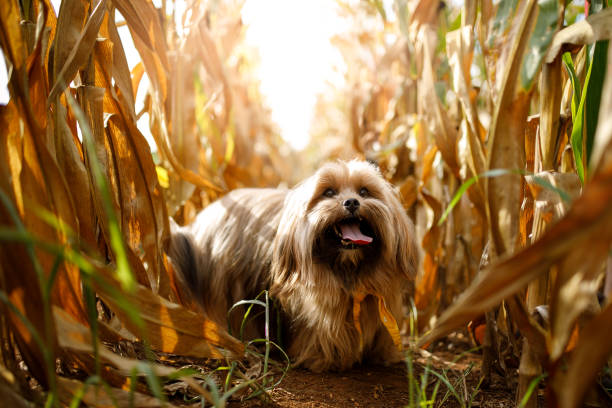 The ideal size for males is between 25 and 26 cm, other sources state 28 cm as desirable. Females are slightly smaller. The Lhasa Apso is renowned for its longevity, living up to 18 years is not uncommon for this breed. One specimen is said to have even reached the age of 29 years! The Lhasa Apso is not only called the Tibetan Lion Dog or the Lion of Buddha, it is often mentioned in the same breath as the Lhasa Terrier.

Even today, the guardian of house and yard is lively and, depending on how you look at it, a bit stubborn or overbearing. The vigilance and attention have remained. He observes his surroundings, and barks briefly without being a barker. Although very even-tempered, he eyes strangers with conspicuity.

His human companion has to earn his trust. Proud, headstrong, extremely self-confident, and intelligent, he remains a friend for life – once the ice is broken. A Lhasa Apso is a quiet and reserved representative, he can be taken anywhere without hesitation.

At the same time, he is a happy and grateful playmate. Cheerful and fearless, lively and extremely agile, he longs for long walks. You don’t necessarily see his athletic robustness. The long hair with the dense undercoat reaches far beyond the eyes.

The coat has a dense undercoat with a long, straight topcoat that is wiry, coarse, and heavy, completely covering the eyes and head and reaching to the ground. There is a pronounced crest along the entire length of the spine.

The colors are gold, honey, and sandy, with black tips on the ears, tail, and beard if possible. But also a gray mixed, smoky, black, white, brown, or multicolored coloring can be found. The Lhasa Apso is also known as the “Lion Dog of Tibet” because of the often occurring golden to honey-colored fur.

Unfortunately, this beautiful hair can become matted very quickly, which is why it must be cared for very carefully and regularly, not only in the show dogs but also in the animals living as family dogs. The unflattering long hair on the head offers protection from glaring light, wind, and dust. The fur colors change in the course of its life.

Origin of the Breed

As with so many dog ​​breeds from the Far East, only fragmentary knowledge is available about the exact origin of the Lhasa Apso. However, one is certain that the shaggy herding dog of Tibet, the Tibetan Terrier, which was the basis for many other breeds, is also an ancestor of the Lhasa Apso. 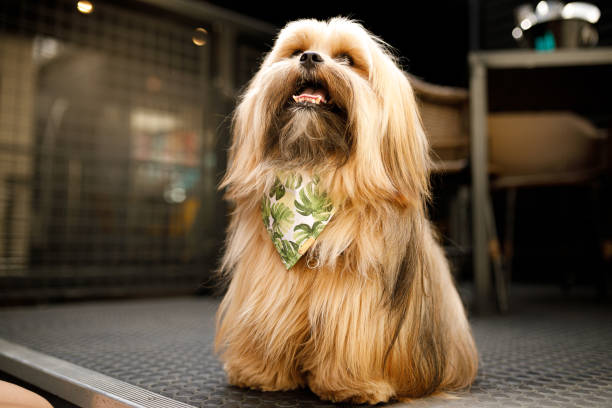 By breeding for dwarfism (brachycephalism), the Tibetan Terrier became the Lhasa Apso type dog. Shaggy dogs were known in Tibet as early as 800 years before Christ and for at least 2000 years the Lhasa Apso was bred exclusively by monks and the nobility. Although they were also supposed to serve as watchdogs and were even considered “sacred dogs”, they were particularly valued as lucky charms, which were supposed to bring peace and prosperity.

Since they were practically unsaleable, they were given to guests as good luck charms or served as return gifts. With Tibet’s conversion to Buddhism in the 7th century, the position of the Lhasa Apso was finally consolidated. For this religion, the lion was the symbol of the Tibetan rulers, represented by the lion throne of the Dalai Lama and the lion in the national flag.

Buddha made the lion the guardian of his temples, and legend has it that a lion followed him everywhere “like a little lap dog”. So a lion-like shaped and colored dog like the Lhasa Apso offered itself formally to prove the truthfulness of this story to the common people. Over time, this dog was present in every monastery and in every apartment of the nobility. It was even believed that a dog owner’s soul would enter the body of the Lhasa Apso after his death.