The robust Alpine Dachsbracke is highly valued by hunters because of its excellent sniffing nose and is used for hunting. In the following portrait, we explain what else characterizes the Dachsbracke.

History of the Alpine Dachsbracke

The Alpine Dachsbracke looks back on very old, still different-looking ancestors from the Austrian and Bavarian Alps as well as from Switzerland. At the end of the 19th century, they were increasingly bred in the Ore Mountains, which is why they were first called the “Alpine Ore Mountain Dachsbracke”. 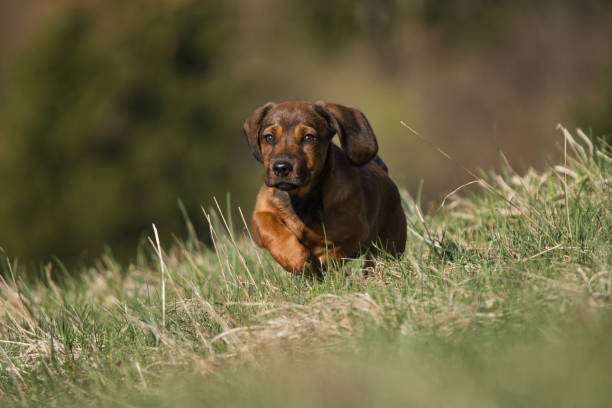 The breed was officially recognized in 1932 by the Austrian Kennel Club and in 1975 by the FCI. In 1975 her name was changed to ″Alpenländische Dachsbracke″ and Austria was recognized as her country of origin. Therefore it is also known under the name ″Austrian Dachsbracke″. She is registered under FCI Standard Number 254 and belongs to FCI Group 6 ″Scent Hounds, Scent Hounds, and Related Breeds″ and Section 2 ″Scent Hounds″.

The medium-sized hunting dog has a strong, muscular body with short legs, which is why it is classified as a short-legged dog. Its dense, somewhat dull-looking stock hair, with an equally dense undercoat, is ideally deer-red with or without black stitches. The badger hound can also have a black coat with reddish-brown tan markings on the chest, head, paws, legs, and underside of the tail, and a white breast star. The broad, medium-length lop ears of the Austrian Dachsbracke have smooth hair and are set high. Her hairy tail, which is also set high, carries her slightly downwards. She looks with her ″Dachshund look″ of deep brown, almond-shaped eyes.

The robust Alpine Dachsbracke has an excellent sniffing nose and a strong hunting instinct. Coupled with their intelligence and their courage, they are the ideal working dog for hunters. The Dachsbracke excels primarily at the welding work, i.e. at tracking down the game that has been shot, at the so-called tracking. She has an absolute will to track and follows her tracks calmly, purposefully, and safely, even though the water if need be. It is primarily used to track hoofed games, i.e. even-toed ungulates such as red deer, roe deer, or wild boar. After being tracked down, Alpine Dachsbracken fetches the game they have killed to their owners.

But the outdoorsman can also show what he can do when hunting brickies and sturgeon, for example, foxes and rabbits. When braking, the little sniffing nose follows the game with loud barking. With their “tracking sound,” the hunter can always understand where his four-legged, faithful companion is.

In the forest and in the mountains, the Austrian Dachsbracke feels at home in all weather conditions thanks to its weatherproof, water-repellent coat with thick undercoat. Even in inhospitable terrain such as in low and high mountain ranges, the tireless, independently working Austrian scenthound finds its way well. If need be, even for hours.

If the Alpine Dachsbracke is hunted in a way that is appropriate to the species, it is a reliable, cooperative companion for its owner that is easy to lead. The Dachsbracke nature also makes them a friendly and playful family dog ​​who feels at home with their ″boss″. She is extremely stress-resistant with children, always friendly and affectionate. However, if they are not kept in a species-appropriate manner and are not used to their full potential, they can develop ″man-made″ misbehavior. This can manifest itself, for example, in excessive whining or looking for alternative employment.

Acquisition of an Alpine Dachsbracke 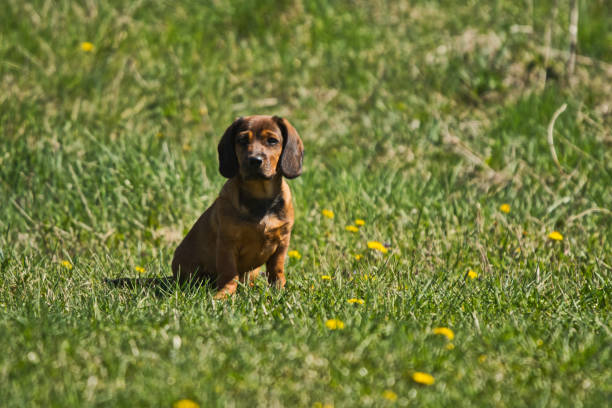 There are Alpine Dachsbracke breeders primarily in Austria and Germany. They are usually hunters or foresters themselves and are organized in a club such as the Dachsbracke e.V. association. This breeds puppies responsibly as needed and only gives the little four-legged friends to hunters. The Dachsbracke Club also mediates puppies, but only to its members.

Cost of an Alpine Dachsbracke

The price for the little nature boy is between 600 and 1,000 euros. At the Dachsbracke Club, you pay 660 euros for a puppy plus club taxes of 150 euros and a membership fee of 67 euros. There are also additional costs, such as chipping or vaccination, to the breeder.

You can only buy an Alpine Dachsbracke puppy if you are a hunter. And then you should buy your puppy from a breeder registered in the breeding association or from the Dachsbracke Club. Under no circumstances should you buy badgers that are offered too cheaply without papers. Reputable breeders always sell their dogs with breeding papers and can provide proof of pedigrees. You should also be able to ‘view’ the puppy with its mother before you buy it, so you can be sure that it was raised in a reputable environment.